I have always liked my hands, even now as the hands of a 73-year-old woman. As I look at the wrinkled, thin skin, and the bulging veins, my mind carries me back over the years in contemplation of how these hands have served me.

In my mind’s eye, I see myself as a baby, the youngest of three children, held by my mother in a family portrait. My arm rests around her neck and across her shoulders. My face is calm and trusting, and my fingers are relaxed. Up to that point in my life, I had been the treasured baby of the family, surrounded by love. At that moment in time I had no inkling of what lay ahead – my mother’s life threatening illness only weeks away, and my desperately lonely separation from her for six months or more.

Another picture comes to mind – my fifth birthday party. Europe and my country of birth, Australia, have been at war with Germany for two years, and United States, my future home, has yet to enter the conflict. My English father, a veteran of the First World War, retired from the British Army, had been a military man all of his life. His attempt to re-enlist had been rejected because of his age – he was 54 years old when England declared herself at war with Germany in 1939. Perhaps some of his disappointment had penetrated my world, for in this picture, my face is solemn as my hands clutch my beloved friend, Koala, which my father had given me for my birthday. I now know that things were not easy in my parents’ world. The Depression had hit them very hard, my father being forced to sell the rich farm land he had bought while still in England, and which had drawn him to Australia with dreams of wealth. My family never recouped the economic losses of that time. My earliest memories are of my father’s financial struggles, and of my admiration for him for never complaining as he worked at whatever jobs he was able to get. His example of moral strength has consciously sustained me in my own life as I faced many personal challenges.

As I look at my hands, the strong and not-so-slim fingers, with big knuckles which have always dissuaded me from wearing rings other than for special occasions, I see my mother’s hands. Just as her hands signified long hours of hard domestic work bringing up three children in difficult economic times – no washing machine, no dryer, no refrigerator, no car, no telephone, and outdoor plumbing, so my hands became accustomed to hard, and very often dirty work, as a nurse in training in the early fifties. As a probationary and then junior nurse, my duties included using harsh detergents to scrub bedpans, hospital beds, infant cribs and filthy floors. As I advanced up the training ladder, the cleaning was replaced by almost constant hand washing with disinfectant soap to prevent cross-contamination between patients.

On my one day off from a 60-hour-or-more work week, I would travel by tram and train to my family home on the South Australian coast. There my dear mother would totally spoil me with my favorite meals (which as a vegetarian I still miss) of fried sheep brains, liver and onions or tripe (cow’s intestines). Then I would retire for my one night of complete rest with my rough, chapped and bleeding hands smothered in olive oil and encased in cotton gloves, to repair them as much as possible for my next 7-10 days of work. To this day, I attribute the roughness and dryness of my hands to those early years of severe abuse! But despite the hard work, I loved being a nurse, both as a trainee, and following my graduation, as an R.N. (in the British system called a “sister”), in charge of a whole ward of patients, and later, second-in-charge on night duty of my training hospital.

These hands also enjoyed other activities and pursuits. From age 14 until I started my nursing training at 18, my summers and my weekends were totally focused on competitive sailing or playing competitive tennis. My biggest dilemma, as I remember it, was how to fit in both activities, and sometimes having to choose between them. As a “main sheet hand” sailing small craft, my role was to work the “sheets” (ropes) relative to the wind conditions, frequently in response to curt commands of the boat’s skipper, who happened to be my sweetheart all of those four years. As my skipper, he intimidated me, especially under the tension of a closely-fought race. As my sweetheart, more than four years older than me, he was a gentle and thoughtful person. The calluses on my hands from pulling on those sheets for many hours in all kinds of weather persisted for many years before finally fading. Those same hands had caressed his beautiful face in those happy years we had together, but like my calluses, our romance did not survive the passing of time.

One of my strong desires was to “see the world.” This ultimately led me to sign a contract for two years of postgraduate training in the United States. At the end of those two years, instead of returning to Australia, I met an American boy, a doctor in training, and made the momentous decision to marry and make my permanent home in America. And so these hands became very occupied in taking care of three beloved babies, bringing love and comfort to them as they grew into beautiful young adults. Now all three of them have children of their own, and as a grandmother of seven, much has continued to be asked of these hands in helping care for my grandchildren. As I look at these hands, I am glad that the strength of my parents’ example has given me the confidence to use my hands in whatever capacity required of them, be it as a nurse, as a mother, as a grandmother, or as someone who continues to enjoy many interests and activities in which I can trust my hands to respond with the skill of a lifetime of experience. 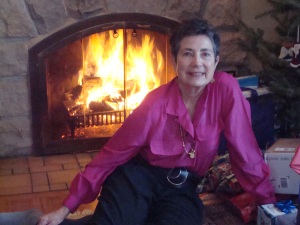 My blog "True Stories Well Told" is a place for people who read and write about real life. I’ve been leading life writing groups since 2004. I teach, coach memoir writers 1:1, and help people publish and share their life stories.
View all posts by first person productions →
This entry was posted in Guest writer, Writing prompt and tagged australia, hands. Bookmark the permalink.

1 Response to These Hands