In my first year in junior high school, I was bullied. In my second year there, I became one of the bullies.

For home room I was assigned to Miss Goss’s class, along with 30 or so other students—the classrooms were already crowded with baby boomers even though the Junior High building was only a few years old. This was Miss Goss’s first year as a teacher.

Eighth grade students can range from about 13 to 15 years old, depending on how early one started school and whether one has ever been held back a grade. Some of the boys in Miss Goss’ class were so big and burly I imagine they had passed their fifteenth birthdays; clearly academic achievement was not high on their priorities.

Since Miss Goss wasn’t actually trying to teach us anything—just to hold space for us to do our homework for other classes—she started from a position of disadvantage. The big boys saw little reason to pay attention to slight, timid Miss Goss’s discipline. They joked around and roamed the room.

Then they came up with a particular torture for her. When she would call for silence, they would momentarily hush up, and then start to whisper. “Roast goose. Roast goose. Roast goose.” The rest of us joined in. The whisper would rise to a chant, and hands on desks tom-tommed a drum accompaniment. Once I remember the principal sticking in his head to ask what was going on.

I took it on myself to add a graphic complement to the torture. I was an old hand at commercial art by this time, having been making and selling greeting cards to my neighbors for years. I took some white contact paper and fashioned “Roast Goose” stickers. One by one I traced the bottom of a jumbo shampoo bottle with a fat black marker to get an oval shape, then drew a long-necked bird in green marker and with red, lettered “Roast Goose” in trippy bubbly letters like those on psychedelic posters. I made dozens of these, and handed them out to the other bullies. Soon they festooned the eighth grade hall.

It was not long after that that we arrived for home room and found a new teacher—a man—in Miss Goss’s seat. “She’s gone. She had a nervous breakdown,” he stated, and let his reproach hang in the air a good long while.

To quote the Red Hot Chili Peppers, “I don’t ever want to feel like I did that day.”

Not long after that the police drug team came to give us an education on what drugs looked like and how to avoid them. The school had clearly identified just what kind of reprobates we were, the bullies of Miss Goss’s home room. The big boys joked around and pretended to swipe the drug samples like nothing had changed, but I could sense there was something different about their swagger.

From then on, as far as I remember, they kept their bullying among the students and left the teachers alone.

Me, I gave up bullying for good. 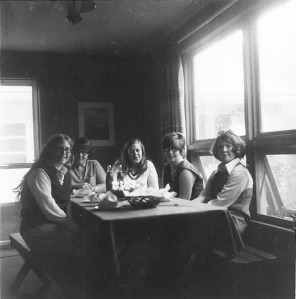 Me (far left) with my Girl Scout friends… I don’t look like a bully, do I?