Ruben turned to me as we stood at the boarding gate and smiled. “No goodbyes,” he said, “I’ll see you later.” I watched as he walked towards his gate, handed over his ticket and disappeared through the entrance.

Since the beginning of our relationship, I knew the Marine Corps would be Ruben’s future. I could see it in his eyes when he talked about it; it was part of him already.

I remember going out to dinner when he returned from basic training. He held a fork in his right hand with his face hovering inches from the plate. He attacked his food like he was back at the chow hall. All I could do was watch.

After a short visit, he left for infantry school. We talked every night on the phone. He told me the only area with reception was near a window where he had to lean out; I imagined him standing with his torso out the window. We spent long hours talking and, though we were tired, we refused to end the calls. Many times, we just listened to each other’s breathing until one of us would drift off to sleep. I think because of the long distance relationship we know so much about each other.

When he came home from training, I learned he would soon be deployed. He joked that if anything happened to him, I would hit the Marine Corps lottery. He wanted me as his wife, his way of taking care of me. Like any other girl I had envisioned all the details of my wedding day — I saw myself in a white dress, him in a tux — saying our vows in a church; following the ceremony there would be a reception with our families present. However, it wasn’t like that; there was no time to plan. We didn’t have the wedding I envisioned, but, still, it was special.

Ruben missed the first flight scheduled to take him back to his post in California. It was no accident when he didn’t wake up in time to drive to O’Hare; he wanted extra time with his family. A quick call to his superiors and he had permission to schedule a flight for the following morning — another day bought. When we arrived at the airport the severity of his deployment began to sink in. Due to the circumstances, we were permitted to walk with him to the gate where we would wait for his flight.

At this point I didn’t know what to say. I admit, I was scared, I can’t imagine how he must have felt. I was quiet because I felt that saying anything at all would make me break down and I wanted to be strong. I gave this time to his parents, to say goodbye. “Take care of yourself,” his dad said and his mom, “pray to God.” He was silent and just nodded, taking in every single word they spoke. He always valued his parents’ guidance.

I don’t think I ever asked him if he was scared. The less I knew the easier it was for me to cope. I knew he was going to be gone for nine months. Nine months of separation. We knew separation, but this was different. I didn’t know how often he was going to be able to contact me or if I would ever hear his voice again.

When it was time to board, it was my turn with the man who had just become my husband. We said we loved each other. He kissed me. I wondered at that moment if it was the last time I would feel his lips on mine. He pulled away; he always had to pull away. I tried to be strong for him but he ended up being strong for both of us. I pleaded, “I don’t want you to go.”  I should have kept quiet. Of course he didn’t want to leave but there was nothing he could do, he had his orders.

In the end it didn’t matter what I said.  He took me in his arms and held me tight. There was so much I wanted to say. The future was full of possibilities, yet nothing was concrete. I could feel tears trailing down my face. Our embrace was short-lived and before I could make eye contact, he turned away.

It could have been the last time I saw him but we didn’t say goodbye. 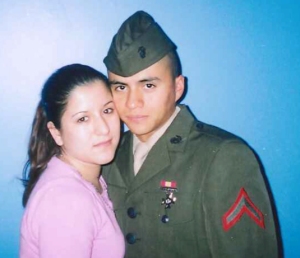 Martha C. Zavala is a reading addict. She reads and writes Young Adult Fiction and Contemporary Romance. She hopes readers appreciate what she is writing. Martha can be contacted via email at: mzavala11188@gmail.com.

2 Responses to No Goodbyes