I am at the Association of Personal Historians annual board meeting and conference in Bethesda November 7-12. Maybe you’ll find me live-blogging from Bethesda, if time permits and ideas emerge. In case they don’t, I’ve prepared a two-part interview with Jerry Waxler, author of Memoir Revolution. Here is part 1 of 2. 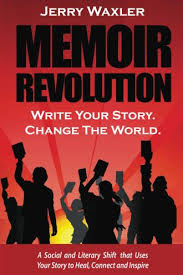 Sarah: We met when I posted to the APH listserv looking for someone to swap manuscript critiques with me–I was working on my combination memoir/how-to book that became Write Your Travel Memoir and you were working on your memoir. Did you already have the seed of an idea to blend personal memoir with commentary the way you have in Memoir Revolution?

Jerry: In around 2003, I showed some writing to a  mentor who said, “It sounds like your ideas are dropping from the sky. Put more of yourself in the writing.” I had absolutely no idea how to do that.

After I had been writing about the memoir revolution for years in my blog, I realized I  was already a commentator on the phenomenon. And when I gave talks, I often spoke in broad  terms about the importance of memoirs in our culture.

Someone at a talk said to me “you ought to write a book about your big ideas” and that seed sprouted into the project of writing Memoir Revolution.

Sarah: – You’ve written other books on how to write a memoir and you also have your “Four Elements” book. How is this book different?

Jerry: I consider my three books to work together. This one is the why of writing a memoir, and my Learn to Write Your Memoir provides the basics of how. The third book is self-help for writers.

I found that in order to become a writer, one must overcome all sorts of emotional obstacles. I wrote Four Elements for Writers as a way to pull together a variety of self-help information and apply it specifically to writers. At the time I was giving workshops for writers, and the Four Elements book emerged from the workshops. Recently, based on the work I’m doing with memoirs, I rewrote quite a bit of Four Elements and am re-releasing it as Writing Revolution this year.

Sarah: I’m interested in the structure of Memoir Revolution. You have blended personal memoir with commentary. In my book, Write Your Travel Memoirs, I purposely kept the memoir example separate from the teaching points. How did you decide on your blended approach?

Jerry: Before I answer the question, I want to thank you for asking it. This is a writing structure I have been attempting to achieve for years, and the fact that you and others have seen the book in this way makes me really happy.

Since the 1980s, I have been intrigued by the genre called Creative Nonfiction. Back then, I read a book by Tracy Kidder called Soul of a New Machine. I was fascinated by his almost magical ability to transform the invention of a computer into a page-turner. Somehow by staying up all night, listening to a bunch of passionate engineers worrying about meeting deadlines, he turned an engineering problem into a fascinating story. I had already been reading books about writing for many years, and started putting books about Creative Nonfiction into the mix.

When I started writing about the cultural shift that was enabling an increasing number of people to start thinking about their lives as stories, I realized it was a perfect opportunity to use my own story as the glue that held it all together.

Sarah: We met  in 2009–how did your process unfold from there to publication in 2013 of your latest book?

Like all my first-draft writing it started as a grab bag of big ideas. I began to fill in the details with research. I studied books about social trends and read memoirs. By writing about memoirs, I turned each book I read into a training lab. And my regular writing helped me develop my voice. During that time, I was developing my own memoir, learning from my own experience as well as getting feedback in critique groups.

I was working on my memoir, writing my blog, and revising Memoir Revolution. I gave it to one editor who filled it with so many comments, I became overwhelmed and put it away for a year. When I regained my courage, I kept revising, shifting things around, looking for the best structure, and every so often, once or twice a year, sending it out for a reading by an editor. When I finally started to get rave reviews from my critiquers, I knew it was ready.

Sarah: – Thanks for the reminder that most published books go through many rounds of revision. I’ve heard the average is seven drafts before a work of creative nonfiction is published.

Next topic. You write about the shift from memoirs about celebrities and heroes to the stories of ordinary people. Why did you choose to characterize that as a revolution? As a child of the 1960s (and a veteran of the strife on the UW-Madison campus) does the word “revolution” hold special meaning for you?

Jerry: Good question. In my mind, the word revolution means that masses of people demand social change. My fascination with the word started in grade school. I grew up in Philadelphia, and we were taught to be proud of our region’s role in the American revolution. In high school, I often rode the subway into the city center and walked around gazing at buildings and monuments from the American Revolution.

You’re quite right to point out my connection with the massive cultural upheaval in Madison, Wisconsin connection. In addition to war protests, young people were challenging everything. From the time I entered college in 1965 to the time I left in 1969, I felt like I had come through a revolution.

As a trend-watcher, I am excited to be reporting about a new social revolution that is allowing us to delve into our own lives and shape them into stories.

Sarah: – Your book intertwines your own story with your thoughts on the role of memoir in our culture. Was it hard to reveal so much about yourself?

Jerry: Ten years ago, I wouldn’t have been able to imagine revealing anything about myself. I’ve always tended to be shy. Shame and privacy have always been powerful forces for me. However, since I began writing my memoir around 2004, my attitude about disclosure has changed dramatically.

By writing stories about myself, I see them on the page, polish them, and learn to see myself as a character. Writing gives me a little distance from the memories, and makes them more shareable. Also, in critique groups, I swap scenes from my past with fellow writers. There’s nothing like listening to three fellow writers talk about your character to accustom you to thinking of yourself in a more open way.

As a workshop leader, I love the opportunity to help other aspiring memoir writers break through walls of shame and privacy. When we share bits of our lives in workshops, we give each other the gift of social connection. Instead of remaining stuck forever with secrets, we help each other experience openness.

Sarah: You’ve articulated one of the most fulfilling aspects of teaching memoir workshops for me, too. The fall of the “Berlin Wall” of shame is a fundamental aspect of this memoir revolution, isn’t it!

Tune in next week for Part 2, in which Jerry and I discuss chronology as an organizing principle and the search for new myths.

My blog "True Stories Well Told" is a place for people who read and write about real life. I’ve been leading life writing groups since 2004. I teach, coach memoir writers 1:1, and help people publish and share their life stories.
View all posts by first person productions →
This entry was posted in Book review, Commentary. Bookmark the permalink.