Nirvana at Table in Umbria

Posted on May 21, 2014 by first person productions

The season of vicarious wanderlust on True Stories Well Told rolls on…. send me YOUR travel essays, up to 1500 words! -Sarah White

In 1991, I was selected to be part of a Rotary International Group Study Exchange. The program’s mission was to build international friendship through professional exchanges. A group of five “outstanding young professionals” were chosen from central Wisconsin to exchange visits with a team selected by a Rotary district in central Italy. With our Rotarian hosts we toured factories, gave our speech about Wisconsin at their Rotary Club meetings, and ate. Unbeknownst to us, the Rotary Clubs hosting us were competing to see who could put on the most glorious feasts. We were unwitting but willing pawns in this game.

Our “outstanding professionals” consisted of three other women, Jenny the journalist, Rita the postal worker, and Mary the realtor, plus Ron, a carpenter loaded with more charisma than was good for him, and our Rotarian leader, Bruce. Having summarized our five-week Italian extravaganza elsewhere, I will now dwell on the second-best meal I was served. I won’t burden you with a description of the first-best meal, the District Governor’s Banquet in Campobasso with which our trip concluded—it might hurt you to know such wonderful meals exist.

The experience I am about to describe was just “a little meal at a trattoria,” we were told.

After a morning of touring an Umbrian olive oil producer and an egg factory, we freshened up back at our hotel, then piled into the Rotarians’ minibus for the short drive to La Fattoria, a restaurant on the outskirts of Spoleto. In the midday sun we unloaded before a simple façade, which gave way to a dark interior. It was filled with an aroma of roast meat and garlic coming from a huge open grill at the back of the room. We were led past it to a private dining room and seated around a long table. There were about a dozen of us including the Rotarians and their wives, a daughter or two brought along to translate, and a journalist covering our visit for the Spoleto newspaper.

A torrent of food was about to pour over us.

It began with a trickle. Appetizers were brought: tiny rounds of crisp toast, spread with a dark truffle paste. Waiters speared tissue-thin slices of prosciutto onto our plates, and urged us to try their local delicacy, the sheep cheese, pecorino. Its crumbly salty tang made me thirsty.

Bottles stood poised at the ready, up and down the table, red and white wines, and bottles of water, “gazata” and “non-gazata”, with or without the bubble.

Our hosts filled glasses for us. Conversation swirled around, the exchange-student kind. What have you seen since you got here? How did you like Terni? You’ll like Spoleto better. Tell us about where you come from.

I was tired—we had been escorted through activities from 6 a.m. to midnight every day since our arrival five days ago—but becoming happier by the moment under the influence of the never-empty glass of smooth red vino de tavolo. The wine and the delicious appetizers began to relax me. The waiter didn’t need to disturb me with more food, but he did.

“Tartuffe, specialité de Spoleto,” he said. The dish he offered me was tortellini and the sauce was again of the earthy mushroom. To me “truffles” had always meant expensive chocolates and I was intrigued by this musty brown stuff. Its flavor was as strong and wild as the mountains around us. There was something randy in that flavor, a salty earthiness that reminded me of semen. My eyes met those of a man across the table. He looked as if he knew what I was thinking. I quickly took cover in the conversation on my left, where Jenny was listening to the journalist describe a local scandal.

Another wave of food broke over us. Waiters brought huge platters of lasagna, spooned layers onto our plates. More wine was poured. Jenny whispered to me, “how much more food can there be?” I had no idea. It was an odd sensation, and we let go into the endless stream of delicious food washing over us.

Following the dense lasagna came a lighter dish, this time a freshly-made linguini knapped in a silky white sauce with voluptuous morsels of asparagus and sausage stirred in.

All around us conversation flowed, a murmur that began to sound like rain. Some spoke in English, others in Italian. I followed what I could and nodded and smiled when understanding ran out. In Italy it is perfectly acceptable for a woman to contribute nothing more than her decorative appearance. Silence and smiles were all that were expected of me, and I was happy to oblige.

I was discovering another grace of Italian life, the grace of a delicious meal taken in leisure. This was food as art. Food as a dance, scripted in a choreography of flavors. It was as carefully programmed as a symphony. Each course created its own mood, suggested its own emotions, comfort or passion or daring. Bland pasta had answered the opening challenge of sharp cheese and prosciutto; now hot roast meats with spicy odors of garlic and rosemary woke us from the pastas’ creamy lull.

I was seated on the cusp between two conversations, able to tune in to either or to drift quietly by myself. I noticed a man at the far end of the table, also unspoken to. I pointed this out to Ron, across the table from me, and he replied, “ Don’t you recognize him? He’s our bus driver.” The driver had walked in with our party uninvited, and was now being snubbed by the Rotarians.

Veal shortribs came around on the waiters’ arms, followed by roast chicken. Conversation slowed as we applied knives and forks to the delicious food. It did not take long to disappear, in spite of the mountains we’d already consumed.

Jenny whispered to me, “Italy…where too much is never enough.” We giggled tipsily. Ron shot us a dirty look, then returned to his conversation with the pretty translator on his left.

In a show of mercy, the waiters now brought lighter fare, vegetables both hot and cold, tiny fried potatoes, marinated green beans, asparagus baked in a quiche. For the first time I tasted radiccio, its licorice bite a perfect refreshment to our overworked palates. Conversation picked up again as we found our second wind. There was a reverence in its tone. The sharing of food had been a communion.

Again the bottles of wine and water were passed around the table, new ones brought to replace the dozen or so we’d already emptied. A light sweet wine complemented the dessert that now appeared. We were each presented with a pastry, a golden sphere filled with chocolate and whipped cream inside its flaky crust. And to follow that, the principle of contrast was again observed—tart crisp fruit was brought. I watched as the men took paring knives and carved slivers with quick, graceful movements. I was hypnotized by the simple gesture.

Finally, exhausted, we laid down our silverware and took refuge in espresso. For a moment no one spoke.

Distantly I heard music from the dining room. John Lennon singing “Imagine.” I drifted in tranquility evoked by the dreamy song, lulled in that perfect satiety one can only reach either through prolonged sex or a good meal. My every sense was satisfied, my every hunger filled.

“Imagine all the people…living for today…”

Fifteen plates and three hours had passed. We stumbled to our feet, boarded the Rotarians’ minibus and headed to dinner. 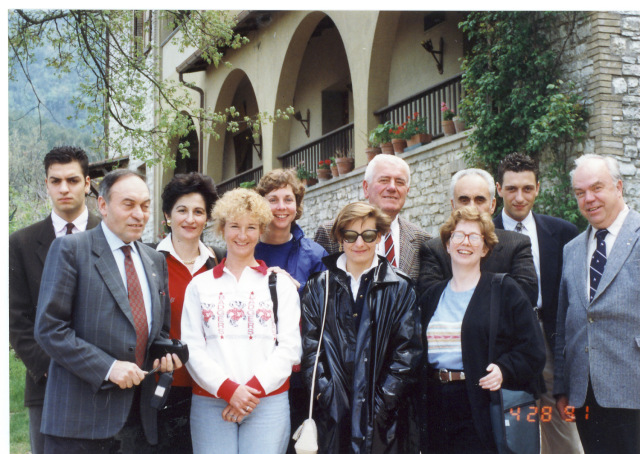 The Wisconsin Group with members of the Spoleto Rotary Club. That’s me, front row, far right.

My blog "True Stories Well Told" is a place for people who read and write about real life. I’ve been leading life writing groups since 2004. I teach, coach memoir writers 1:1, and help people publish and share their life stories.
View all posts by first person productions →
This entry was posted in Sarah's memoir and tagged La Fattoria, Rotary Club, Spoleto, travel. Bookmark the permalink.