This is part 1 of a 2-part reminiscence about Kaye’s childhood home.

I am the youngest of four children who grew up on a small Wisconsin dairy farm in the 1950’s and 1960’s. My Dad was the dairy farmer milking about 22 cows and working about 100 acres of a 160 acre farm. Both he and my mother grew up on farms about 15miles away from each other. The farm we lived on was where my mother grew up, and was homesteaded by my Mother’s grandparents. I slept in the same room my mother did and went to the same school she did. Like many things in life, I didn’t really appreciate the lineage I came from until much later in my life.   My parents planted a large garden and my mother canned vegetables and meat and they both respected the land as their close friend and took care of it as the fragile part of life that it was.

I loved being outside on the farm and especially loved being in the barn. My Dad loved his work and would often sing as he was doing the milking and always enjoyed the regular visit of a neighbor coming from town to dig up worms. The barn was built on a stone foundation with walls about 12 inches thick. There were windows on the north, south, and west sides with deep window sills that could hold most anything. The outside boards of the bar were painted red which in my memory had faded from what used to be a bright barn red, to now a dull shade of grayish red. The barn was built in about 1885 and had electricity, but no running water.   The cows would have to be let outside everyday so they could drink from the stock tank as it was called that was attached to the milk house just across the barnyard.   The milking level of the barn would be quite cool in the summer and in the winter even though there was frost on the inside of the walls, the air was warm and sweet from the cows. The barn smelled good most of the time. My Dad cleaned the manure every day from the barn by hand scooping it up and carrying it a few steps out the door to a waiting manure spreader. He would also white wash the barn walls every spring. I loved the barn after a whitewashing! It smelled like a fresh spring day and was as clean as a whistle!   The best time to be in the barn was during the late afternoon milking. My dad would be doing the milking from about 3:30pm until 5:00pm and that is where I would be too.

I would follow my Dad around while he did his chores and as I got older I would help him more. I was always full of questions about how the milk machine worked or if cows had a memory. My Dad answered my questions and was always willing to let me help, but I think he liked it best when I would play my own pretend games and he could do his work without interruption. So, the barn became this magical place where anything could happen and I could go anywhere I wanted. It was my own theatrical stage where I could be the main character and every part of the barn became my background and set for whatever need I had. 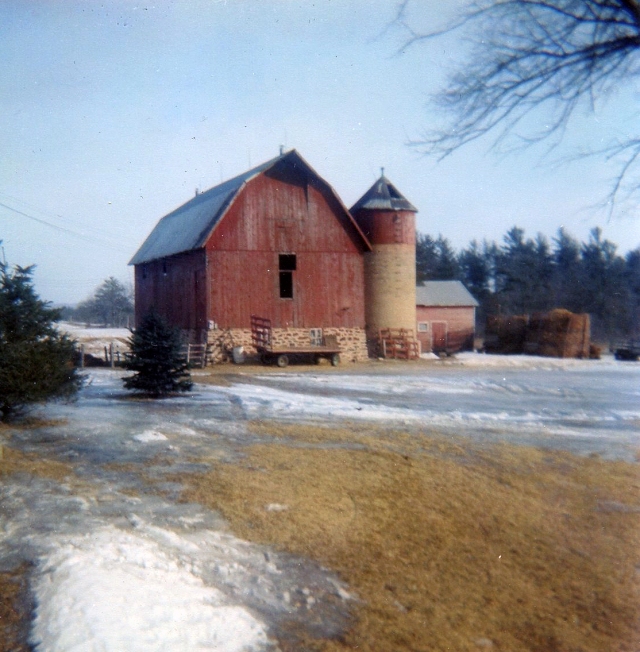 There were times the barn was a school house and the cows my students. I remember imagining that the white on their faces was the paper they would use to write on. On the southeast end of the barn there was a pen for heifers and an off the floor manger for their food. I would stand up in this manger as the teacher and direct the cows in their learning. Sometimes I would get carried away and shout my directions and one or two cows would jerk in surprise. My Dad would simply say, “Be careful so you don’t scare the cows”. I remember taking a nail or anything I could use as chalk and write on the walls or beams of the barn as I played “school”. The walls of the barn were whitewashed about once a year, so they made a perfect “chalk board”.

I had cousins that would visit often from Minneapolis and they too loved the barn. We often played “hotel” in the barn. It must have been the idea of my city cousins, as I don’t think I’d even stayed in a hotel yet!! Each stanchion was the door to a room and we used the feed bin as a desk for the hotel workers. On the wall in the barn was an old spice cabinet with several drawers. We used that to store the room keys. Any nut or bolt could become a room key and we fixed a chain with a hook on the end to use as our telephone. Of course preceding all this “play” was cleaning! We would sweep the main walks of the barn and wipe off the feed bin. We surely had a five star hotel with only the finest guests!

The barn always had many cats meowing and looking for attention. They usually were part of the play for me and I sometimes would dress them up in my doll clothes and try to get them to ride in an old black buggy that I used for many years as a play thing. I don’t think the cats liked wearing clothes, but I think I was always gentle and gave them lots of love. There were lots of times my Dad would say there was a mother cat that had a batch of kittens in the hay mow. I couldn’t wait to see them and hold them, but my Dad always taught me to be patient and the mother cat would bring them out when they were ready. This usually happened unless I got too impatient and went searching for them in the haymow myself!   The cats had their own dish in the barn, where my Dad would give them a splash of warm milk and they would all gather around it to lap up the milk ever so grateful my Dad hadn’t forgotten them!

There were times when a calf would be born and after the mother would clean and lick her calf, my Dad would carry the calf to a special place with new, clean straw. I would lay with that little calf stroking its fur and sometimes putting my head on its side until its mother would give me a look and stern MOO! When it was time for the calf to be weaned my Dad would show me how to let it suck my fingers in a pail of warm milk. It was a messy job as the calf would usually be really hungry and want that milk so bad, but not really know how to get it from the pail into its mouth and swallow it! It took a few tries, but eventually the calf would drink smoothly with little or no dripping of milk.

The haymow was another magical place. It was the best smelling place in the barn when the haymow was full of new baled hay. I could understand why cows liked hay. I could almost eat it myself! As the days went by and number of hay bales dwindled, that’s when the fun began! Climbing up high on the bales felt like the top of a mountain. It gave me power! When my city cousins would come, we would carry and move many bales to make tunnels, houses, and even stack them to make higher mountains. My Dad was pretty particular how the bales were stacked to be able to get the most in the hay mow, but when my cousins & I were done, it never looked the same. And my Dad never said a word!

When I was in high school, my Dad stopped using our barn and rented the neighbors barn just down the road.   It was a bigger barn with barn cleaner and drinking cups for the cows to get their water at the stanchions! It was a short walk through the woods and was much easier on my Dad. The plan was to tear down our old barn and someday stop milking cows altogether. In 1972 the barn came down. My Dad salvaged many things from it. The barn boards have become walls, bird houses, and picture frames. The old condenser milk cans have been painted and used for stools to sit on. Some of the barn beams have been built into a cousin’s cabin and others made into tables. The spice cabinet has been refinished and hangs now in the new farm house on the property.   The barn is gone and only pictures and my wonderful memories remain.

Kaye lives in Monona, Wisconsin, and keeps her country roots close to her heart. Along with writing, her interests include music, traveling, children, and the elderly.