The “Season of Sports” continues…

By Leslie Howard, reprinted with permission from What She Said

Like many women, I didn’t recognize my foray into the women’s movement for what it was until years later.

I attended Lafayette College beginning in 1972. Lafayette had just gone co-ed, and like many men’s engineering schools this was a big deal because the process of bringing women in and ensuring that they had an equal experience and opportunity was the challenge of the day. The administration was very diligent in its efforts to make everything available to the women on campus.

One night when I was doing laundry, I noticed a flyer recruiting a manager for the varsity men’s football team. Male or female! I loved football, and aside from me playing on powder-puff teams, football was not an option. Managing a team sounded fun. So, I inquired. They accepted me, and what ensued was probably the best education I ever received in how to work with men.

I was the first woman manager of a varsity men’s football team in the country. As soon as the athletic department figured this out, it was all over the papers. This attention was not something I expected or sought, and it did challenge my relationships with the players for a time. But in the end, I got to be a part of the team, even in the locker room at halftime—yuck—and earned my stripes by doing every dirty, difficult, crazy job they threw my way.

I learned that anything I wanted to do was open to me. I also learned not to back down in the most masculine of male environments. But come sophomore year, I had to ask myself, did I want to continue to help the guys play a sport they loved, or did I want to explore competition myself? I joined the newly formed women’s swimming team and women’s softball team.

I will ever cherish the opportunity Lafayette afforded me to break some barriers. After my Lafayette locker room experience I no longer had any limitations in my consciousness due to my gender. 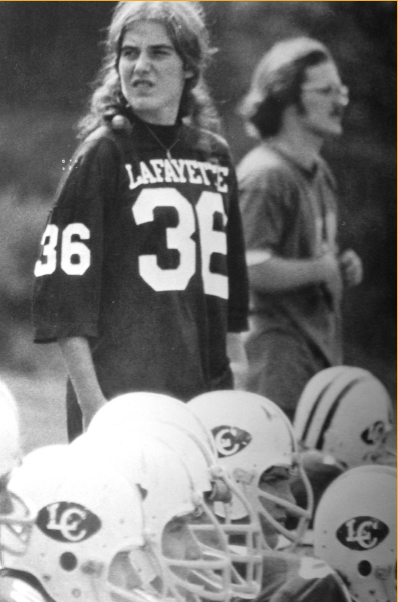 Leslie Ann Howard received her degree in Psychology from Lafayette College in 1976. Soon after she moved to Madison, WI. where she earned her MSSW from UW-Madison. Leslie is currently the President and CEO of United Way of Dane County in Madison where she enjoys her family and has continued an active recreational sports career participating and coaching.

Leslie’s essay originally appeared in What She Said, a book created for the 20th anniversary of AFFW. It includes stories from 70 women about their experiences navigating career and family life as a woman. To get your own copy of What She Said, contact Melinda Heinritz at affw@madisoncommunityfoundation.org or (608) 262-1763.

Essays welcome for the “Season of Sports.” Your writing prompt:

You didn’t play or you did play or you took the middle ground. You were male, or female, or transitioning between one and the other. What was the role of sports in your life as a young person? What has the impact of that been on your life since?

See guidelines for submissions here. Play along and send your sports story for publication on True Stories Well Told?

My blog "True Stories Well Told" is a place for people who read and write about real life. I’ve been leading life writing groups since 2004. I teach, coach memoir writers 1:1, and help people publish and share their life stories.
View all posts by first person productions →
This entry was posted in Guest writer and tagged Football, sports, Title IX. Bookmark the permalink.