The Road or the Scholar

I wrote this piece after Diane Hughes read her “Post Office Truck” story at a meeting of the First Monday, First Person salon earlier this year. How many of my generation were seized by a desire for a life of adventure on the open road?

My mother turned her head toward me from the sink where she was washing dishes.

“When are you going to decide about which of those colleges you’re going to?”

I was sitting in my usual place on the stepstool, keeping her company, but not actually helping.

“DePauw looked nice,” she continued. Its rows of sorority houses hemming a quadrangle of Georgian brick buildings flashed into my mind’s eye. It looked like an insurance company headquarters and I wanted nothing to do with its Greek life or anything else in that Squaresville.

“I’m not going to college.” I replied. “I told you, I’m going to buy a van and outfit it with a grindstone so I can make money sharpening people’s knives and scissors. Then I’m going to travel wherever I want.”

“Oh no you’re not!” she declared. It was 1974, and similar scenes were playing out across the nation that spring among the Baby Boom traversed. There were 4.2 million of us in the U.S. preparing to graduate high school that year. After Charles Manson and Jim Jones, our parents had ample reason to fear for our safety after we left the nest.

Living and working in my traveling camper-van had been my ambition since the previous summer. I had gotten a job at the Can-Do kiosk down at the Glendale Mall on the north side of Indianapolis as soon as I got my drivers’ license. The job required operating the lathe to cut keys and the grindstone to sharpened knives and scissors. I also engraved anything from plastic nametags to silver christening cups, baked off rubber stamps in a sort of toaster oven, and sold key chains and coin purses from my 10 x 10 foot stall.

When I announced this plan to my parents the previous summer, when I had a final year of high school to complete, I didn’t hear any objections. At one point my mother and I even talked about buying a Toyota Chinook camper together. I had been operating under the assumption my life as an itinerant gypsy would begin the summer after graduation.

To me, it was a given that I was outward bound, the hippie scene my destination. I had sullenly but silently accompanied my mother on the campus visits that are a rite of teenage passage, all of them small schools within a few hours of home, full of earnest conservative students untouched by the activists and hippies who had been making news at the big state universities. Going along to get along, I barely registered which schools or where. I knew I wasn’t going to end up in any of those places.

I may have been technically living at home, but I was spending most of time with my newfound family of friends from Indianapolis. We were loosely organized by Marty, and usually transported in his Volkswagon microbus. We hiked and tripped in state parks, we went down in caves with miner’s hats and canteens of rum, we smoked pot in bedrooms and basements with esoteric jazz on the turn-table and towels under the door. We daydreamed of a future where we would all go to California, or to Boston, to find or found a commune somewhere.

My parents were my jailors, controlling me with the car keys and with cash, allowing me out for good behavior. Meanwhile, my own earnings began piling up to the point I could begin to plot my escape.

I had always loved camping, and the idea of a permanent life on the road seemed ideal. Once I learned a practical, portable skill, it seemed to me I had everything I needed to put the plan in motion. Nightly I lulled myself to sleep with visions of pulling up to town squares and hanging out my “Knives and Scissors Sharpened” sign, or if I was hungry, going door to door in some neighborhood. I saw adventures unspooling with people I met along the way, just like in the TV show “Then Came Bronson.” My soul would expand with my horizons, and I would become a bold young woman, not an adolescent girl hiding her bad behavior from her parents.

Naturally, I was totally shocked to hear my mother’s answer. “No! Under absolutely no circumstances are you living in a van. You are going to college.”

This was the make-or-break moment. I had never openly defied my parents. Now my choices were either give up their approval or give up my dream.

I gave up my dream.

In the next few weeks, Marty set my new course by announcing he was going to Bloomington in August to start school at Indiana University. Two more of our little family of friends followed suit. Suddenly it was looking like my entire crew was decamping to Bloomington.

Again in the kitchen keeping my mother company while she did the dishes, I announced, “I want to go to I.U.” Instead of showing me happiness that I was coming around on the education front, she looked worried. Yes, my brother Dave would be there, starting his sophomore year. But she knew I wasn’t ready for the confusion of a student body of 40,000. Still, compared to seeing me drive off in a van with a grinding wheel, it was an acceptable compromise. “Let’s get that application started,” she said. 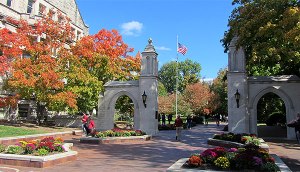 With roughly a month until Freshman Orientation, we both began on the preparations we thought necessary. She filled out financial aid forms, and gave me money to buy clothes. I purchase five chambray work shirts, two long sleeved, three short. She was exasperated. “What were you thinking? Five of the same shirt!?”

“They won’t be the same,” I explained. “I’ll embroider them.” And I got to work with needle and floss.

I used my own money to purchase a stereo, with brother Dave advising me. I spent almost what the van would have cost me on a high-end Pioneer turntable and amplifier, and a pair of speakers each the size of a mini-fridge. When we brought them into the house, Mother was beyond exasperated. “What were you THINKING! You’ll be living in a dorm room. Where will you fit all that?” I didn’t have an answer, but I knew, somehow, I had made the right decision.

On move-in day at the freshman dorm at I.U., a boy spotted my mammoth stereo and struck up a conversation. “Can I borrow that for a party this weekend?”

That scene was to repeat itself throughout my college years. Much more than my embroidered chambray shirts and bell-bottoms, that stereo gave me the power to attract the opposite sex. I never regretted the purchase.

And yet that alternate universe still haunts me, that future in which I bought the camper-van and grindstone and drove west, sharpening scissors and knives. Somewhere a ghost of me had adventures with people I met along the way, until I found the place where I belonged. Where is she now? 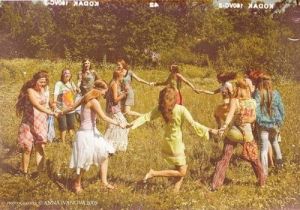 2 Responses to The Road or the Scholar