“Just One of the Guys”

Posted on May 24, 2017 by first person productions

I wrote this essay during my “Write Your Way to a Better Attitude About Money” last winter, in response to a prompt asking ““Have you ever been harassed or bullied on the job?”

It didn’t occur to me at the time to view it as harassment, but I think being pressured to watch stag films on the job, draw dirty cartoons, and watch my coworker sunbathe naked counts as a “yes.”

I was hired to help Jana in the art room. On the production floor, the boys (and most really were boys, only Claude and Mark were closer to 30 than 20) stood at stations around lazy-Susan-like silkscreen machines, wiping ink over screens onto t-shirts and sweatshirts and caps. Jobs were clearly gendered here.

I quickly became proficient at creating the art to make the team logos, band names, and corporate messages our customers ordered. I applied my artistic skill to filling requests for Bucky Badger in every conceivable position from picnicking with Betty Badger to more X-rated behavior.

The job was likeable enough, although Jana annoyed me with her insistence on calling her friends “gals.” Considering myself a staunch feminist,* I preferred to claim I was a “woman” but Jana was pushing 30 and getting a little uncomfortable about that.

The boys on the factory floor stopped work every day for lunch and a break out back of the shop. It must have been summertime because Claude would strip naked and sunbathe. The others took off their shirts but even though he preached nudity like a religious zealot, no one went “Full Monty” but Claude. Jana and I enjoyed the show, fully clothed. 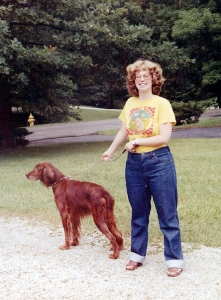 Me circa my screenprinting job

There was a lot of semi-profane joshing among the boys, “just locker room talk” you might say. A dumpster out back had a sign on it that read, “Caution: Load in rear.” For some reason the boys thought that was hilarious; one even bribed me to make a stencil of it so they could print it on some t-shirts. I never did puzzle out what was so funny, but just the way they snickered, you knew it had to be dirty.

Claude may have been the one preaching nudity but it was Harv, the boss of the operation and the only one with an office, who instituted the stag film Fridays. He had a VCR in his office and everyone would pile in to watch—Jana and me too, because who wants to be the girl who’s too prudish to let the boys have their fun. It wasn’t fun–where is the turn-on in grainy pump-and-bump in a dingy office at midday surrounded by your coworkers?

By Christmas, like so many situations that were once kind of cool and fun, this job had just become one petty harassment after another, with all those stag films,  f*cking Buckys, the naked coworker, and all.

Soon enough I found another job and got out of there, only to face another kind of harassment—religious discrimination disguised as teasing. But that’s a story for another time.

*In 1979 you could consider yourself a “staunch feminist” and still not be aware that feminists don’t have to be “just one of the guys” when the guys are objectifying women.