Posted on May 31, 2017 by first person productions

Our 4H club had an annual event called “The Better Grooming Contest.” I won the contest the first year and each of the following years I entered, but I understood this contest was not about what the official language said it was about. If they judged by those standards, a different girl would have won.

Several weeks before the contest, Mom took me shopping. We looked at a number of outfits until we found something that would work for the contest and be my “good “casual summer outfit. I remember how much I loved the color of the pair of pedal pushers, a fairly bright coral color. With it was a white crop top with three diagonally placed squares that formed a zigzag bottom of the shirt that only partially exposed my midrift. Mom wasn’t sure about that much exposure but compared to other fashionable tops, it was modest.

The Saturday before the event, Mom took me to the beauty parlor to make sure my hair was freshly trimmed and shaped. The night before the contest, Mom helped me wash and set my hair in those awful pink rollers that I had to sleep in. Usually I only did that for Sunday but my hair took so long to dry that I needed to sleep in the rollers to get my hair to form some curl as my hair always wanted to be straight. Mom did my nails and she told me to be careful of them the next day at school. 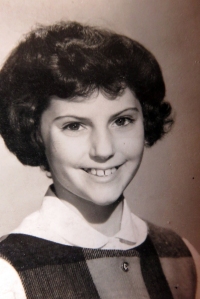 On the actual day of the event, I came straight into the house. Dad knew that even my regular chores were to be taken care of by him since I didn’t want to “smell like the barn” for this special evening. By the time I left to go to Mrs. Jordan’s house, my entire body had been scrubbed, my hair more pouffed with back combing and hair spray, and just a bit of makeup, a pale natural lipstick and light mascara. I looked good and I knew it.

Throughout the evening, as first one girl and then the next was called in to be scrutinized, I sat very carefully, afraid to eat the cookies or drink the punch, as I didn’t want to wrinkle the clothes or mess up my lipstick. When it was my turn, I carefully rose using the way I’d been taught ladies stand up from a seated position. Inside the bedroom used for judging, Mrs. Jordan and two other women took a close look at my hands. They noticed the perfect white of my new tennis shoes and the coral socks that matched my pedal pushers. They had me turn and walk across the room. When it was over, I was so relieved to go back in the other room where now I felt free to have punch and cookies and laugh with my friends.

My friends, Linda and Kathy…they’d had a very different preparation for this event. Kathy’s mom washed and ironed her dress, probably, and perhaps helped her with her hair but they didn’t consider this very important. Kathy looked fine but mostly she looked like she did every other day of the year.

Linda, though, took it very seriously. Weeks before, Mom had taken Linda and me to the Mall so we could buy fabric to make clothes. Linda had been saving her baby-sitting money and wanted our help to learn to sew. I remember Mom helping Linda buy fabric that wouldn’t wrinkle as easily and a color that would go with several of her tops. I don’t remember what I bought but Linda bought a drab olive green heavy cotton and a pattern for a wrap around skirt. She was pretty new to sewing and I tried to help her. Before she cut, I went to her house to make sure she had it laid out properly. The basic pieces went together well but the strip of fabric that formed the wrap-around’s tie required quite a bit of hand sewing. She got it done but not without her mom yelling at her that if she didn’t put that damned thing down and fix dinner she would throw it away. Mrs. Alison was an alcoholic who was always yelling at Linda or her brothers about something. The father was just as bad but at least he usually wasn’t at home. Linda, by the age of ten, did most of the cooking, cleaning, and laundry.

My mom and I talked often when I came home from Linda’s house, confused by what I saw. And I didn’t tell her half of what went on there, like the time Mrs. Alison chased us into the cornfield with a baseball bat. I was terrified but Linda said she wouldn’t ever really hit us with the bat, she just wanted to scare us, but I came from a home where if my parents said they were going to do something, it got done so she scared me!

On the night of the Better Grooming contest, Linda cooked dinner and did the dishes. After that she rushed to shower and fix her hair. Then she put on her first pair of nylons which she had practiced putting on several times, and the only pair of shoes she had which she had polished the night before. When we went to pick her up, she came running out. We barely had time to check out her new skirt. Mom and I told her she looked really nice. In the car as we drove away, we helped her put on just a bit of lipstick which it was understood had to be gone before she went home.

As the evening wore on, Linda became nervous, and when she was called into the other room, I was nervous for her as well. I hoped the comments would be kind. Linda was already pretty chunky and her clothes didn’t fit her well as the plaid shirt was a tad too tight. The skirt had turned out really well considering her lack of experience but it wasn’t perfect and the shoes showed their age.

When she came from the room, she looked down and avoided my gaze. I was furious before I even knew the details. I later learned that they had criticized the top-stitching on the skirt and pointed out that the tight shirt made her look even heavier. She was told she needed to lose weight. They also told her she should wear brown shoes with green. They probably didn’t mean to be mean but I knew that Linda felt terrible even before I knew what they’d said.

I am still ashamed that when I won, I didn’t say the prize shouldn’t have gone to me. If we really were being judged on the effort that went into grooming, the prize should have been Linda’s. Except even then I understood that Linda would have only been more humiliated. When my win was announced, I simply stood up and walked over to collect my blue ribbon. I looked down as they told the details of why, which embarrassed me. They thought it was my shyness and modesty but it was anger and shame. I felt that their explanation was just rubbing salt in Linda’s wounds. I still don’t know what I should have done but it felt entirely wrong to just stand there.

On the way home, Mom asked how it went. She understood something of what I felt when I said I’d won but only because they liked my top. She wisely did not press for details. We dropped Linda at her house and waited until she was safely inside. Mom only then asked what happened. I just started crying. “Its not fair!” “Linda worked really hard to make that skirt and they said it wasn’t stitched good enough.” That was the only detail I’d gotten out of her about her time in the room. Mom didn’t know what to say to comfort me, and just said the good Mom platitudes that she was proud of me for helping Linda and being a good friend. But I was not comforted and felt such a strange sense of guilt and anger, complicit perhaps I might now say in an unfair abuse of power. But my language then was now nuanced enough to find words to say what was wrong. More details came out over the next few weeks and it didn’t help me forgive those old biddies one bit.

For the next several years, I entered the contest feeling much ambivalence. I was mostly making my own clothes by that time and an A-line skirt was a one evening project, so my effort to earn the prize was to tackle something more challenging than anything I’d done before, pretending that that was the reason I won. Each time I went into the bedroom to be judged, I felt torn. I wanted the approval and I wanted to win but I always carried some of Linda’s hurt with me and my old anger. She never again entered and I never told her I won again. We both knew it was a sham but she probably understood why I needed to do it as well as I knew why she couldn’t.

But as my mom told me that night, life isn’t always fair. What she didn’t tell me was that the unfairness is so deep that the Lindas of the world have few options; even heroic efforts rarely allow them to break free of those constraints. That night taught us both that the divide between us was wider than we’d known. When she got pregnant shortly after graduating from high school, her parents made her marry a neighbor boy who wasn’t the father, a boy we all made fun of but who was willing to marry her and raise the child. I cringe whenever I think of her life on that dreary farm down the road with that man in that dilapidated four-square farmhouse, cooking and cleaning and doing laundry for the large family that included her alcoholic father-in-law. She died of ovarian cancer when she was barely fifty. When I heard, my main response was relief that she no longer had to live that miserable life. I hope she found small pleasures in between her chores, that her relationships with her children brought joy to a life that seemed pretty grim.  Life just isn’t fair sometimes, and I wish I didn’t know that.