Wallace Stegner’s “Crossing to Safety” and the Rolling Now

While staying at Windhorse Farm leading a writing retreat in Nova Scotia in May, I ran into an old friend—Crossing to Safety,Wallace Stegner’s 1987 novel and one of my favorite books of all time.

I began reading it again, and noted the page on which I stopped when departure day came. I have the same edition on my bookshelf at home, and once home, I picked up where I left off.

I first discovered this book early in the early 1990s. I recall reading it three times over, in quick succession. This was just as I was returning to my childhood writing ambitions, and Crossing to Safety was the book I wished I were author enough to write, the book written in just the literary style I hoped someday to master.

It’s a novel about “a long, not-always-easy friendship between two couples,” the back jacket of my first-edition paperback states. Early chapters take place in Madison, Wisconsin, where I live, and perhaps that’s the “hello” it had me at on that first reading.

But more, it was that not-always-easy friendship that gripped me. This was the first time I noticed how character drives a story forward. Here were four people—six possible relationship dyads—and Stegner developed them all.

I wasn’t yet in the grip of creative nonfiction when I first read it, but even then I suspected it was more than a little autobiographical. These people just rang so true. About that: Stegner told VQR magazine in 1991 that he began the book as a memoir.

I was just trying to get some friends of ours down where I could understand them. It turned out to be a novel because I invented a whole lot more than I intended. I was going to do this one right straight from life but I can’t do that. I’m not to be trusted with life; I keep inventing it.

It was more than the little thrill of reading about streets and buildings I know, the larger thrill of seeing the curtain pulled back on what goes on in adult relationships, that held me. It was the technique with which Crossing to Safety was written—the deft moving around in time that Stegner accomplished.

After last August’s MFA Residency, I started thinking about reading Crossing to Safety again, because Mentor Ken McGoogan had just introduced me to the “Rolling Now” literary technique. (See “The End” here on this blog, about that.)

Crossing to Safety comprises 341 pages of “Rolling Now.” After this latest reading, I was so intrigued by Stegner’s polished use of the technique (he leaps back and forth through four decades) that I started analyzing it from the beginning and mapped out exactly where/when he made those leaps. 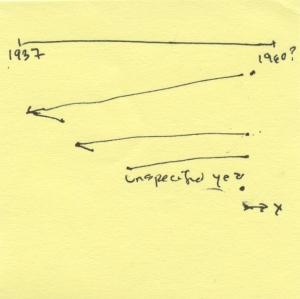 My sticky-note time map of Crossing to Safety.

I finally saw the “why” of it all laid out before me. I saw how each flight back in time layered in details about the two couples whose friendships form the central theme of the book. I saw the skillful quickening of pace as the end approached. I was inspired by the roadmap for how I might approach some future piece of long-form writing. I’m playing with “The Rolling Now” in my writing and diving deeper into braided patterns in my writing studies (alas, now self-guided–farewell, U-King’s Big MFA Adventure!).

I admire what Stegner achieved with Crossing to Safety immensely. I hope someday a book I write can give as much satisfaction to a reader as Stegner has given me.

My blog "True Stories Well Told" is a place for people who read and write about real life. I’ve been leading life writing groups since 2004. I teach, coach memoir writers 1:1, and help people publish and share their life stories.
View all posts by first person productions →
This entry was posted in Book review, writing workshop. Bookmark the permalink.