This is the 17th episode of a travel memoir that is unfolding, one chapter each month, here on True Stories Well Told. Stay tuned for more of the adventure as teenage Suzy’s family moves to Europe, builds a sailboat, and takes up life on the high seas circa 1961. Click here to read the earlier episodes.

Notes taken from Mom’s letter of October 15, 1962 to her sister Margaret.

Put my two little boys in the local school yesterday.  Little one room school–one teacher for 38 boys ranging in age from 5 to 12.  Don’t know how much they will learn, but it’s enlightening for them.  Frankie came home quite horrified with the sanitary facilities–just a hole in a plank! Doesn’t know how he can potty–no toilet paper even.  Probably end up a mixed-up little guy-learning to read and write Spanish before he can read English.  They start them in writing without practice in printing, and their letters are formed enough differently from ours that I don’t know how to help him.  School hours 9 to 12 and 3 to 5. They do seem enthusiastic about it, which is more than I can say for the girls.  Every Monday I take them down to the bus with Jan in tears. If nothing else after six days in the convent, they certainly do appreciate their home and family.  Did I tell you what it costs to send them? $30.00 a month apiece, room, board, tuition, everything.  Cheaper than if they were home.  Course I’m not counting all the hoard of fruit, cookies, candy they stock up on to take back with them.

Carl, too, is going to a local school and finding it a bit of a challenge.  Math, Spanish grammar, French, geography, technical drawing. With all the textbooks in Spanish, he will at least be able to read the stuff before he’s through.  Sue’s boyfriend is one of his teachers.  It’s too bad there can’t be a happy medium between our system of education in the States and the European systems.  No time wasted over here in all the malarkey of social adjustment, etc., they take it for granted that a child is born with brains and should use them.  If only they had just a small portion of the money we spend in the States for education.

Henry appears to be going to end up with correspondence courses from the States.  Tommy has just been classified 1-A, so I don’t know where he will end up.

The tall, ornate ceilings and tile of the Catholic convent boarding school where my sister and I attended school all week seemed to absorb and hold the frigid weather from outside.  The school had no central heating.

My heels were now at the bleeding stage, but I refused to go to the school infirmary.  The two pair of socks under my nylons didn’t keep my feet from freezing.  We weren’t allowed to put anything over our uniforms including socks.  The clunky, ugly, brown saddle shoes rubbed my heels raw, but the nuns wouldn’t let me put on my slippers.

Most of the girls in my class had the fingers of their gloves cut off so they could hold on to their pens and still keep their fingers warm.  My scabbed knuckles hurt from the cold because I didn’t have any gloves or mittens. Mom didn’t realize just how cold we would be at school.  Playing the guitar for my lessons became so painful I wanted to cry, but I remembered Mom’s “Pequeñas cosas” and held my tears.

I imagined the nuns had on more clothes under their habits than they allowed us to wear.  The only warm place was in bed. Once I pretended to be sick just to stay in bed, but the nuns sent for the doctor.  He prescribed some medication that one nun administered.  A suppository, I never complained of the cold again.

When mom told Jan and I that we would have to attend a boarding school for girls on the outskirts of Palma, the capital of Mallorca, it devastated us.  We didn’t want to leave Puerto.  Mom had matriculated my younger brothers in the local school, but Jan and I were too old for that school.  It was a Catholic convent school where the nuns lived and taught classes.  We boarded there all week, but got to go home to Puerto most weekends.  I didn’t realize until then just how cold it could get in Spain.  We missed our friends in Puerto and the warmth of our house. 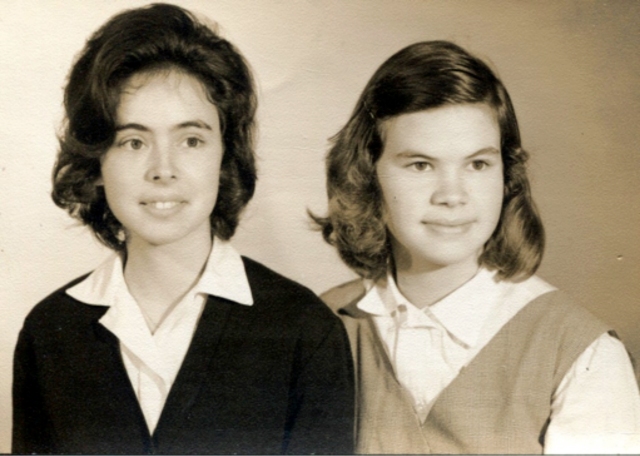 Suzy and Jan in school uniforms

Our Spanish speaking and comprehension was still basic when my sister Jan and I started boarding school.  On our first day at theColegioa nun took us to meet La Madre Superior.  I told her I was embarazadabecause my Spanish was so bad.  A look of shock flashed across her face, then she laughed. The words for embarrassed and pregnant are almost the same in Spanish.

We studied Spanish and French grammar, along with courses in math, art, typing, shorthand, poetry and history.  One of our teachers, we called her “Senorita,” was not a nun. She was a day teacher and came in each morning and left early afternoon.  Two other American girls, who were sisters, and one English girl, also attended the Colegio. The nuns put the five of us in a separate bedroom from the other girls.

There was a French African girl, Simone, from Algeria who attended classes and boarded for several months. It surprised me to learn that all Africans weren’t black.   It was during this time that the Algerians were rising up against the French occupation and Simone’s family sent her to Mallorca for safety.  One day, we found out that her parents had had to leave Algiers overnight.  They left their home, friends and family.  Simone soon joined them in France, but she cried all night, knowing she would never to go back to her home in Africa.  That summer, many of the French Algerians fled to Mallorca for safety.

The Senorita kept asking me questions about President Kennedy.  Would he declare war?  Was the nuclear threat real?  I didn’t understand what she was talking about.  My sister and I became worried that something serious was happening in the US. Senorita was our only link to the outside world, as the nuns didn’t allow televisions or radios at school. We struggled enough with our understanding of Spanish and it was difficult to grasp world events.  When we arrived home for the weekend, we learned about the Cuban missile crisis.  Kennedy had averted a war with Russia and the Spaniards revered him as a hero.    I realized for the first time what it meant to be located geographically between the US and Russia.

After several months the nuns moved us to the regular sleeping room with the other girls and our lives took on the same routine they had.  I think the nuns found out that Susanna, the English girl, had been opening our window at night and conversing with her boyfriend who waited outside below our window.  The nuns wouldn’t tolerate misbehavior, thus our removal from the separate bedroom.

In the mornings we got up and took turns at the sinks in the bathroom.  We washed our faces in ice-cold water, brushed our teeth and combed our hair. Showers were only for special occasions. We had to make arrangements in advance so the nuns could heat the water in the gas water heaters.  This also cost more, so we showered at home on the weekends. Our breakfasts of bread provided by the school, peanut butter and fruit we brought from home, started our days.

Around 10:00AM we had a break from classes for a snack and our paseo outdoors.  The frigid weather cut to the bone, and our teeth chattered as we ran around trying to keep warm while munching our morning snack, which consisted of a thick slice of bread and a chunk of sweet, Spanish chocolate. The afternoon snack was horrible. Another slice of bread, but this came with a thick slice of raw bacon.  Jan and I refused to swallow the fatty bacon and feared throwing it up. “Pequeñas cosas.”

The nuns patrolled the dining room with a stick. Jan and I kept getting our arms slapped because the nuns thought when we put our left hand in our laps, that we were hoarding food in our pockets.  The soups at lunch were the only meals that arrived warm.  Everything seemed colorless and plain.  No spices or aromas to whet our appetites.

At bedtime, we had to undress letting no one see us naked.  This required some antics and the need to be almost double jointed.  First, we put on our nightgown over ALL our clothes.  We then took off our shoes, socks and nylons laying them neatly on the chair by our bed.  The space between our beds was only enough for two chairs, so we had to undress while sitting on our beds.  Next we had to reach behind our back to unbutton our smocks.  Off it came, next the uniform itself, and the blouse followed. Everything had buttons, including our sweater, so nothing had to go over our heads.  By the time we undressed our bodies warmed up to where the cold sheets didn’t bother us.

I hated being away from home all week, missing my friends in Puerto, especially Juan.  I missed the warmth, good food and the relaxing atmosphere where we could speak English all the time.   Pont d’Inca was 60 miles from home.  It seemed like 500.  Most of my friends went to the military school on the base in Puerto, so they didn’t have to board away from Puerto.

Suzy Beal, an occasional contributor to True Stories Well Told, has been writing her life story and personal essays for years. In 2016 Suzy began studying with Sheila Bender at writingitreal.com.  Watch for new chapters of her travel memoir to be posted! Please leave comments for Suzy on this post.

My blog "True Stories Well Told" is a place for people who read and write about real life. I’ve been leading life writing groups since 2004. I teach, coach memoir writers 1:1, and help people publish and share their life stories.
View all posts by first person productions →
This entry was posted in Guest writer and tagged travel. Bookmark the permalink.