Posted on October 20, 2012 by eastsidehistorymadison

Lake Huron. A place I’ve known all my life. Driving there from the suburbs of Detroit took about two hours, but tradition required that we stop in Harvard, Michigan at the A & W. After slurping down our ice cold root beer from frosty mugs, we continued on.

The rest of the trip was along the shoreline. Dad played Suzanne Vega’s album   https://truestorieswelltold.files.wordpress.com/2012/10/04-solitude-standing.m4a. I stared intently out the window watching for glimpses of the blue water through the trees. We listened to Luka and Tom’s Diner. The rhythms of the songs mirrored the crashing waves.

Soon we saw the bright pink house on the right. Bubble gum pink, and a true cottage from the fifties, it was the sign that we had reached our destination.

Turning right onto Sunnyside Drive my dad drove slowly so as not to upset the rocks on the dirt road–therefore upsetting the neighbors. Now we had a full view of the vast blue-green water ahead. As we pulled into the driveway we saw the little wooden sign hanging from the carport. ‘The Lowlers’ it said.

When I was a kid, the cottage was truly a cottage. One story, with only two bedrooms. A small stand-up shower with a single light bulb in the bathroom and a chain hanging down to pull to turn the light on and off. I liked to feel the chain between my fingers and pull it on and off, on and off.

My brother and I would sleep on beds in the screened-in back porch. It smelled funny back there. Like pine sap and old wallpaper. When the windows were open we could hear the waves crashing on the shore just a few houses away.

The cottage is the only place on earth where I would voluntarily rise before 7 A.M. As soon as I woke I would sneak out, oblivious to my messy morning hair, grab my yellow bucket, and while everyone slept I pranced down to the beach. Moving quickly with my bare feet over the rocky road, jumping down the creeky wooden stairs with no handrail into the soft, cold sand.

Early mornings at Lake Huron required a sweatshirt. The stillness and extreme quiet of the empty beach surrounded me as I began hunting for the treasures I came for. Ignoring the icy water on my feet, I quickly bent down, scanning the shoreline and throwing back fossil after fossil. Most of them were imposters and I threw them back impatiently.

Then I would see the distinct contrast of black and gray and white. Like a soccer ball almost. I audibly gasped and quickly pounced on the petoskey stone before allowing it to be washed away as the waves came crashing in again.

Thunk–the first petoskey stone of the day fell into my bucket. The crisp morning breeze blew around me as I made my way down the beach in silence. This solitary event–the joy of my vacation. Down the beach and around the corner–until the rocks became larger. I admired the colors–reds and oranges, olive greens and gray against the blue gray water. 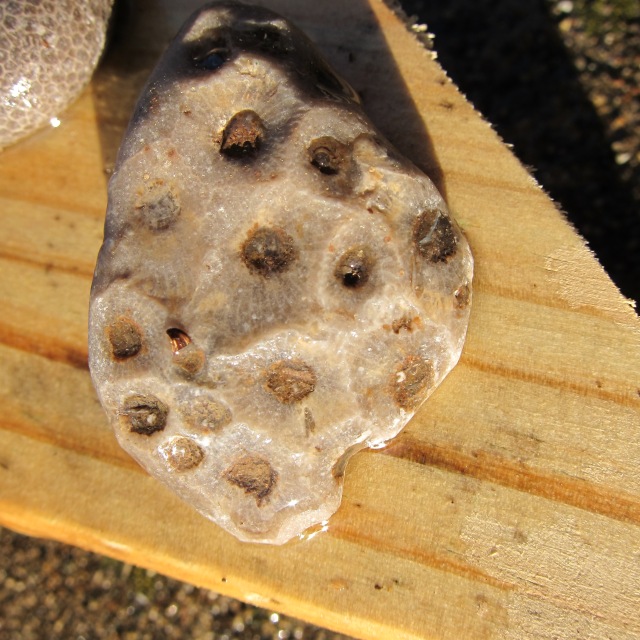 I searched for petosky stones that had become wedged in between the big rocks, getting wet as I climbed over and around them–painfully focused on my task as an eight-year-old. I made my way back around the bend and scoured the beach all the way back to the steps. Satisfied that I had found the day’s bounty and disrupted by the intrusion of others on the beach, I reluctantly made my way up the warming sand, up the rickety steps, and across the rocky road. My yellow bucket was nearly half full as I sprayed the sand off of my feet with the hose. Scratching at the little rocks, the size of sand, that stuck to my toes.

I filled the bucket with water until the petosky stones revealed their glory. Dry, they disguised themselves as ordinary gray stones–similar to the rocks on the gravel road.

I placed the bucket under the tree in the front yard and ran inside for breakfast. My brother was already there sitting on the stool at the counter eating his cereal. “How many did you find today?” He would ask. “More than yesterday,” I would always say. He was six and very impressed with my loot. He would peer into the yellow bucket and longingly touch the stones. He would ask again, “How do you find those? I can never even find one!” I shrugged my shoulders.

Then we would put on our swimsuits and head down to the beach with Mom and Dad for the day. My sun-bleached blonde hair securely braided once more, I would lie on the yellow and red beach blanket and watch my brother look fruitlessly for a petoskey stone. He gave up momentarily and and then we would swim, wading out to our shoulders in the chilly water and then ride the huge waves back to the shore. 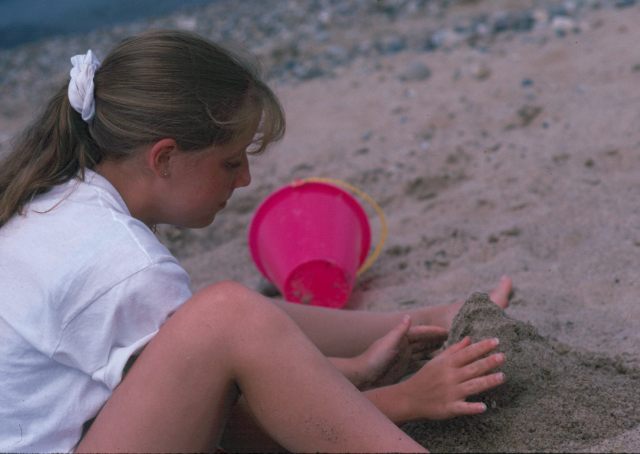 There was a huge black rock that we called our slide. It was slippery enough that if you could climb to the top, the ride down was well worth it. Then we would eat juicy purple grapes from the cooler and read. Our sticky, sandy hands touching the pages of our books and our mom didn’t even care. We built sandcastles, skipped rocks, and hunted for colorful rocks to take home and put in Mom’s garden. 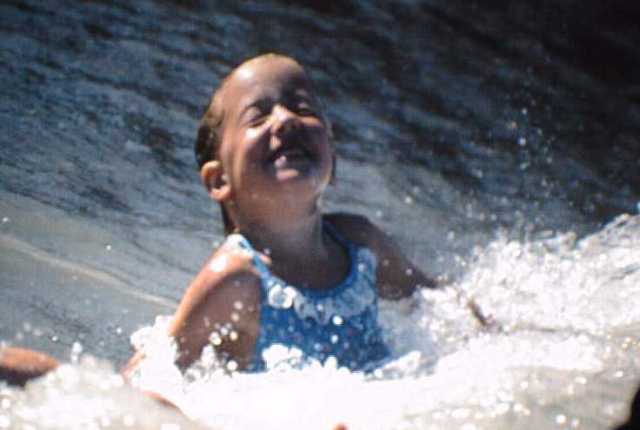 After a full day at the beach we grilled hot dogs and hamburgers for dinner, the smell of the charcoal grill wafting into the kitchen where we were shucking corn on the cob. After dinner we would play cards on the front porch, watching the big ships–freighters–go by on the lake.

If we were lucky we had a bonfire at the beach with smores. The darkness of the nighttime sky was so different from the sky at home. It was so bright. The stars so twinkly and close to us. I would imagine all of the petosky stones washing up onto the shore to be collected in my yellow bucket the next morning.

Every year the same story–the same moments. Even now at age 32 I visit the five-bedroom house with the hot tub formerly known as “the cottage” and find myself drawn to that beach again. Wind blowing in my hair, yellow bucket in my hand, a feeling of who I am washes over me as I bend down in search of treasure.

East Side History Club Organizer
View all posts by eastsidehistorymadison →
This entry was posted in Guest writer. Bookmark the permalink.