Posted on May 6, 2011 by first person productions

Halloween was often a warm night in the Ozarks, with a touch of wind.  When I was older and saw “To Kill a Mockingbird,” the scene when Scout was trying to get home dressed in the pumpkin, I was reminded of our Ozark Halloween:  Wind, rustling leaves, but no real need for a coat.

When I was growing up, you couldn’t buy a Halloween costume, or even a mask.  The only mask you might find was a tiny black mask that covered your upper cheekbones, your nose and your eyebrows.  Well, maybe you could get them at the Five and Dime store, along with a bandana, a cap gun  and a straw cowboy hat. Many a boy donned that outfit and pretended to be the Lone Ranger.   Or, you could make a costume.  All mothers could sew, and every woman had a sewing machine or could stitch by hand.   My first costume, when I was in kindergarten, was of a gypsy.  It was a deep red skirt with small black dots, gathered at the waist, and a bolero style vest, with rick-a-rack on the outer edge.   In first grade I was Peter Pan.  I cannot for the life of me imagine where my mother got the green tights.  She must have had her eye out for them on one of her trips to Kansas City, or maybe she dyed them by hand.  I wore a green tunic, ragged on the bottom edge, with a green string belt.  My hat and shoes were made of felt.  The husband of our housekeeper, Lucille, had whittled a bow and arrow for me.  I was a perfect lost boy. 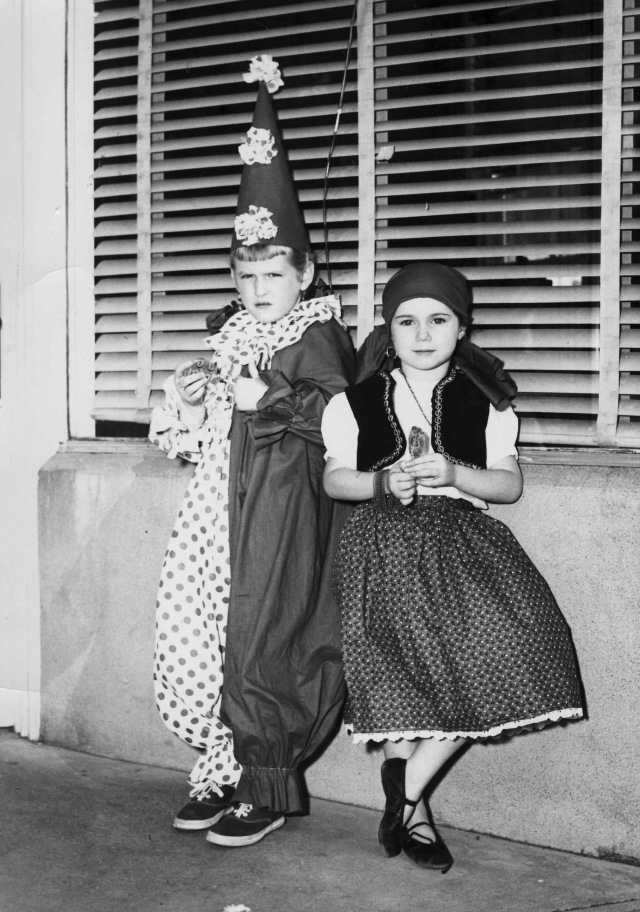 The next year I was the Statue of Liberty.  I think my mother was done with elaborate costumes, and was satisfied to sacrifice one of her white  bed sheets.  Nonetheless, I was content.  I had found a bit of a rare commodity, cardboard, and had fashioned a crown, covered with glitter.  I created a torch out of pipe cleaners (and more glitter).  I tied the bedsheet over one shoulder, and miraculously I became lady liberty herself.

These costumes were for school.  The little ones didn’t actually go out trick or treating.  But by third grade, you were considered old enough to venture out into the unlighted night on your own.  Generally, people went with their siblings or other neighbor children.  Since I was the youngest in my family, and lived in an isolated area, I would find friends who lived in neighborhoods I wanted to canvas.

The treats were amazing.  Fresh caramel apples, and popcorn balls. Divinity. Snickerdoodles, and homemade chocolate rum balls.  Everything was home-made.  Nothing was in a wrapping, except for the butterscotch taffy, pulled that very afternoon.  It was wrapped in waxed paper, twisted at both ends.  This must be where the expression “melt in your mouth” came from.  Warm taffy held in your mouth will last long, delicious moments as the sweetness spreads across your taste buds and down your throat.  Every family had a flat-bottomed basket you would line in waxed paper for the children to take out on Halloween night.  A spot would be delicately chosen for each item.  When the spots were all taken by the night’s winnings, you were done.   And, of course, there were never any tricks, even for the widowed lady who lived by herself, and came reluctantly to the door with our persistent knocking and calling.  She told us she had forgotten it was Halloween, and she had nothing for us.  It pained us to have shamed her like that.

One year, my parents agreed to host a Halloween party at our house.  My sister, Carol,  did most of the planning and served as the hostess to my friends.  We would have a hay maze in the barn’s loft.   My father left most of the hay outside so there’d be enough room to arrange the bales into the walls of the maze.  My sister and I worked like a couple of farm boys stacking those bales.  The first scare of the night was to the first brave soul to peak into the grain bin to see the rats scurry to bury themselves out of sight in the grain.  The honor of telling and retelling that story went  to one of the party goers only.  My sister and I had spent the afternoon peeling grapes, so people could put their hands into a bucket of eyeballs, an experience they could neither confirm nor deny since the hay loft had no light, and the visitor had to creep along in semidarkness until they got their night sight.  Cold spaghetti in oil served a similar purpose.  Having climbed through the first hay hole in the front of the barn, everyone knew there was another in the back of the barn.  Woe to the poor soul who lost her footing, and fell to the earthen floor below.  That really would be scary.

Simplistic, I know, but it was enough.