Zippy and the Couch (books best in pairs)

I participated in a panel discussion on Creative Nonfiction and Memoir at the Wisconsin Regional Writers Association fall conference in Stevens Point last weekend with Judy Bridges (author of Shut Up and Write) and Alan Ansorge (author of the Bay Harbor mystery series). Toward the end of a lively discussion, someone asked what books we’d recommend.

That’s when the books best read in pairs came to mind.

I posted recently about Alexandra Fuller’s books,  Don’t Let’s Go to the Dogs Tonight: An African Childhood and Cocktail Hour Under the Tree of Forgetfulness. (I finished the second book while at the conference–so good I couldn’t put it down.)

Fuller’s two books bear a certain resemblance to Haven Kimmel’s two books in that both pairs start with a book written from a child’s point of view followed by a book that covers the same events and people but with an adult’s insights.

Kimmel’s A Girl Named Zippy: Growing Up Small in Mooreland, Indiana is a rare thing–a childhood memoir minus the awful childhood. So many recent popular memoirs are chronicles of family dysfunction. Zippy’s young world has plenty of quirks–many of them springing from her own 90-degrees-from-reality view. It’s a cheery recollection, well-told.

Then along comes She Got Up Off the Couch and Other Heroic Acts from Mooresville, Indiana. Well! Who suspected that surrounding Zippy in her dreamtime world were parents going through wrenching changes. Like Fuller, Kimmel focuses her second work on her remarkable mother and mental illness’ role in the family dynamic.

In both Kimmel’s and Fuller’s first books parents rule, unquestioned and unjudged.
Where the book pairs differ is in the tenor of the childhood described; Fuller’s is as dark as Kimmel’s is light.

You want to read some books that will make you think about how to write about your life, and steep you in talented writing? Here’s four recommendations for your reading list. 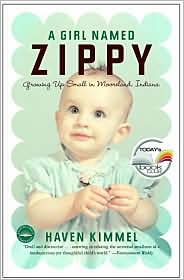 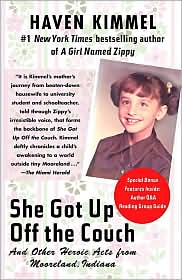