It was 3 AM.  I noticed the light next door.  Earl must hear nature’s call the same time I do, I thought.

It wasn’t unusual for the 89 year old to be up during the night—his light was often on at odd hours, and he told me the pancreatic cancer was getting worse.  Tomorrow’s Sunday, I thought.  I must be sure to check on how he’s doing when I take the paper over.  We shared the cost of the big Sunday newspaper.  It was delivered to my house and I quickly read it; then ran it over to him.  I thought about Earl as I crawled back in bed.

He was a good neighbor.  After his wife died, he was lonely.  He loved to visit over the garden fence, his hoe in his hands, shaking a little with that tremor that appeared as he grew older.  He had lots of stories about the old days in the neighborhood, and how he built his house after coming home from World War II.  Then he would eye my lawn full of dandelions and Creeping Charlie, and say something about being willing to help pay for a lawn service to come spray it a few times like he did.  I’d try to be patient as I’d explain again how I didn’t want to expose my puppy to lawn chemicals, let alone take a chance of them getting in the public water system.  He’d argue a bit but then let it go.

A few years ago he had quite an adventure.  It was Father’s Day, 2006.  It was such a gorgeous sunny day, I had the windows and door to the screened porch open, enjoying the soft summer breeze rustling in the trees.

All of a sudden I heard a loud “CRACK” and louder rustling of leaves.

Sure that a limb of Earl’s big maple tree had broken off, I rushed to the porch to see where it had landed—hoping it wasn’t on my house.

I didn’t see any broken limbs, but shockingly, I saw Earl in his car speeding through the back yards!  Before I could even utter a sound, seconds later he crashed into my backyard neighbor’s garage!  Grabbing my phone, I called 911 for the first time in my life.  Then I rushed along with other neighbors to see Earl.

He seemed unhurt.  He had gotten out of the car and was sitting on the grass, with people around him.  He was explaining what happened.

He was in the car in the garage, buckled up and ready to back out to go to church.  When he looked in the mirror, he saw that “that darned rake” had fallen onto the back of the car.  So he thought he’d just inch forward to loosen it, and then get out to move it.  But something went wrong with the car, and before he knew it he had broken through the back of the garage and down the bank and through the yards and into Marilyn’s garage.  He mused, “There must be something wrong with the accelerator pedal.”  I glanced back at his single-car garage with the car-sized hole in it.  Looking uphill from Marilyn’s yard, the hole looked huge!! Something certainly had gone wrong, but it remained to be seen what that was.

Soon the paramedics came.  After they examined him, they thought he was lucky to have no apparent injuries, thanks primarily to his seat belt.

I smiled at the memory or his explanation that something was wrong with the car, knowing that the mechanics who later checked it out found nothing mechanically wrong at all.  Then I went back to sleep.

When I walked up his steps the next morning, yesterday’s paper was still by the porch door.  That was odd.  Earl always took the daily paper in soon after it came, around 6 AM.  Maybe he had gone to stay with his daughter.

Then I saw yesterday’s mail, still in the mailbox.

I started to worry.  Any time he planned to be away, Earl let me know so I could take in the paper and mail.  That’s why he had given me a key to his house.

No one answered the doorbell.  I decided I’d better call his daughter, just to be on the safe side.

With concern in her voice, Linda said he wasn’t there, and should be inside his home.  Would I mind going in with my key just to see if he’s ok?  With trepidation in my heart, I told her I’d get back to her as soon as I knew something.

Afraid of what I might find, I called Dorothy from across the street to go in with me.

We unlocked the door.

Cautiously, we stepped inside, calling his name.

Heard a feeble voice, “What?”

“It’s Carolyn and Dorothy.  We just came to see if you’re ok.”

“I’m in here,” came the reply, coming from the bathroom.

We peeked through the crack in the door.  There he was, in the tub.

“Do you need help?” we asked, still blocked by the door.

“OK—we’ll get help right away,” we told him.

Dorothy grabbed her cell phone and called Mark, next door to her.  I saw Bill from up the block walking by so I nabbed him to help.  It was all the strong men could do to lift Earl’s dead weight and pull him out of the tub.  They wrapped him in his robe and a towel.

“Did the Badgers win?” he inquired.

Realizing the basketball game he asked about had been played on Friday night, we figured he must have been in that tub since then.  We poured some juice and rummaged around for something to give him to eat.

“M-m-m-m, that tastes good,” he said, chewing on a hastily-made peanut butter sandwich and sipping some orange juice.

Deciding we needed to call 911 so he could be properly checked over, Dorothy did that while I stepped out of the room to call Linda back.

“Oh my word—we’ll be there as soon as we can.  With good traffic, we should be there in 45 minutes.  Thank you so much!”

The paramedics did a quick exam, and then said Earl seemed in remarkably good shape for being without food or water for two days—just a little dehydrated and disoriented.  They told us to make sure he continued to take fluids and small portions of food, and to stay with him until his family arrived.  Just as they were packing up to leave, Linda and her husband got there.

It was only a few days later that we heard the family had arranged for Hospice to help Earl a few hours every day.  Not long after that, he was moved to the Hospice facility where he could have full-time care.

He passed away several months later, on January 15, 2007, but he will always live on in my memory…and especially when I see the bathroom light on next door in “his” house. 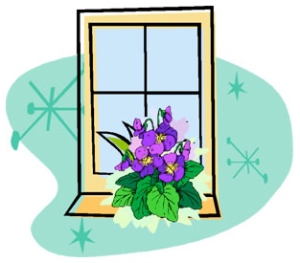