My History of Camping Food

I haven’t published any of my own memoir writing recently–time to get back to that! Here’s an essay I wrote while teaching the “Meals and Memories” workshop for Odyssey three summers ago… but first — “a commercial message.”

My History of Camping Food

I have been camping, first with my family, later with friends, since about 1960. The family trips would go north toward Canada or south into the Indiana hills, depending on the time of year. 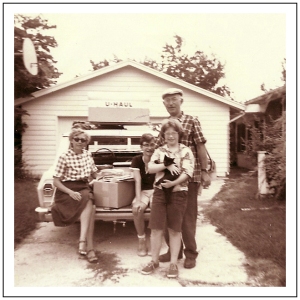 I have few nostalgic memories of my mother’s cooking at home, but I have happy memories of those camping meals.

Even the thought of the camping kitchen pleases me—the picnic table always covered with a vinyl red-checked table cloth, the green Coleman stove at one end, the big Coleman cooler with its pebbled silver finish nearby, also the box of pots and pans and dishware. Even thinking about the latches on those Colemans gives me pleasure, the neat swing and click of a galoshes-style buckle.

We camped a lot. My father believed in systems and made the rest of us believers, so the kitchen set-up took on a systematized ritual, and the parts stood ready to leave at any time. The dry-goods box was filled with cans of Dinty Moore Beef Stew and tuna fish and the beans and tomatoes and tomato sauce that would turn hamburger into chili. If the weather looked right, we could be packed in the car and on the road with an hour’s notice. Mother would grab whatever meat was in the fridge and throw it in the silver Coleman cooler—a few pounds of hamburger or hot dogs or stew beef—and we would stop at a roadside stand for corn, tomatoes, peppers, or green beans.

When we arrived, the food box, dish box, and cooler, plus the Coleman stove, would be placed always in the same position at one end of the picnic table. My mother would start to cook while the rest of us set up the tent. Last of all, the little boat that doubled as car-top storage would come down and be lugged to whatever water was nearby so Father could fish. By supper wherever we were would feel like home.

When we kids emerged from the tent the next morning, cups of cocoa greeted us. Hot chocolate tasted just fine made with powdered milk. Breakfast might be eggs and bacon, or if we were waking up in Canada, pancakes with fresh-picked blueberries. Lunch would be sandwiches of peanut butter and jelly or ham and cheese, sometimes heated up in the Quickie-Pie Makers. These shallow cupped disks latched together with your sandwich inside, corners sheered off and thrown to the dog. You held these in the fire on their long handle until they toasted, then opened the latch and spilled them onto your plate if you were lucky. If not buttered well, they burned and stuck.

That was all the cooking over fire we did; we weren’t a grilling family. For dinner, Mother made various 2-pot meals on the Coleman stove. Most often the meal was Hoosier chili: sear the hamburger; fry the green peppers and onions; throw in the cans of beans, tomatoes, and sauce; then shake the chili spice can over it all, stir, close the lid. Turn your attention to making the elbow macaroni to stir in. That’s what makes it Hoosier chili.

Sometimes we’d experiment with cooking in foil; packets of potatoes and onions that half the time would split and spill into the fire. Often there’d be roastin-ears in foil in that fire too. For dessert, we’d make more Quickie Pies, spooning apple pie filling between slices of bread. Maybe Father would pull a Hershey bar out of his pocket to split among us. Or in Canada, the treasured Cadbury chocolate bars with their smooth slightly nutty flavor. Maybe we’d make Somemores.

If my godmother Ruth were camping with us, we’d eat gourmet concoctions from her Volkswagen camper kitchen—oriental chicken, exotic stews buried in a dutch oven in the fire. She was Chinese and had grown up in a restaurant family. Her road fare ranged more widely than my mother’s simple cooking. She even claimed to have made meals on her engine block.

Family camping petered out about 1973, when my teenage brothers and I became too sullen for family outings to be fun. There is a family photo that has become legendary showing us lined up against the car on our last camping trip, each of the three of us too hip in our own ways—Andy in his surfer-stripe t-shirt, Dave in his long rock-band hair, me in bellbottoms and a huge leather wristband for my watch. My mother says she knew as she snapped that picture—she was never going camping with us again. 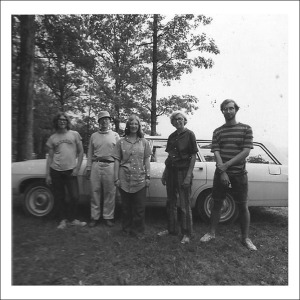 My blog "True Stories Well Told" is a place for people who read and write about real life. I’ve been leading life writing groups since 2004. I teach, coach memoir writers 1:1, and help people publish and share their life stories.
View all posts by first person productions →
This entry was posted in Sarah's memoir, writing workshop. Bookmark the permalink.

1 Response to My History of Camping Food