In the Sarasota airport recently with time to kill, I checked out the “read and return” books. I was pleased to see a memoir among the titles there. But I won’t be “read and returning” Deborah Feldman’s Unorthodox: The Scandalous Rejection of My Hasidic Roots. I’ll be looking for someone to loan it to instead. A gripping read!

Feldman’s coming-of-age memoir is set in the Satmar sect of Hasidic Judaism in Williamsburg, NY–yes, the sect that’s been in the news lately for a rabbi’s abuse of a young girl. The accused has been protected for years by the mores of the strict, traditional, and misogynistic community Feldman writes about.

Feldman tells her story well. She adds her voice to that of many young women in confining situations who take inspiration from the classic literature of girldom–Little Women, Anne of Green Gables, A Tree Grows in Brooklyn–as, like them, she struggles to grow into her own independent, adventurous self.

She opens her story on herself as a child and soon a teen trapped in a dysfunctional arranged marriage. She confronts the conflict between her desire for a modern life–practically inventing feminism for herself (as women will when oppressed)– and her indoctrination as a good Satmar girl.  When she has a child at 19 she realizes that more than just her own future is at stake, and sets about gaining the education and independence she needs to start life over, free of Satmar tyranny, with her son.

Feldman writes well and the constant jeopardy of her situation makes the book hard to put down. Of course pundits turned to her for reaction when the news of Rabbi Weberman’s assaults became public a few weeks ago. On her blog she posted, “Like most people living in the Satmar community, I knew about the abuse of Rabbi Israel Weingarten’s daughter for a long time before he was actually tried in federal court. I followed the case closely and was thrilled when that evil man was convicted and put away.”

When her book debuted in early 2012 the reaction from her community was negative, as could be expected. A blog debunking her story sprang up. Feldman could join the ranks of James Frey, Augusten Burroughs, and others who allowed their fictional impulses to pull them too far outside the circle of recognized truth for the comfort of us readers. The jury is still out on that, and the furor around the rabbi case has brought new voices to the debate.

Regardless, Feldman is at work on a second memoir. And I’m reading  Memoir: a History by Ben Yagoda, which has a good deal to say about this truth-vs-fiction business. Book review to follow. 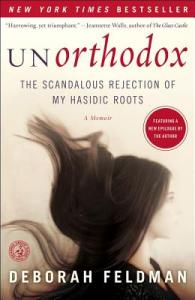