When I was growing up on our Columbia County farm, changes came slowly, if at all. Same landscape, same cycle of seasons, same activities, year after year. Even inside our farmhouse I can visualize the placement of furniture, the exact spot in the pantry where Papa kept the family’s refillable wine bottle, the closet hook where Mama hung her purse—actually everything, always in the same place.

In 1980, sixteen years after Papa died, Mama moved to a nursing home. The farmhouse was unoccupied, but the contents remained in place for at least another fifteen years. During all that time I visited my old homestead often, wandering through the rooms, re-living episodes from my past, some of which now fuel my memoirs. I always entered through the familiar back door, through the shabby lean-to we called the summer kitchen. In spite of its humble construction, the summer kitchen was a well-used room, with its own inventory of artifacts.

Among the most prominent were the guns. Two of them—a .22 rifle standing on its butt behind the door, and Papa’s ancient 12 gauge shotgun, hanging horizontal near the ceiling.

Our farm included woodlands teeming with wildlife, but there were no hunters in our family. Yet the guns were a necessity. There was the occasional varmint digging up the garden or raiding the chicken coop, an animal to be butchered, or even a dog grown old and sick, in need of quick, merciful death. So I remember the guns being there at the ready, although seldom used, from my first childish memory until the house was sold.

We four siblings, far apart in age, were properly taught never to play with them. As a young man my brother Peter perfected his skill with the .22 to the point where he brought home a few plump squirrels one season—but then he was gone, working somewhere. Later, my sister Frances took her turn practicing on tin cans, until she considered herself quite an Annie Oakley.

Another age gap gave the trusty rifle a rest. Edna wasn’t even interested, until she was home on break at the age of twenty, and I, an impetuous 14-year-old, persuaded her to ask the parents to allow the two of us to use the rifle for target practice. (Without Edna’s responsible guidance they would never have consented.) For a while, at least, the tin cans were safe, but as is the way with practice, our aims became more frequently perfect. 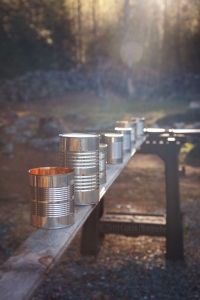 Edna went back to college, but I continued to practice.. I loved bringing my “town friends” out for an overnight or weekend and amazing them with my skill with the rifle. Some of them were terrified; others experienced their own personal thrill of the first time with a firearm. And I never failed to follow the rules.

Not even that memorable day in early spring. I had not ventured out with the rifle since fall. I was a year older and more trustworthy now. I had learned all the rules, and kept them. Could I prove myself? Had I retained the learning of the past season? I took the rifle from its place behind the summer kitchen door, fingered a handful of bullets, and slipped one in the chamber. Then, feeling the exhilaration of the season, I walked around the back side of the house, coming out at the east edge of our front yard. It was quiet, except for the annoying chatter of sparrows in the lilac bush next to the driveway.

Annoying pests. No good for anything! Without thinking, I raised the rifle. The lilac bush was just across the lawn—maybe forty feet—a clear shot. This was better than a tin can. I peered down the barrel, adjusted the sight onto the small, round bird and pulled the trigger.

Crack!! The sound surprised me, but even more startling was the sudden flurry of feathers from the lilac branch where the sparrow had perched. The bird had simply disintegrated—and I had done it! I had killed a living creature. I had pulled the trigger thoughtlessly, not really believing that death could happen. My hands shook on the rifle, and I realized I was trembling all over. Although it was only a sparrow, I had no reason to kill it, and this was a feeling I did not want to experience again. I slunk back around the house and into the summer kitchen, put the unused cartridges in their box , and replaced the rifle on its butt behind the door.

I still indulged in target practice with my friends from time to time, but it was with a newfound sense of responsibility. Although I do not criticize my relatives who teach their young teenagers to shoot deer and turkeys—I’m usually happy enough to share in the eating—my own youthful experience has given me an insight that nags me whenever I hear of a teenager shooting another person, often “accidentally.” What thoughts went through that kid’s mind? Was it similar to sticking out a finger and saying “bang?” It was all pretend. Nothing would happen.

Certainly nothing so final as death.

Joan Zeier is a Madison writer, author of two middle-grade novels, numerous published children’s stories, a member of Society of Children’s Book Writers; also a member of Wisconsin Writers Association where she is a four-time winner of the
prestigious Jade Ring Award.

1 Response to The Sharpshooter