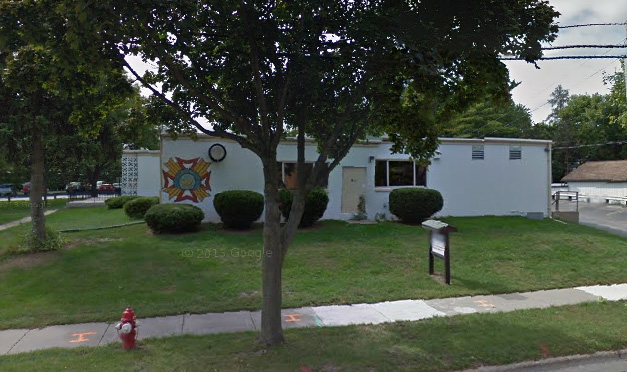 The venue is appropriate. The VFW hall was born in the 1940s, formed into completion in the 1960s, and has been going to seed ever since in a gentle and quite sweet way. It is basic 1940s cinder-block construction with a thorough whitewashing on the outside. The signs show evidence of repainting, and though haggard and tired are legible. They are hardly necessary, as this is a neighborhood bar and on most Friday nights the full house includes no one who has not been in attendance many times before. It’s noisy, but that isn’t a problem, as most of what is said is ignored or immediately forgotten. Though the neighborhood has undergone some gentrification, or at least a spike in the value of housing, the clientele has remained firmly working-class with a tinge of desperation.

Getting to the entrance means running a gauntlet through what some elsewhere might term a “beer garden”. Here it is clearly just a few picnic tables for the utilitarian purpose of allowing people to drink while also obeying the state no-smoking-indoors laws. The breeze is not strong enough to purify and the eyes sting a bit by the time the door is reached. Indoors there has not been smoking for many years, but there remains a sensate reminder that at one time visibility (and breathability) was severely restricted. Or perhaps it is just what clings to us and the other patrons stacked up around the bar.

There are two rooms inside, plus bathrooms and a kitchen. The kitchen is inactive this evening, but retains the perfume of past fish-frys. There is a barroom to the right where the regulars are gathered. The bar itself is Formica, probably redone in the 1960s, as the rest of the décor seems to have appeared about then, from the beer signs to the bowling trophies. Modernity is served by posters revealing the playing schedules of professional sports teams. There seems much less fervor about those teams than can be found around the corner at the “sports bar”.

The second large room is of similar vintage, though void of décor, save several generations of picture of women, presidents of the VFW Auxiliary. The floor is scuffed and faded vinyl tile. The walls are paneled with sheets of plywood from the era when plywood was actually made of solid sheets of wood. A few folding tables are scattered around the room, surrounded by metal chairs. The general scheme is brown on brown, with here and there a tinge of gray or tan. While there is still daylight, the sun on the dusty windows adds a note of cheer.

The bathrooms are the same vintage and color, with stalls tight enough that anyone over 200 pounds will face a struggle. But all the plumbing works, and there are honest-to-goodness paper towels that dispense by pulling.

As bleak as the above description may seem, there is a familiar, homey feeling to the place that makes me comfortable, though I have never been here before. Most of my growing up was spent three blocks away, and on the other side of the earth culturally. I never even went to the Hut, the burger joint the other junior-highers frequented, as my parents felt it was a disreputable training-ground for the neighborhood bars similar to where I now found myself. That cultural and psychological chasm comes into play in the ensuing…

In a previous musing, I debated whether to attend the events scheduled as a celebration of the 50th reunion for the class of 1964 of Madison (WI) Central High School. On the side of going was curiosity, and the possibility of interacting with a few people who had shared some genuine good times. On the no side was fear of feeling the need for acknowledgement that had been crucial to my sense of self. I dreaded that sinking feeling in the pit of my stomach. The battle between moved back and forth for weeks.

My presence in this venue declares my decision – I would attend one of the two functions; the less formal and presumably the less attended “Pub Crawl”. Previous reunions had indeed gone from bar to bar on the Friday night of the reunion weekend. Our advancing age made it more practical to stay the evening in one place. The appropriateness of the setting was due to the matching impressions formed by the attendees. Born in the 1940s, formed into completion in the 1960s, and going to seed ever since, in a gentle and quite sweet way. Among the knee braces, white and non-existent hair, wrinkles and age spots, the mannerisms and voices remained amazingly consistent.

About twenty of my classmates were already present when I arrived, and another thirty of so arrived as the next hour passed. We were issued name-tags on which to identify ourselves – a necessity and two-thirds of us bear no resemblance to what appears in the yearbook. Some of the others – God bless them – could have passed for thirty. I was amazed and gratified by the warmth of greetings, hugs and smiles and genuine “glad to see you”. The positives seemed to have grown, the negatives shrunken. There are a lot of very nice people in my past, for which I’m grateful.

Those long-ago days were lonesome, as if the emotional upheavals of self-doubt and fears were mine alone. In the ensuing years the same loneliness has emerged from time to time. As I encountered one after another of my classmates that evening, I began to realize that we had indeed been much more involved with each others’ lives than I had thought at the time. And in actuality, there were many further from popularity and success than I was. The lens from a fifty-year distance gives a far wider perspective.

The fact that my school was a quarter the size of the other Madison schools meant that I knew most everyone at least by name, and was known as well. It was pleasing to find that as we mixed through a fluid process of conversation in groups of three to five, that I recognized the names, if not all the faces, and could recall shared experiences from those long-ago days.

So, was my ambivalence of whether to attend justified?

No! Nothing such. There were no unfinished agendas. The exchanges of the night were quick and shallow. Marriage, children and jobs covered the range of topics. Yet it seemed understood that all of us had long and deep experiences in life, some mundane, some profound. There was no need to process them, to show off, to pity. I feel a great respect for those stories, content with not knowing the details, celebrating the richness of human variety.

The more formal gathering on Saturday remains a mystery because I didn’t go. If past reunions set the pattern, there would have been about one hundred attending. That would mean that almost twice as many would be absent. Among them would be the valedictorian and salutatorian, the leading athletes and success stories. Also absent would be many whom life had treated harshly. There is a DVD available shot at that event, featuring short interviews with almost everyone there. $34. Another decision.

The strangest part of the experience was that this event was not about the past, but the present. Old issues of life were irrelevant. It was not 1964, but 2014. Glad I went.