The Dawn Wall and the Sunset Wall

We admire athletes who compete at levels we only dream of. At the same time, we consistently overlook the accomplishments of a group facing challenges just as difficult—the elderly.

In January 2015, I was captivated by the exploits of two young men free-climbing the south face of El Capitan in Yosemite National Park, known as the Dawn Wall. After 21 days on the mountain, Tommy Caldwell and Kevin Jorgeson achieved the first successful free ascent of a notoriously difficult climb. A few weeks later, I went to Florida and spent a week with my 92-year-old mother. She had broken a hip since my last visit. Walking is going okay but her balance is iffy. My athletic brother got her a pair of Norwegian walking poles, which she prefers over a cane or walker. They serve her well, even if her Florida neighbors get a lot of mileage out of them. “Going to the Olympics?” I heard them shout companionably when she ambled by, working those poles. 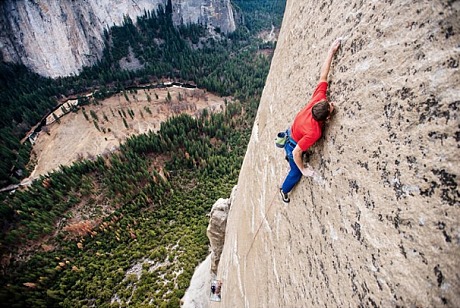 Something about the camper challenge of the free climbers’ adventure appealed to me—sleeping in tents slung from sheer rock, climbing in only the parts of the day when the sun warms the cliff face, spending the rest of the time cooking meals over sterno and sending selfies to supporters in the meadow far below. Each “pitch”—a section between two belay points—had to be mastered. Sometimes one pitch took days. The boys would return to their tents, tape up their wounds, and will them to heal quickly for the next attempt. The athleticism of those young men was impressive. 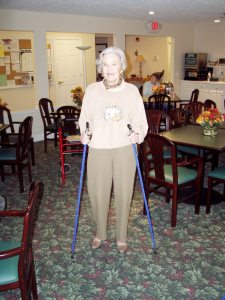 Image from
nordicwalkingusa.wordpress.com (NOT MY MOM)

My mother is facing her own Dawn Wall. Or let’s admit, a Sunset Wall. Cooking a meal, picking something up if it falls to the floor—these are her pitches. Walking the length of Walmart is a supreme challenge. Making it to water aerobics down at the condo pool tires her too much to participate once she gets there. When she rises from a chair, I want to hear an announcer cry, “And… she sticks the landing!”

Aging is not a team sport: Like rock climbing, it is a solo competition. But unlike the boys on the Dawn Wall, the elderly don’t have the option of opting out. There is no possibility of heading back to the meadow floor to try again some other year. They face certain knowledge that however hard it is this year, this month, today, it will be harder the next. One can only focus on achieving a personal best as one goes the distance. Next time you see an old person slowly crossing a busy street, say to yourself, “Dawn Wall—fourteenth pitch.” Hear in your mind what the elderly mutter to each other—“Getting old is not for wimps.” Remember that youthful athleticism may be more appealing to watch, but our elders are the true athletes among us.

Note, I originally published this in 2015. I revised it recently to reflect what I’ve learned about the personal essay form since then.

3 Responses to The Dawn Wall and the Sunset Wall