Given that this post appears during Sexual Assault Awareness Month, it’s a good time to ponder Archie’s advice to Harry regarding sex and love.

Archie Smith and I lugged heavy pails of tar and mops onto the roof of Kemp’s machine shed. The sun was hot and the patches of old tar were soft under my boots. We went about opening the pails and stirring the new black tar. I watched my reflection in the pail disappear into a spiral as I stirred. It looked like I was being sucked into a black hole. Archie threw a cigarette butt to the ground below, “You’re quiet this mornin’son—late hours last night?”

“Not really—got in around midnight.”

It might sound like a contradiction, but Archie was a simple man in a complex way. He was the bumbling but lovable clown who seemed to fall into cartoonish mishaps like the night last fall he had too much to drink down at the VFW and got caught up in Retta’s clothesline in the back yard—couldn’t free himself. He lost his footing in the wet grass and landed his arms tangled in the lines. He fell asleep. Retta came out in the morning and between fits of laughter, freed him. That story made its way to the coffee shop by seven. He took the ribbing from the others like the good sport and gentleman he was—knowing that next time it could easily be one of them.

But a good sport was just a small part of who Archie was. He spoke the low English of the West Virginia mountain folk—the backwoodsmen and coal miners—his people. Some looked askance because of that, but he knew who he was. He was one of those rare people who had what my mom called the gift. He knew things, things about people, about human nature. He stood apart in that way. He had a kind of intelligence I guess you could call it, an intelligence I admired and knew I would never have. I believe it is a gift. I doubt he ever thought about it, because the gift, if you have it, is like breathing or having brown eyes or being left handed—it’s just there. It’s coded in the genes and cannot be learned. One either has the gift or doesn’t. My friends Tanner and Row had the gift too and I could talk to them about some things, but I could talk to Archie about anything.

We sat quiet for a few minutes—stirred our buckets of tar slowly.

“Mind if I ask you somethin’ Archie?”

He grunted, “Go ahead—don’ know much, but you free to ask.”

“How do you know when you’re in love?”

He stopped stirring. “Whoa, that’s a bigun—cain’t say as I ever pondered it—you got some dolly on the line there Harry?”

“I’m sorta leaning toward Liesel Brandt, but I don’t know if it’s real or not.” I continued stirring—wondered if I should have just kept quiet, but it was out there now hanging in the air between us so I had to finish, “—you know how to tell?”

Archie sat on an empty five gallon can, let the stick settle to one side of the thick tar, reached into his pocket and pulled out a cigarette. He rolled it back and forth slowly in his fingers—squinted at it as if it was the first one he’d ever seen. He broke the filter off and flicked it to the ground—lit the cigarette and took a deep drag and when he spoke, the smoke came out of his mouth in spurts so I could see his words, “—met Retta when we was kids—used to play together, her’n her brothers ‘n me. When we was ’bout your age we got curious—if’n you know what I mean. She was a pretty little thing then—had a lot of spark she did—still does I reckon.”

I pictured Retta in my mind, smiled and nodded.

“Love, Harry? I dunno much ’bout love. We fooled around with each other for a while in the beginning.”

Archie took a hard look at me and held it, “—reckon I can count on keepin’ things ‘tween us on this here roof Harry?”

“Well it was like this, after a while I took to touchin’ her in places I probly shouldn’t but she didn’t seem to mind. Times when we were alone she would open her shirt and undo her ponytail so I could run my fingers through her hair—said she liked it. There was a spot in a creek we used to go to—take off our clothes and just sit in the water—next thing I knew she was gettin’ heavy with Row. We was doin’ that on each other, but I don’ think it was love then—least not to my mind. Guess we were just havin’ fun.”

“So you got married?”

“—had to. Her daddy marched her up the holler to see me and mine—said she was in a family way and what was my daddy gonna do ’bout it. Well there it was—nuthin’ to do but hitch up.”

Archie flicked an ash into the tar bucket, “Retta was fourteen and I was ‘most seventeen.”

“So you didn’t know if you loved her or not then?”

“Never thought ’bout love—that come later I reckon. I ‘spect love means different things to different folks. Retta’s a good woman—took care of me and Row real good and I ‘preciated it—least I could do was the same for her and the girl.”

“So you had sex before you knew if you loved her?”

“I think that’s the way it is mostly,” he flicked his cigarette off the roof and pulled his stirring stick out to gauge how the tar dripped back into the pail then stirred again, “Sex is easy son, it’s the lovin’ that’s hard—and they ain’t the same thing—least in the beginnin’ they ain’t.”

I stopped stirring and watched my reflection come back in the pail of tar, “How do you know when a girl wants to, you know, do it?”

“—dunno for sure—seems mostly wimmens hold back, say no at first an’ you cain’t ever force it on ’em—but sometimes they refuse ’cause they think theys supposed to even though theys willin’. I don’t reckon they want a boy to think theys too easy or sumthin’.”

“But how do you know for sure?”

“So no doesn’t always mean no?”

“The first one can be like that, but if’n you push a little and they say no agin then they probly mean it—but at least you know where things are.”

The tar was finally right and Archie went to one end of the roof and I to the other. The gurgle of it splashing onto the roof and the slosh of mops were all that broke the silence.

In the weeks after homecoming, the only thing I wanted was to be with Liesel. Our first fumblings in the moonlight at the limestone quarry whetted my appetite for more of her, and I was more confused each time we were alone together. It was crazy but a part of me said not to care—just take her. But I was so unsure. I wanted to have every inch of her in my hands and mouth. I wanted to smell her hair and neck and breasts and feel the parts of her move against me. I wanted her to open her arms and legs and pull me in to her—feel her skin against mine. I ached for that—I wanted that without having to care. But something in me held back. She wasn’t an apple that when the meat of it is eaten the core is tossed out the window onto the roadside. It was the core of her that I craved too and when I thought about it I realized it was the most important part of her. I couldn’t just toss that out the window and drive on.

I wanted her to want me like I wanted her and I think she did. Our intimacies budded like the jewelweed and that hurt because we both knew how fragile the seed of it was. We couldn’t not care. That would have made it easy but Liesel wasn’t easy in that way and neither was I. Our intimacies and feelings fed off each other like to and fro and without both we might as well be rutting in the muck of a barnyard without thought or feeling. I couldn’t see my way through it.

I wanted to love her and when I realized that, I knew she had the strength to wrap herself around me and make me believe that we could be more—I knew she could draw me out and it scared me because I didn’t know how to do it. But she knew and she knew how and maybe I wouldn’t worry about that and she could make it work for us. It was all right there in her smile—the whole world was right there in her smiling eyes that pulled me in to her like a magnet. She knew me and was ready to give herself over and that had never happened to me—ever. How could I not care? She wasn’t a notch on a bedpost and I didn’t want that and that’s when I knew I loved her. It didn’t come easy. 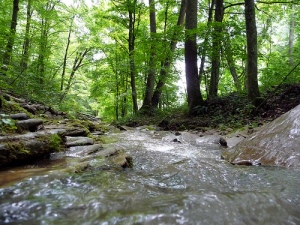 © 2015 Doug Elwell. Doug Elwell writes short stories and memoir that feature characters, lore and culture of the rural Midwest. His work has occasionally appeared in his home town newspaper, The Oakland Independent, two editions of Ignite Your Passion: Kindle Your Inner Spark, True Stories Well Told, Every Writer’s Resource and Midwestern Gothic. He can be contacted via email at: djelwell@mchsi.com.