“I Just Came to Watch”

The “Season of Sports” continues…today, with a story from my own past. – Sarah White

I can feel its grip now, the cord tightly wound around the narrow metal handle. I can feel the spring of its blade as the red rubber button at the tip touches the jacket of my opponent, or more frequently, the plink of pain as my opponent’s blade touches me. The handle and blade are square in cross-section; this is a fencing foil. Women were not allowed to compete in epee or sabre until 1996, and this was only 1972.

It was the fall of my junior year in high school. Because I had broken my ankle badly that spring and spent the summer with a cast from toe to thigh, I needed a rehab activity now that my leg was finally free. Because I had spent the summer on the couch watching the Olympics on TV, it may well have been me who suggested to my friends Sue and Leslie that we find a fencing class. Or maybe it was Sue, who was reading Regency-era bodice-rippers where swashbuckling swordplay figured heavily. Or it may have been Leslie, whose reading leaned more toward fantasy fiction, also rife with swordplay. No matter who instigated it; that fall we three found ourselves enrolled in fencing lessons at the YMCA in Nora, six miles south of where we lived in Carmel, Indiana.

We met in a practice room with mirrored walls and narrow lanes taped out on the polished floor. Our instructor (name forgotten) was a serious man who assumed our interest was serious, and began schooling us in the gentlemanly art of dueling. We were the only teenagers; perhaps six or seven adult men and one or two women attended the lessons as well.

The room echoed with the slap of sneakers on hardwood as the instructor barked his directions in fencing’s creole. (“En garde!” “Allez!” “Lunge, parry, riposte!”) Blade clanged against blade.

As each lesson progressed the air ripened with the odor of sweat. The smell of our unwashed plastrons (borrowed from the instructor’s grab bag) grew worse each week, but we gradually grew better. Before long, Sue, Leslie, and I were investing in equipment of our own. I ordered a foil and padded white jacket—unnervingly similar to a mental patient’s straightjacket with its long tight sleeves and buckled strap passing between the legs—from the official catalog of the United States Fencing Association. I bought a second-hand mask, but balked at wearing the tight white breeches and knee socks that make up fencing’s official uniform. I think all three of us settled on lightweight white pants instead.

As seems to happen with every kind of physical activity that can be instructed or practiced, the fencing lessons were assumed to be readying us for something. It was unlikely we would be called upon to defend ourselves in duels, so the object was understood to be competition. We joined the USFA. One of the adult women (name also forgotten) took competition seriously and frequently drove to fencing meets on weekends. She encouraged us to come along and—even though we were rank beginners—to enter the meets as well. We weren’t certain whether we were fencing in earnest or being ironic, but we did it for something to do. It was kind of her to share her car with three giggling teens.

I was a dreadful fencer. I had no aptitude for sports, no instinct for strategy, and no muscle tone, owing to the six months with my right leg in a cast. My opponents’ many touches against me peppered my right breast and forearm with dark bruises the diameter of dimes. In fencing, the competition is always one against one. I would never have to know the shame of letting down a team. I liked that.

Sue and Leslie and I continued to practice our fencing, not just at the YMCA but at the high school too, where we got permission to start a “fencing club” in lieu of participating in gym. We carried our foils and masks to school, and took over a back hall near the exit where the greasers and freaks gathered to smoke cigarettes or pot. We flirted and carried on, and even occasionally fenced, but never recruited anyone else to our club. 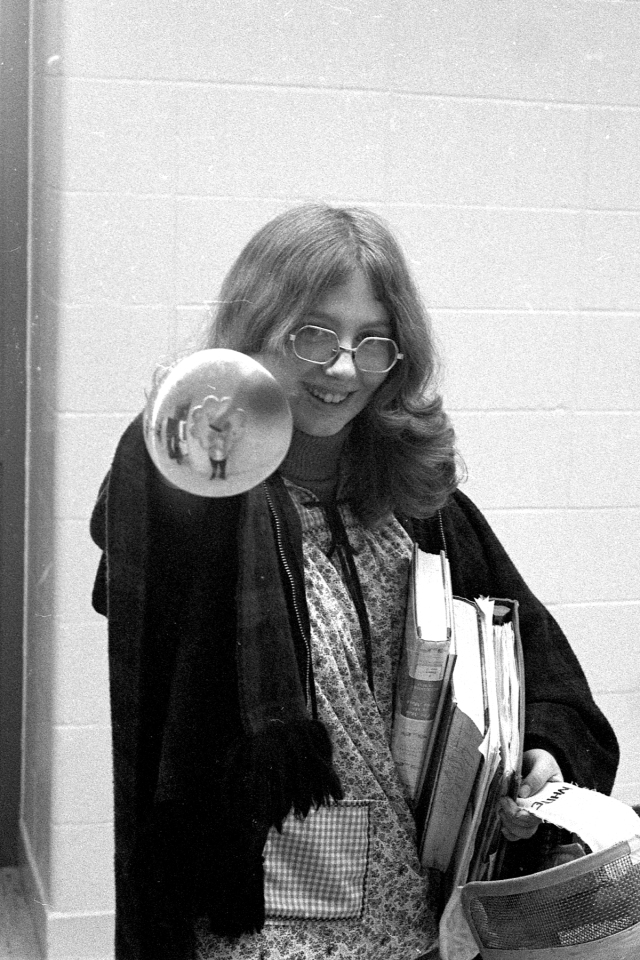 Photo by Dave Fulton, 1973. That’s my foil pointed straight at his camera.

Besides the trips to compete, there was another type of outing connected with our fencing—going out for ice cream at the Dairy Queen after class. There were two boys in our beginner class slightly older than Sue, Leslie, and me, but not yet adults, either. Larry and Marty had ended up in fencing lessons for reasons similar to our own—overindulgence in  “swords and sorcery” science fiction,  and a desire for some kind of fitness activity without the risk of being labeled a jock. Each week they came out to the Y from central Indianapolis, some fifteen miles to the south.

The boys invited us to the DQ, where multilateral flirting ensued. I was at this time in hot pursuit of marijuana. In my high school there was a strict social code prohibiting being the first to induct someone into the brotherhood of pot-smokers, and I had not yet found a sponsor. Finally that barrier fell when Marty made the universal suck-on-a-joint gesture and asked, “So, do you girls get high?” “No!” replied Sue and Leslie, looking startled and a little frightened. “No, but I’d like to,” I said.

At that point my life branched as dramatically as Alice in Wonderland’s when she fell down the rabbit hole. Soon I was spending time with Larry and Marty’s inner city friends who were authentic “hippie freaks.”

My bifurcated world still included weekend trips to fencing meets, but I began bringing along a joint and contemplating sneaking off to smoke it. The time I actually tried this, we were at a meet at Culver Military Academy, a boarding school. The premises were appropriately Napoleonic, with the military uniforms and turreted buildings. Inside the gymnasium, the fencing strips were laid out along narrow mezzanine bridges overlooking tennis courts.

I slipped off to the women’s bathroom to smoke my joint. The beams of light slanting through the high windows were suddenly spangled with jewels. Back on the mezzanine, I found myself mesmerized by the sonic landscape—the slaps and clangs and grunts of fencing merging with the thwonks and thwacks of the ball sports. The foil seemed alien in my hand. The mask felt stifling. The idea of striking a sideways stance and bouncing up and down a narrow lane while attempting not to get stabbed seemed ludicrous. The pot had rendered me distant from it all.

“I just came to watch,” I announced, even though I was dressed and registered to compete. I do not recall anyone’s reaction.

I did continue to compete that spring, but I never again attempted to combine smoking and fencing. The ultimate irony is that I received a very small plaque declaring me eighth in the state in Women’s Fencing in the 1974 season. There were eight registered female fencers in Indiana that year. I liked that.

Essays welcome for the “Season of Sports.” Your writing prompt:

You didn’t play or you did play or you took the middle ground. You were male, or female, or transitioning between one and the other. What was the role of sports in your life as a young person? What has the impact of that been on your life since?

See guidelines for submissions here. Play along and send your sports story for publication on True Stories Well Told?

My blog "True Stories Well Told" is a place for people who read and write about real life. I’ve been leading life writing groups since 2004. I teach, coach memoir writers 1:1, and help people publish and share their life stories.
View all posts by first person productions →
This entry was posted in Sarah's memoir and tagged Carmel, fencing, marijuana, sports. Bookmark the permalink.