Let Your Writer Self Be With You

As I prepare for my “Write in Nature: A Day Away” retreat on January 28th, a line from the closing of Sheila’s essay (below) resonates with me.

Sheila wrote, “I believe that when we are stuck, if we can adopt a rhythmic action, …. the writer in us will separate from our life’s doings and burst into words.” As I told Sheila when she contacted me about cross-posting on each other’s blogs, I find alternating bouts of writing/recalling with bouts of rhythmic physical activity about the most productive way to write. There is just something about balancing mental and physical activity that makes the writing go well. In her essay Sheila offers other ways to get “unstuck” that had never occurred to me. Enjoy! -Sarah White

“Issues of productivity,” “sitting still with loneliness and boredom,” “compartments of time.” I mulled these phrases over.  A close writing colleague was suffering from writer’s block and had written them to me in a letter.   As I thought about what I consider the source of writer’s block, I dialed my cousin.  I often make phone calls while I am thinking about things that I don’t have answers for.

She was busy–“I have twelve cakes in the oven,” she said, “Can you believe it?”  In addition, her two single young adult children were visiting from other cities, and needing to move, she was looking for a new apartment.  Wow, I thought, that’s a lot.

Then I considered my husband, who was busy writing two articles at once for a technical journal.  He had taken me to a movie the evening before because he couldn’t get anywhere in his writing.  Mulling over both my husband’s and my cousin’s projects, I realized something about my own approach to creating.  I had made six kinds of soup from scratch in the last two weeks since I started teaching several days a week because I need to do something while I worry about what I will say to my students. 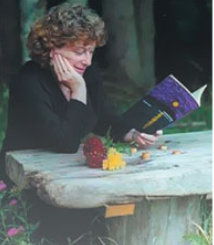 Each of us bakes our creative cakes so differently.  My husband walks away from the cakes, hoping that once he is away from them, they’ll continue to cook somewhere deep inside of him.  Sure enough, after we’d eaten a quick teriyaki meal and drunk a cup of coffee and taken our seats in the theater, the “aha hit.”  Not only did he know what was at the root of his articles’ problems, he realized his new understanding meant he wouldn’t have to start over.  Boy, he enjoyed that movie!  But he would have anyway, even if the “aha” was delayed.  He counts on it arriving sometime.  There’s always HBO waiting at home until the moment strikes.

My cousin–well her cakes are for real–she’s a health food chef and teacher and an allergy free dessert specialist.  She’ll keep right on putting those babies in and out of the oven and publishing her recipes in Vegetarian Times.  Sometimes she makes mistakes that lead to treasured discoveries.  Recently, when she reached for rice cereal instead of flour, she decided to bake the cake using it!  Later, she watched her guests put their first forkfuls into their mouths.  They thought the cake was delicious and she had a new wheat-free dessert.

I group things.  I was teaching so the writing was on the back burner and I got into my domestic chores between classes.  After the quarter, when the courses were done for a stretch, I’d be writing up a storm, the frozen food I’d stored in my freezer decreasing daily.

I am a user of “compartments of time,” but my cousin and my husband use “currents of time” and notice the little surprises that bob up and down in them.

I don’t know, if you are like them or me or someone else, dear reader, but let me propose something for those of you who need to get over writer’s block, severe or mild.  My suggestion comes from reading Who’s Writing This?, edited by Anteaus literary magazine editor Daniel Halpern.  It is a collection of essays by 50 writers and poets on writing and writers block published by The Ecco Press in 1994.  Halpern had entreated contributors to respond to Jorge Luis Borges’ statement, “It is to my other self, to Borges, that things happen.”

Reading this, I began to imagine the writer in me as a separate being from the me who has been going, doing, bitching, wishing to own things and making plans. If Bender is my self to whom things happen, then maybe my writing voice, which is the self to whom things don’t happen, has some nice insight as an observer on what is happening to Bender and whatever it is that distracts her from the writer’s work and voice.

But how does this writer person, the one to whom things have not happened, the one that doesn’t have cakes in the oven, the one who chooses the batter of the written word over and over again, get through to me, the one who owns the computer?

I continued mulling this over for a few days as I taught and did chores.  When my husband again asked me to go see a movie, I said no because I was going to make soup. While I chopped, I found that the rhythm of chopping all those vegetables occupied the Bender to whom things happen and made the writer inside of her, the one to whom things do not happen, think about things.  She was remembering a lot.  She remembered events like the time her mother cut a finger badly just as her dad came home from a week on the road as a traveling salesman and planting a vegetable garden one summer. She remembered her son’s quails laying eggs in a cage just to the side of the garden.  The one to whom things does not happen remembered the way Bender’s husband buys beets of many colors and roasts them in the oven.  She thought of the way Bender’s daughter stuffs artichokes with cloves of garlic and puts lemon juice in the pot of water she boils them in, thereby refining a family delight.  As Bender chopped vegetables, the one to whom things do not happen was chopping the events of Bender’s life into images that delight or concern or make Bender cry.  She thought of the day the quail were eaten by a raccoon and a friend said, “Of course, they were helpless prey, unable to escape the cage.  She thought of how she could use this newly surfaced thought to write about something important to find out about, something about how what nourished Bender’s son with its eggs and beauty was lost because it was captive to a family that didn’t know how to protect it.  She will learn how much sorrow Bender holds knowing this is true for so much besides the quail of long ago.  As the soup simmered, Bender was sitting down and the one to whom things don’t happen was getting words on a page.

I believe that when we are stuck, if we can adopt a rhythmic action like running, shooting baskets, cooking, dancing, swimming, or bicycle riding, the writer in us will separate from our life’s doings and burst into words. If we concentrate on the rhythmic action, the one inside to whom things do not happen, the writing and observing person, will make images surface. If the one who is doing allows the images to register, the one who is doing will sit down and the one who writes will write!

Sheila Bender is dedicated to helping others write from personal experience. Find out more about Sheila’s work at WritingItReal.com.

My blog "True Stories Well Told" is a place for people who read and write about real life. I’ve been leading life writing groups since 2004. I teach, coach memoir writers 1:1, and help people publish and share their life stories.
View all posts by first person productions →
This entry was posted in Guest writer, Writing prompt, writing workshop. Bookmark the permalink.

1 Response to Let Your Writer Self Be With You