Reflecting on writing the “Tuscany” stories

In the last golden light of a lingering warm fall, I conclude my suite of stories about a trip to Tuscany in 1997. Today I reflect on what I learned from writing this second-person experiment. 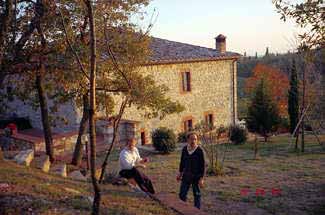 It was just this time of year–early November–that I slid back into my cruddy life after two golden weeks in Italy. The first was spent in Tuscany (the stories presented here), and then we moved on to Sardinia and Sicily, following our friend Scott to visit friends from when he had lived in Italy some years before. I only wrote one story worthy of publishing about that phase of the trip, The Cave of the Witches, and for that story, I let go of  the second-person experiment.

So, when it comes to this second-person voice, WHAT WAS I THINKING?

Here’s what was going on in my life:

During the winter of ’97-’98 I spent a few hours each Saturday morning writing about the Tuscan experience, hoping to produce more stories worthy of publication on that website. As I started, I immediately faced the question: who would care? How could I possibly make anyone care about this one woman and her privileged little trip to Italy with her friends?

I decided my answer would be to make the trip my readers’ trip. By offering “you” the gift of my memory, I could give “you” that escape, that beginning of a healing, that I found in our jaunts into the Italian countryside.

Once started, it was impossible  to back away from that choice. As I found the story growing, I soldiered on in the second person. As a writer, I found it forced me into being more observant, just to get away from using “you” (I) too repetitively. Even though I couldn’t articulate it yet, I was working with the truism of memoir writing: “more eye, less I.”

Would I choose a different voice, knowing what I know now, having gained so much more experience with writing and teaching creative nonfiction? In fact, I think I would. As Kalyanii proved in her novel Om Nayam, there is a time and place for “you.” My original motivation still stands. I want YOU to wake up in the land of cafe latte and good red wines as cheap as two-buck-chuck with only one responsibility: to rebuild your faith that a life outside work exists.

The funny thing is, when I tried to write about the next thing that happened–after we handed back the keys to the villa to the housekeeper and pulled away in our little red Fiat Punto headed for Livorno and the ferry to Sardinia, I fell out of the “you” voice and back into myself with a startling jolt.

Here’s what I wrote that winter–

Waking up, the first thing you are aware of is me. Your reflection, that is, in the shiny underside of the bunk above, in a cabin aboard the “Moby Fantasy” bound for Sardinia. Jim is lying next to you/me in that reflection, very close in the single bed, and with the blanket pulled up to our shoulders we look like a cozy advertisement for ferry accommodations.

It’s disorienting, though, and it snaps me back into myself. it’s no longer you, waking up under Tuscan tiles and beams. It’s me at sea, on the way to attend someone else’s reunions…. the myth of Guido, Hercule, and the Principessa will cease to be told. The triangle will be reassembled into a larger structure.

Thank you for indulging me in revisiting these stories from almost two decades ago. It is exciting for me to realize that in the intervening years, I actually have grown into the person I caught a glimpse of there, slipping between the towers of San Gimignano, flitting among the snow-flecked trees of the Camaldoli, singing along to the notes of the anthemic “Noi Siamo di Noi” in Florence with Gianni the PFM fan…

You too can come alive, invented fresh without sin or history. We all can.

(c) 11/9/2016, Sarah White, written on the morning after the election of Donald Trump to the presidency of the United States.

My blog "True Stories Well Told" is a place for people who read and write about real life. I’ve been leading life writing groups since 2004. I teach, coach memoir writers 1:1, and help people publish and share their life stories.
View all posts by first person productions →
This entry was posted in Sarah's memoir, writing workshop and tagged Tuscany. Bookmark the permalink.

1 Response to Reflecting on writing the “Tuscany” stories