This week my online workshop “Write Your Way to a Better Attitude About Money” concludes. This essay was written in response to a prompt exploring attitudes about money picked up in young adulthood.

In 1979 I committed for the first time to being financially self-sufficient. I was 22 and working a string of temp jobs, recently arrived in Madison, and responsible for not just rent and food but also a car loan payment. It was only $90 a month, but still—my paychecks were hovering around $90 a week.

This was different from the college years when I was nominally self-supporting but able to ask my parents for help when needed, to buy textbooks for example, or to buy a bus ticket home.  They were reasonably supportive of my idea to move to Madison while I was living at home and saving up that winter; “Your Mary Tyler Moore move” my mother called it. I had saved about $600 by March ’79 and felt I had enough to make my escape to Madison.

After a week in the Kings Inn Motel reading apartment ads, I found a single room in a house on Butler Street facing James Madison Park. Here “penny wise but pound foolish” took on new meaning. The room came with the privilege of using a shared a kitchen down two flights of stairs in the basement. In my room was a vintage monitor-top refrigerator. I bought a hot plate, which I thought would be adequate given my lack of interest in cooking. But I quickly began eating in restaurants too much, because preparing my own food in that house was so inconvenient that, combined with my inexperience, I did it as little as possible. I had spent the last two years of college rooming with Colette, an excellent cook, and had thus avoided any practical education in feeding myself. 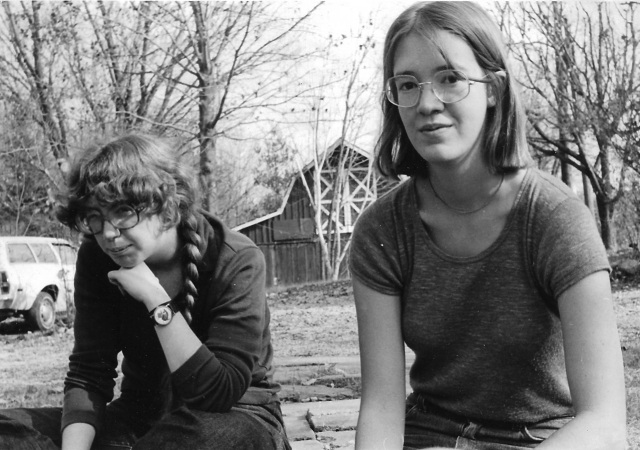 Me with Chef Colette, prior to my Madison move

The Upstairs-Downstairs Deli was just up Gorham Street a few blocks up and over the hill to State Street. That deli became my go-to as long as I had the money. But inevitably between one paycheck and the next I’d be down to coins. Then I’d switch to cooking rice on my hotplate and stirring in an egg, garnishing with a dash of hot sauce. Or I’d fry the egg and some bread. I don’t remember eating ramen noodles but I probably did.

I mostly remember sitting alone at a table at that deli, realizing that my new life was not working out all that well, financially or nutritionally speaking. But putting more effort into cooking for myself never even crossed my mind.

The sub-lease on that room on James Madison Park ended in August. I began reading the apartment ads again. I could have moved into one of the big coops on Langdon Street, where group meals were included in the modest rent, but I wanted to feel a more grown-up than that. I found Holly looking for a roommate a couple of miles east on Mifflin Street, and was impressed that she was a working artist, with a studio in the home.

Holly found me acceptable, and I moved in. Too my delight, I discovered she enjoyed cooking and didn’t mind sharing the bounty if I helped with the food budget and clean-up. Once again I had a roommate who cooked, and my financial and nutritional foundation became a little more secure.

I don’t recall needing that penny-pinching frugal mentality again. It had never been a comfortable fit.

Curious about that “Money Attitudes”  workshop? Here’s the description:

Over five weeks we will meet for discussion and in-class writing exercises. You will have a short weekly writing assignment based on prompting questions. Each week participants will read what you have written for feedback and group discussion. Week by week, we examine– 1. Attitudes we picked up from our families about money, earning power, etc. 2. Past work experiences and what they show us about our attitudes toward money. 3. Current beliefs and attitudes that might be holding us back about money, worth, value, etc. 4. Goals for the future regarding earning, saving, and investing

The workshop has provided valuable insights for me, as well as the other participants. I look forward to offering it online again. Interested? Drop me a line at sarah.white@firstpersonprod.com. I’ll let you know when the next class is scheduled.

My blog "True Stories Well Told" is a place for people who read and write about real life. I’ve been leading life writing groups since 2004. I teach, coach memoir writers 1:1, and help people publish and share their life stories.
View all posts by first person productions →
This entry was posted in Sarah's memoir, Writing prompt. Bookmark the permalink.