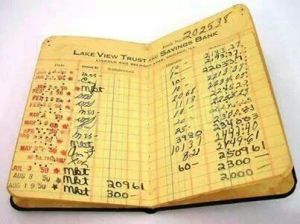 Truman Davis is one of those men who came into my life when I was just a boy and at the time I took him as I found him, a nice man. But over the years since, when he pops into my mind, which he does often, I smile.

If you made a movie about life in a small town and needed a character to play the banker, Truman would have been the obvious choice. He wasn’t the kind of man to stand out in a crowd, but that would have been okay with him. He always wore a smile and spoke a kind word. He was and is a gentle man. If he were to wear a hat, he would have tipped it upon meeting a lady on the sidewalk. He would have smiled broadly, said hello to everyone, even a young boy.

When I was eleven or twelve, I shined shoes at Josh’s barber shop on Saturday mornings for customers waiting for their weekly haircut. It was my first paying job; ten cents for a shine, fifteen for a shine and dye swabbed around soles and heels. Most gave me a tip of a nickel or dime and by noon my pocket bulged with coins. Most Saturdays I walked out with two or three dollars. Father told me to go to the bank and open an account.

I stood out front, debated going in. Huge granite stones, business like, forbidding; I thought no place for an eleven year old. I wasn’t even sure they’d let me in. It was for big business and there I stood fingering a pocketful of nickels and dimes and a few quarters, afraid to go in. But I screwed up my courage and went in and there was Truman Davis behind the iron bars that sat atop the marble counter. I didn’t see a bank dick inside waiting to throw me out. When I got to the teller window, he smiled, asked how he could help me.

Still smiling, he said he’d be glad to help me. He brought out a small blue book from under the counter; thin, about the size of a pack of Lucky Strikes. It had a small clear plastic window in the front cover. I watched as he wrote my name inside so when the book was closed it showed in the window. Then he looked in a big book and copied a number from it and wrote it in my little book. I saw the pages were lined with a grid of faint blue and red lines.

Finished, he asked, “How much do you want to deposit?”

I dug into my pocket and spread my handful of coins on the marble counter. I don’t recall the amount, but it was no more than a couple dollars. With deft hands and fingers used to counting coins he totaled them up and entered the amount in my book next to the date with blue ink in a fountain pen.

“There you go Douglas, now you have a bank account.” He handed me the book and cautioned not to not lose it and bring it with me when I wanted to make a deposit or withdrawal.

Deposits and withdrawals. Me, a little kid, making deposits and withdrawals in the Pinhook National Bank with a wrought iron fence atop a real marble counter that was higher than my chest. Right then my little blue bank book meant everything to me. Even more to me than my new Captain Video ring that whistled silent signals to Captain Video that I got free for sending in a box top from something or other. With the exception of only a few entries by Mr. Pierson, Truman was always my personal banker. I used that little blue book until I left home for college and when I did leave I took with me the memory of a warm, friendly man who treated a little kid with a pocket full of dimes and nickels no differently than the richest man in town and now that is worth more to me than all the bank books in the world.

Often we don’t know the effect we have on others in our lives. Truman Davis’ kindness to me when I was a boy is something I hold as one of my most prized memories because, being only a kid, he treated me with respect, the same way he treated everyone, even the richest man in town.

Since this ode to Mr. Davis was written, he has passed. But not his legacy. Almost without fail to this day when I either receive money or disburse it, I think of Truman Davis. He taught me at a young age the value of saving and thankfully the lesson was learned. I have had some very slim paydays off and on over the years, but there has never been even one when I didn’t set a few dollars aside for a rainy day, sometimes no more than two or three. He told me to pay myself first then whoever else I might owe. ‘After all, Doug, you worked for the money so take your cut off the top then pay everyone else.’

Doug Elwell grew up on the prairie of rural east central Illinois. His stories feature the characters, lore, and culture of that region. He explores the depth and richness of the inner lives of its people and communities. He is an occasional contributor to The Australia Times. His work has also appeared in The Oakland Independent, Ignite Your Passion: Kindle Your Inner Spark, True Stories Well Told, Every Writer’s Resource, Writers Grapevine, Ruminate and Midwestern Gothic literary journal. He has a Kindle novel, Charlie, available from the War Writer’s Campaign at www.warwriterscampaign.org. Proceeds from purchases go directly to the campaign, a non-profit that helps re-integrate veterans into society following their deployments. Doug can be contacted via email at: djelwell@mchsi.com.

3 Responses to The Bank Book