In this season of giving thanks, I offer this short essay I wrote nearly a decade ago about a gift that kept on giving. I often use this as a teaching story in my workshops, asking “with whom do you sympathize? From whose point of view do you see this story?”

In 1978 I graduated from college. As a reward, my parents offered to help me buy a car. In fact, they had a suitable car already picked out for me—a Ford Pinto station wagon with low miles, waiting at a dealership north of Indianapolis. They would pay the down payment and I would handle the monthly payments of $90 until the car was paid off—a matter of some two years, to cover its $2400 purchase price plus interest. 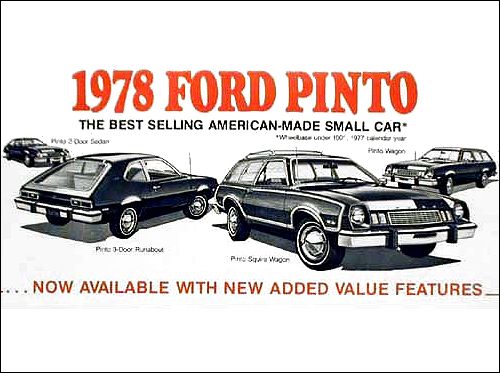 We went to look at it—and I recoiled in horror. Low-slung and ovoid, it looked like a Bic lighter on wheels. From the moment I first saw it, I had visions of myself trying to maneuver bags of groceries and a toddler into and out of its cramped back seat. Becoming a suburban mom with toddlers and groceries was not in my plan. Rather, I intended to move to Madison, Wisconsin, a destination I had picked for its reputation as a hip college town. That car and I were pulling in two different directions. The price was right and I accepted it, but I never learned to like it even a little bit. Approaching it in a parking lot, I would see that spirit of a suburban mom, hear the ghost-whine of her toddler, feel her spectral exasperation with that vile car.

After a short time in Madison, I realized I would need more training to compete for the jobs I wanted. I enrolled in a local technical school’s commercial art program and took a part time job. I told my parents I intended to sell the Pinto—I couldn’t afford the payments while in school. They encouraged me to return the car to them rather than sell. They offered me $600 for it, and I agreed. I drove it back to Indianapolis and returned to Madison on the Greyhound bus.

Two years later I finished my commercial art course, got a job I loved at the Isthmus newspaper, and met the man for me. We announced our plans to marry.

“That’s wonderful,” my mother exclaimed. “For your present, we’ll give you either a wedding, or a car. Which would you like?”

“A car!” I replied. I had no interest in a fancy wedding, and I had just spent two years riding the bus.

In June of 1983 Jim and I were married by a Justice of the Peace, and celebrated with a reception in Orton Park. My parents arrived from Indianapolis in two cars—one driving their blue Chevy and the other my new car—that damn Pinto wagon!

I would never have agreed to the “wedding car” if I had known that was their plan. But what could I say? “Thank you” would have to do.

As I mentioned at the beginning, I ask, “with whom do you sympathize? From whose point of view do you see this story?” Some people see me as a most ungrateful girl. Others say my parents just didn’t “get” me. It’s a reminder that however you see your story, others–including those in it–will see it through the lens of their own values and life experience.

This story comes to mind because my mother is planning to move to a senior community in Madison soon. She says, “I’ll buy you a new car.” (She doesn’t find my Jetta comfortable or easy to get in and out of.) “That way I can make you take me places.” ) I wonder what new parental car story I will be gifted with….

My blog "True Stories Well Told" is a place for people who read and write about real life. I’ve been leading life writing groups since 2004. I teach, coach memoir writers 1:1, and help people publish and share their life stories.
View all posts by first person productions →
This entry was posted in Sarah's memoir, writing workshop. Bookmark the permalink.

1 Response to The Pinto