Posted on May 16, 2018 by first person productions

You talk about your dirty tricks.  I was stumbling into my dorm late one Saturday night when I felt a tap on my shoulder and saw a finger beckoning me over.

“Past curfew, aren’t you?” asked a cheerful male voice, although it didn’t really strike me as a question. I looked up and recognized Mr. Bell, one of the Drama teachers, standing just inside the door.

“Maybe a little,” I said carefully, trying to sound as though I hadn’t recently imbibed several beers. “Is that a problem?”

This was no idle question. I had just enrolled in my fourth college, the result of a number of flunk-outs and other episodes of non-exemplary behavior in previous halls of learning.  I knew I had few academic options left and couldn’t afford to blow this one. I waited.

“I won’t report you if you agree to audition for our Spring Play.”

Oh, God! This situation was getting worse by the minute. The Spring Play was the Drama Department ‘s talent showcase, and I had absolutely no desire to be involved. The only acting I’d ever done was trying to talk my way out of trouble.

“But I’m not a drama major, and I haven’t ever been in a play,” I objected.

“Your choice.  I need actors, and you need to not get reported. What do you say?”

I really had no choice. And my head was starting to hurt.

I walked slightly unsteadily up two flights of stairs to my room, relieved that I had dodged a disciplinary bullet.  And since I couldn’t act, Mr. B wouldn’t want me in his play. I would keep my promise, be rejected, my debt would be paid, and I would be off scot-free. I fell into a relieved sleep.

Sunday morning found me at Mass (required), clinging to the pew ahead, suffering from a throbbing hangover –turned-migraine, and consumed by anxious, definitely non-pious thoughts.  What if I embarrassed myself in front of Drama people?  What if he turned me in when I failed my tryout? Worse yet, what if he made me be in the play anyway, just to punish me?  I decided to skip breakfast.  I wasn’t well.  I had been played, so to speak. I blamed myself.

Promptly at 6:30 Monday night I presented myself to the Drama department try-out judges.  The play I was hoping to avoid was nothing I had ever even heard of, a Theater of the Absurd work, The Bald Soprano by Eugene Ionesco. Well, the absurd part was already evident.  All the other students waiting to try out were obviously drama majors with acting experience. Not me.  Except for dressing up as George Washington for the Girl Scout parade, I was experience-free. 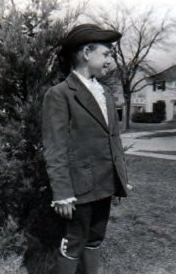 Me in my George Washington attire.

The panel of judges assigned me to audition for the part of Mrs. Martin, the wife of Mr. Martin who, I was told, headed up an unusual British family. Someone handed me a script with my lines highlighted in yellow. There certainly seemed to be a lot of them. Voice-quaveringly nervous, I tried hamming it up to emphasize my lack of talent, but to my horror, the judges were amused by my performance and chose me to play Mrs. Martin. It was then I realized the extent of my punishment.  Mrs. Martin was the lead role.

Deanna, the senior Drama major who always auditioned for the lead, and usually got it, shot me a venomous look as she received the supporting role of housekeeper. Was it my fault that I had discovered my inner cockney, and used that accent to read my lines?  I thought it would be cringe-worthy, but unfortunately, Mr. Bell thought I was hilarious. It was Theater of the Absurd, after all, and he let me know that his expectations were high. I would be at every practice, would learn my lines quickly, appear for costume fittings and help backstage.  In other words, I would have no life but theater for the next month.

I had hoped to perform my punishment without mentioning it to my family, but in a most unfortunate coincidence, the head of the Drama Department was friends with a second cousin of my father.  Cousin Kenny often volunteered as an extra in their larger productions, and when he figured out who I was, couldn’t wait to spread the good news to my parents. At least he didn’t know the real reason I was appearing in a play, but now I was being squeezed from two sides.

Mom had loved being involved in college theater, and Dad, a high school English teacher, had moonlighted as a director for their plays. They were thrilled to think that one of their children had inherited the performance gene, and promptly made plans for the trip up to see me perform.

As rehearsals progressed, I began to realize that I was actually quite competent in my role and that Deanna, the Drama Department Diva, who had wanted my part, was jealous and resentful.  She began to criticize my performances, copy my accent, and attempt to upstage me. More than anything, I didn’t want trouble, but she seemed determined to start something.  I resisted as long as I could, until one evening shortly before dress rehearsal was about to begin, she walked up to me and snapped her fingers.

“I don’t smoke”, I replied, which was not true and she knew it. She pulled out her own cigarette and waved it at me.

“Light!” she snapped.  My chain had been jerked for the last time. I took out my pack of matches, lit one and dropped it on the floor.

“There you go,” I said, ground it out, and walked away. After that, she left me alone.

The evening of the play, the cast arrived early, wriggled into our costumes, put on our makeup and received final instructions from Mr. Bell who wished us all broken legs. My parents took their seats in the packed auditorium, the lights dimmed and the curtain went up. It was show time.  Everyone did a great job and Deanna was totally professional.  I forgot one line, but adrenaline kicked in and I made something up on the spot so no one noticed the tiny glitch.  We received a standing ovation, and I got a wonderfully complimentary review in the Campus newspaper.

After my triumphant debut, I could tell that my long-suffering parents believed I had finally found myself. That silly talk of a Psychology major could be discounted, and in fact, always had been by Mom, who was suspicious of therapy as just an excuse to complain about your Mother. Drama, on the other hand, could be a great career!

Man, I wished Cousin Kenny had kept his mouth shut. I didn’t want to disappoint Mom and Dad, but the whole thespian experience had just seemed like a chore to me. Once again, I was a weathervane in the wind when it came to choosing a life path.

Lacking any serious goal, I decided I could at least temper parental disappointment by switching from the contentious Psychology major to Elementary Education. My parents, sister and older brother were already teachers; we could be a teaching dynasty. Besides, they would soon discover they did have a dramatic child. It was my younger brother Thomas, King of the Renaissance Fairs.

Faith describes herself as a serial under-achiever, now retired after many years as a hospital scheduling specialist.  When her plan to cultivate a gardening hobby resulted only in hives, she decided to get real and explore her long-time interest in creative writing. She’s so happy she did. Faith and her husband live in Madison, WI with Ivy, their beloved old Belgian Tervuren. They have two grown sons, (also beloved), and a wonderful daughter-in-law.