April, 2019. I am having very similar feelings to when I brought my baby home, feelings which eventually developed into full blown postpartum depression that landed me in the locked ward for four days.  But this time it is not a new baby but an adopted dog!  This is definitely on a smaller scale than the postpartum incident and I am fully medicated (which I wasn’t postpartum), so I expect a speedier return to normalcy. But I am shocked by the similarity and depth of these post-dog-adoption feelings. 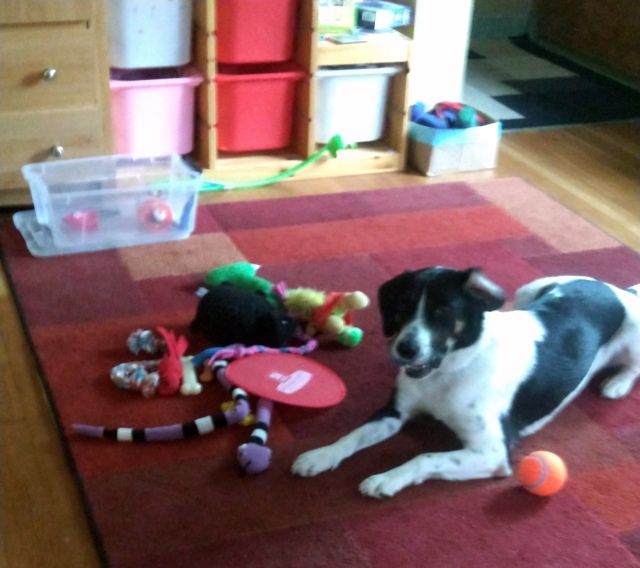 The dog is Domino.  A two-year-old hound mix we adopted from the Humane Society.  We don’t know much about him except he came from Mississippi and was surrendered with another dog to a Mississippi shelter because his owner had a terminal illness.

We picked him because he is not a puppy and seemed calm and gentle.  When he looks up at you, it seems he is smiling.  He came to us named Baylor but my daughter renamed him Domino because he is primarily black and white. We had plans to adopt a dog this spring, mostly to give my daughter a companion and something to do.

Domino loves Sonia but he really loves me and seems to only feel comfortable when he is very close to me. Right now we are sitting on the couch and his nose is touching my leg.  The look in his eyes when he looks at me is hard to define but I guess the closest thing I have experienced is the way a baby looks at her mother.  It is satisfying but it is also scary.  I can feel his emotional world reaching out for me when he looks at me and I can’t help but be drawn in. 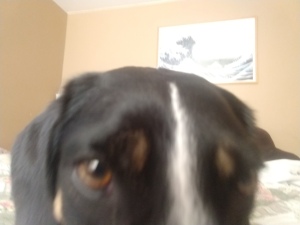 The first night we had him he slept on the floor next to me.  He snores and tosses and breathes erratically just like a newborn.  I wasn’t lying awake all night listening to him, as I did when we first brought Sonia home, but I was intensely aware of his presence.  I couldn’t help but think about those I guess touching but in some ways creepy things they tell you about sleeping in the same room as your newborn. Newborns sleep much better when physically close to their mothers.  The mother’s heartbeat and the infant’s synchronize, their breath aligns.  There is some kind of pheromone exchange.  This is great for the newborn but not so great for the mother if she is feeling anxious and trapped in the new reality of motherhood.  I worried this was happening with this dog.  Was there some kind of disturbing alignment going on between us?  I should have made him bed down in Sonia’s room so they could exchange pheromones or whatever, but he rightly picked me as his mother.

Sonia isn’t capable of mothering anyone yet.  She loves the dog and has done more walking, willingly, than she has ever done in her life since we got him. But she is still devoted to her core activities which are looking at YouTube on my phone, playing video games, and playing with her stuffed animals.

For me, the dog has changed everything and completely upended my routine.  This upending is mostly mental.  My physical routine hasn’t changed that much.  I have always kept erratic work hours and gone on long walks.  One reason we decided we could handle a dog is that I am hardly ever away from home for more than five hours.  I work part time and I always have to be home when Sonia gets off the school bus.  We have organized our family life like this since Sonia started school, but I feel the same anxiety and mental tether to home that I felt when Sonia was a newborn. It is like I am never off the clock. The timer is ticking once I leave the house and I must get back as soon as I can to tend to the physical and emotional needs of my dependent.

When I first had Sonia, I could not adjust to this mental tethering to another being.  I was crushed by anxiety and then depression that this was my permanent condition (parenthood).  I would never have that “free” feeling again like when the semester is over or you quit your waitressing job.  Something will always be “hanging over you” and that something wasn’t a term paper or a double shift but the entire future and well-being of another living creature.  Slowly, with the help of drugs and time and Sonia’s growing out of the infant stage, I learned to live with it.  I still get flashes of that crushing, trapped feeling when Sonia needs me urgently again (like up all night vomiting) but I don’t panic anymore and I can see the larger picture.

I am sure I will come to terms with my dog parenthood eventually too.  Things will normalize with time.  I hope.  Domino had separation anxiety issues.  He is not content to be left alone in the house for any length of time.  He is on drugs for this!  He is on the same kind of drugs I am!  He has his first day of doggy daycare later this week.  I hoping the distraction of the other people and dogs will occupy him when I sneak out the door.  That didn’t work when I took Sonia to preschool at age three.  She wailed inconsolably for at least an hour after I left for the first time but Sonia is my baby.  Domino is just my dog!

Also by Katie Ravich: The Underpants, Surviving the Kalahari, Raising Sonia, Spirit of the Cimarron, and Fudge Girl