I think I’ve known about The Moth since it originated in New York City in 1997. A homesick southern poet wanted to recreate the feeling of the summer evenings he remembered, when people gathered on porches to tell stories, drawn to the flame of human spirit like moths to a porch-light. I read occasional news reports about its spread from New York to other cities, its increasingly professional productions. The Moth came to Madison in January 2016. So why did it take me until January 2020 to get myself over to a Moth StorySLAMto experience it for myself?

Moth emcee–the view from my seat

Well, no doubt a little fear was involved—fear that it would be too wonderful, that I would feel I didn’t belong. Maybe it was that old competitive bugaboo kicking in, fear that a local Moth would steal wind from the sails of my own storytelling monthly event. Well, I’m a big girl now, with a big MFA to my name, and I’m confident enough to get on over to a Moth and find out how it feels to sit in the dark listening to 5-minute, first-person, true stories performed from a stage.

Each Moth evening starts with an open-ended theme. January’s was “Adventure.” I arrived at the High Noon Saloon about a half hour before show-time and sat down next to a couple of friendly Gen-X women. Doors open at 6:30 for the 7:30 show, and my friendly informants—Moth regulars—told me that if you hope for one of the ten slots on the performer list, you’d better arrive at 6:30. They also let me in on the secret that some of the performers to take the stage that night were likely hand-picked—repeaters guaranteed to deliver good entertainment.

First up was Dave Nelson, who walked up to the mic and announced: “I was an 8-year-old pornographer.” He delivered with a comic’s timing his tale about stealing Playboy magazines and selling pages for a dollar a piece. When the applause settled down, the emcee drew a name from a bag, then improvised few time-fillers from prompt-slips handed in by audience members while the next storyteller made his way to the stage. Meanwhile three pairs of judges assigned a score to Nelson’s performance: 9.4. I was surprised to learn Moth events were competitive.

Slips with prompts were handed out at the door.

Four more storytellers followed before an intermission. The emcee ad-libbed between each. Victor Vileña gave an unpolished but impassioned description of his attempts to illegally cross the Mexico-America border as a 16-year-old. Judges awarded him an 8.1. Ann Bosananas described her adventures as a 4-year-old in a trailer park in Duluth, dunning neighbors for cookies. Score: 8.0. Erica Solis took us with her on a road trip to Georgia with two college friends. High on energy drinks and all-night driving, they turned the stereotype of a dangerous hitchhiker on its head. He nearly bought a car just to get away from them. Score: 8.6.

Alexander Latham closed the set with another college road-trip story. This one brought ten unwashed young men to the doorstep of Latham’s ex-girlfriend’s family in Denver—while the ex was in Amsterdam. The family’s wealth and hospitality dwarfed the glories of Zion National Park and became the legend of that trip. Score: 9.4, a tie with Nelson, and clearly, another experienced performer. (I hope I’ve transcribed the names I heard correctly.)

Intermission hit then, as did 8:30pm, and I left for home, feeling pensive.

In this context, what set the polished performers apart from the amateurs? Most obvious was a combination of phrasing, gestures, and lack of filler words. The Moth format requires that people perform their stories—no reading aloud. The Moth website offers tips for telling a story well. There is some helpful advice for memoir writers there: “Paint a scene. Clearly state your fears, desires, the dilemma. Introduce the conflict. Make us worried for you. Impress us with observations that are uniquely yours. Rope us into the moment when it all goes down. Conclude as a different person: Triumphant? Defeated? Befuddled? Enlightened? … CHANGED.” I’ve taught 6-week workshops that covered no more than those points. 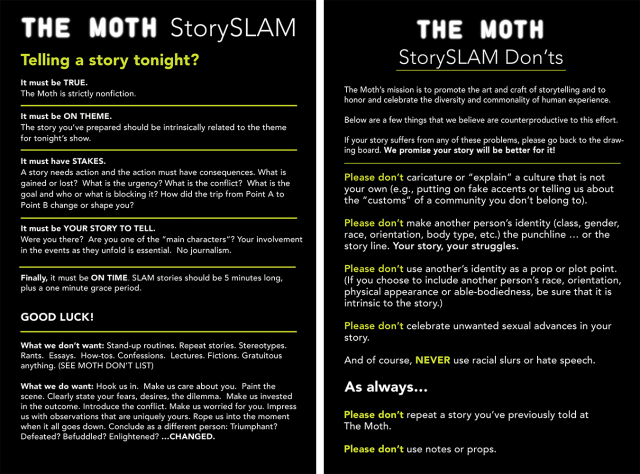 For six years I’ve hosted First Monday, First Person at a local library, billing it as a “salon” for memoir writers who want to share and critique writing in the first person with likeminded people. We’re unlike The Moth in several key ways: Tickets to the local Moth are $15; FMFP is free. They’re performing from memory; we’re reading our work (mostly first drafts) from pages or mobile devices. We’re in a well-lit library meeting room at a podium facing a dozen or so regulars and newbies in a horseshoe, not in a dark bar at a mic on a stage facing an anonymous audience beyond the spotlights. We offer encouragement and suggestions, but no numerical scores—we’re the antithesis of competitive.

There’s something about the Moth that makes me itchy and I can’t put my finger on what. I worry about how quickly the line is crossed from making our own fun to becoming passive consumers of content. The Moth started out homegrown fun, but now it’s not. Still fun, but not “just us.”  If indeed those super-talented performers who opened and closed the set were secretly invited, then they were competing under false pretenses and the rest of us were taken in. I feel a little bit duped. But I definitely want to go back to The Moth in Madison.

February’s theme is “Love Hurts.” Want to join me there on February 10? I might even try to sign up to tell a story of my own.

p.s. For an update from the local producers of The Moth. read the comments below.

My blog "True Stories Well Told" is a place for people who read and write about real life. I’ve been leading life writing groups since 2004. I teach, coach memoir writers 1:1, and help people publish and share their life stories.
View all posts by first person productions →
This entry was posted in Call for action, Sarah's memoir. Bookmark the permalink.

7 Responses to My First Moth StorySLAM