This post continues a series on “objects” inspired by Martie McNabb’s Show & Tales events. In writing, the concrete will always have more power than the abstract, because with concrete words come images. Let Faith’s words bring images to your mind… and consider this an invitation to write your own “object lessons”–stories inspired by and focused on the things that have meaning for us, because we know their story.

What on earth was the matter with me, I wondered, as I stood shivering on the sidewalk in front of the Technical College, in a too-light jacket, waiting for my friend to arrive. I should have been home watching “The Waltons” as I did every Thursday evening, not preparing to begin a course in “Intermediate Knit Dress.”  What hadI been thinking?  Just the term “intermediate” which suggested some proficiency, should have given me pause. To date, my total sewing experience consisted of hemming two large red cloth rectangles into what passed for curtains in our first apartment. They beat hanging a sheet in the window, but barely.

Oh, if only my husband hadn’t been working nights, and I wasn’t pregnant and anxious, I would never have agreed to this class. But Nancy had caught me in a vulnerable moment, so too late now. John-Boy and Mary Ellen were just going to have to deal with life on their own for eight weeks while I attempted to attain a domestic art, of which my marriage resumé was currently devoid.

Genetically, I should have been predisposed to sewing competence.  My mother was an excellent seamstress.  I remember her making dresses for my sister and me and little sport coats for my brothers, even doll clothes for beloved vinyl babies. Mom took great satisfaction from her creativity.  I considered my sister a sewing savant.  She’d find a yard or two of material, eyeball it, and create a skirt or shorts without even using a pattern. My two recently acquired sisters-in-law could zip up a set of ruffled curtains or cushion cover seemingly without effort or angst.  I simply hadn’t inherited the arts and craft gene.  Yes, I had agreed with Nancy that a course in “Intermediate knit dress” could be just the springboard we needed to catapult ourselves into the realm of fashion design, but in reality, this sewing class rated very low on my interest scale and somewhere between daunting and minefield in terms of potential for success. 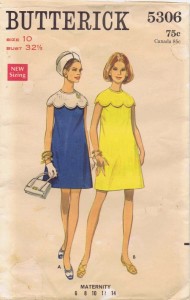 Nevertheless, here we were, Nancy and I, on this crisp, October evening, preparing to hone our skills. She exuded enthusiasm, excited to be adding a new knit dress to her wardrobe. I, on the other hand, just hoped to avoid complete humiliation. As we entered the classroom, we were greeted by three rows of gleaming black, rather fierce looking console sewing machines, twelve in all, plenty of equipment for the nine intermediate-level (I assumed) students and me. Our instructor introduced herself and suggested we each select a “sewing station.”  I settled in at the back-left station and watched with some dismay as Nancy abandoned me for a position front row center, far, far away.

This course was no-nonsense.  There were syllabi and everything.  Week one, re-acquaint yourself with the machine. Week two, practice seam techniques. (News to me.  I thought sewing seams was the technique.)  Week three: work with a pattern, and so forth, all the way to week eight, model and critique.

After the syllabus overview, we were instructed to thread our machines, insert bobbins, and sew a straight line in a piece of scrap material.  Having observed my mother in years past, I felt uncharacteristically capable as I threaded the machine, winding the thread around wheels and through levers and ultimately into the needle, leaving a nice tail, as demonstrated.  I slid open a little chrome door, popped in a bobbin, slid the door closed and inserted some fabric under the needle.  I pressed the power lever with my knee and voila.   Nothing happened.  I pressed harder. The material whipped through the machine and shot cleanly out the back unmarred by a single stitch. Certainly not the result I had anticipated.

Amy, the student next to me, noticed my look of consternation.

“Check your bobbin,” she suggested.

Obviously, she had been discreetly observing me.

I slid the little door open and extracted the bobbin.  I had forgotten to load it with thread.  My brief flirtation with confidence ended then.  I carefully added thread, replaced the bobbin, and prepared to try again.

Place material, flip needle down onto material, press power lever, watch material disappear briskly into the bowels of the machine. The little feet that were supposed to engage and move it along weren’t doing their job.  Stop. Flip up needle, tug at material in embarrassing attempt to get it back. Swear softly. Accept more help from Amy, who was trying unsuccessfully not to look amused.  She showed me how to reverse the machine, and pointed out that my thread had dislodged itself from the needle, so the material was just tangling up in the bobbin, again not forming the neat row of tidy stitches I was by this time desperate to achieve.  Damn bobbins.

By the time I had gotten the machine properly set up for a third try, class was over.  Homework was assigned. We were to go to a fabric store, select a pattern, and choose some knit material. Next week we would be pinning and cutting patterns out of tissue paper instead of practicing sewing seams since everyone, according to our instructor, seemed pretty comfortable with that skill. (Hello?)

A couple days before our next class, I went shopping for a maternity pattern and fabric.  In the bargain bin I found a piece of print polyester that I assumed would qualify as a knit. The royal blue background was emblazoned with a Pennsylvania Dutch pattern of little red and white men and women in breeches and dirndls as you might see in an illustration of Hans Brinker and the Silver Skates. It was really cheap, so I bought a few yards and some matching thread.  I was ready for week two.

After week one’s series of unfortunate events, week two seemed almost too easy.  We traced patterns onto tissue paper, cut and pinned pieces to the real patterns.  There was a demonstration of how to cut according to the material’s weave. Kind of like carving a corned beef.  At last I was learning technique.

Week three was the start of real business. We were asked to pair up and take each other’s measurements prior to cutting out our dress patterns. My partner was Martha, a very sweet woman just a little older than me who mentioned repeatedly that she hadn’t been able to lose her post-pregnancy weight.  Being pregnant myself, I should have found this upsetting, but she was so nice, and clearly so self-conscious, that I felt sorry for her.  I was easy to measure since I would be making a tent with sleeves, but Martha had in mind a sheath-style dress which required much more attention to detail.  As I began to measure, she began to cry.  I really wanted her to feel better about herself, so I did what I thought was a kindness.  I knocked an inch off each of her measurements as I reported them.  She was much happier by the time we cut out our dress pieces.

The following week we basted our garments.  My machine was giving me trouble, losing power and then surging, which made about every fifth stitch pucker.  I was losing heart and interest. I could tell by the look of my dress I would never actually wear it, but Martha’s material was a really attractive gold knit.  She was eager for the next class which included trying on our semi-finished creations.

After a week off for Thanksgiving, we reconvened the following Thursday. Everyone brought their garment, basted and ready to try. When my turn came, I was able to showcase a strangely shaped poncho in an especially garish, yet patriotically colored print.  People were either kind or speechless, maybe both. I didn’t ask for a critique. Martha was in the back of the room struggling to put on her dress which seemed tighter than a sausage casing. I watched, horrified, as Martha became weepy, thinking she had gained weight over Thanksgiving and I realized the awful mistake of my perceived kind gesture as our instructor helped her wriggle out, suggesting they might be able to adjust the seams and “add a little to the back”.

Of course I should have admitted my folly, but I felt so guilty and stupid, I stayed silent.  When after an eternity, class finally ended, I rolled up my dress, stuck it in my bag, and, feeling really sick, fled as fast as I possibly could, never to return.  I don’t know if Martha was able to repair the damage, I didn’t ask Nancy  and she kindly never brought it up

Years later while preparing to move, I unearthed that dreadful garment with the guilt still rolled up inside, and flung it into a Goodwill box, where someone probably, stunned by its hideousness, tossed it in the rag pile. Good riddance! I never did learn to sew, but I assure you the hair shirt I created for myself fit even tighter than Martha’s dress.

Faith has been writing to amuse her family since she was old enough to print letters to her grandparents. Now retired, she has the opportunity (and with Covid restrictions, the time) to share some personal stories, and in the process, discover more about herself.  Faith and her husband live with two elderly cats in Madison, Wisconsin. They are the parents of two great sons and a loving daughter in law.