She passed on May 1, 2020, of a cancer detected so late she—and I—and her sister—barely had six weeks to get from “oh no!” through “why?” and “what next?” to the goodbyes we couldn’t say because of hospital COVID19 regulations. This left me with some stuff to process.

My friend and I met as young entrepreneurs in the 1980s on the women’s networking trail. We began meeting for lunch to whine about the headaches of business. We soon discovered that we both turned to nature for solace and restoration, and began hiking the Baraboo Hills on Sundays. Once our businesses succeeded enough that we had employees, we had the flexibility to get away for longer nature immersions. We began camping and kept it up for ten years or more. We eagerly put in our reservations the moment the state parks system opened in January. We packed the trunk of the car full of gear at least once a month, from May to October, then popped it up to fill campsites in every corner of the state. Other friends joined us when possible. We were a rolling party, decorating our campsites with cheap streamers and holding “Parade of Tents” contests. She moved to a house on my street. We added weekly Friday cocktails to our friendship traditions. For decades we had fun.

But situations change. In the last year before she died, we saw little of each other—I had my mother to look after and she had a new boyfriend. We agreed we would have seasons of closeness again, and gave each other the space we needed for our other relationships. Until the cancer diagnosis. Then my best friend died.

Her sister, who had arrived the moment the diagnosis was pronounced, was suddenly left with the problem of my friend’s houseful of stuff, a burden impossibly heavy for someone so grief-stricken. She had a dumpster delivered to the driveway.

Every day the sister hauled stuff out of that house. My friend had exquisite taste. In spite of her frugal ways, there was not one cheap, ugly, or poorly made item in her house, from the furniture down to the jewelry. The dumpster filled with all her lovely stuff. One month later, off it went to the county landfill.

Almost a year has passed since then. I haven’t been able to stop thinking about that dumpster. I have no knowledge of such things, but Google tells me it was a 20 Yard Dumpster, 22 ft x 7.5 ft x 4.5 ft, capable of holding 4,000 – 6,000 pounds of stuff. At random moments it overtakes me—the image of that dumpster-sized volume, all my friend’s lovely things still together, surrounded and overlaid with other people’s trash.

One Saturday recently I happened across a pop-up event at the Garver Feed Mill, a project of the Dane County Department of Waste & Renewables in collaboration with Madison Children’s Museum. It featured a trailer about the size of that dumpster, outfitted with art made from trash and educational panels explaining what happens at the landfill. “The Trash Lab is a mobile exhibit designed to educate and motivate us to create less trash and rethink our relationship with waste,” says its website. 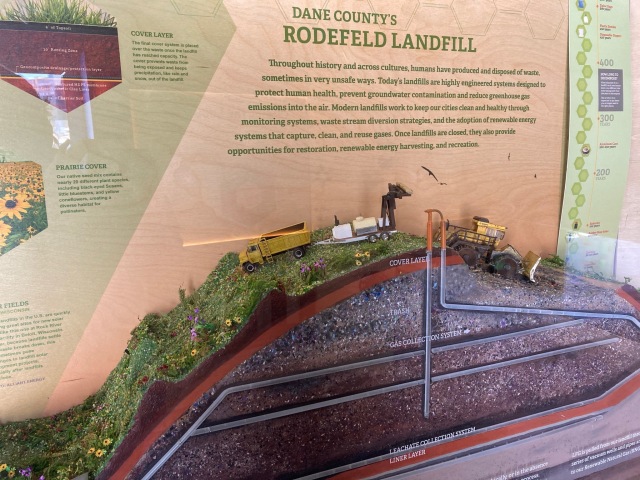 I went up to one of the docents, the one whose day job is at the landfill. “I have a sad question,” I said. “Don’t be freaked out, but I’d like to know…”  I told her about my dead friend, the dumpster, and my perseveration. “Is it all there, still roughly dumpster-shaped, all her stuff?”

The docent replied, “Well, yes it is most likely all together.’ Then her tone shifted to the voice you’d use to explain to a child that her puppy was terminally ill. “But we use a compactor,” she said. “It’s incredibly huge, you can’t even imagine until you stand next to one of its wheels, higher than your head. It rolls back and forth all day over the landfill. We have to compact the stuff, you see, so it doesn’t take up more space than necessary. Otherwise, we’d need new landfills sooner.” I could tell she was afraid she was wounding me. But somehow, I felt healed by her words.

My friend’s stuff is there, a strange invisible memorial, resting in peace. It is like our camping gear, a whole domestic arrangement compacted to as little space as possible. But unlike our camping equipment, this stuff isn’t going to pop up, ever again. Even so, somehow my grief feels compacted as well, smaller, more compartmentalized. Someday I will probably need to unpack it. But for now, I can think about something else.

6 Responses to The Grief Compactor