Invasion on the UW Campus

This is the sixth and final in a series of short essays on the theme of “Invasions”
I’ll be posting. See backstory here… -Sarah White

They were on campus the year before, but this year they were even worse.  There were more of them, they were dirtier, and definitely more annoying, especially to someone like me who was in Army ROTC and soon to be commissioned as a Second Lieutenant going to Vietnam.  No, they weren’t locusts or box elder bugs, they were those darn Vietnam War protesters that invaded the University of Wisconsin-Madison campus in 1966-1967.

Most of us were conscientious students, not conscientious objectors, but a noisy minority insisted on invading our space and our campus.  I swear most of them didn’t study, didn’t go to class, and some of them likely weren’t even college students.  And why do you have to give up bathing, and shaving, and dressing in clean clothes to get your point across?  If they really had something worthwhile to say, why couldn’t they look, dress, and act like the rest of us?

It’s now more than forty years later and I’m for sure older and maybe a little wiser.  I’ve come to realize that how people dress and how much facial hair they have isn’t really that important.  What’s important is what they have to say. 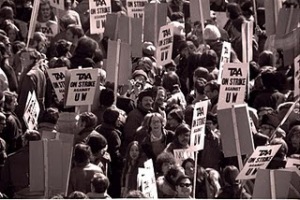 Click here to read more about Wisconsin Oral History Day, which in 2010 focused on memories of the Sterling Hall bombing, 40 years on.

My blog "True Stories Well Told" is a place for people who read and write about real life. I’ve been leading life writing groups since 2004. I teach, coach memoir writers 1:1, and help people publish and share their life stories.
View all posts by first person productions →
This entry was posted in Guest writer, writing workshop and tagged 1960s, invasion. Bookmark the permalink.

1 Response to Invasion on the UW Campus