I just finished reading Patti Smith’s memoir of her relationship with Robert Mapplethorpe, which began in 1967 when she was 19. Just Kids takes us from their first “meet-cute” to his dying breath, March 9, 1989.

I’m not a big fan of celebrity memoirs (or of celebrity culture for that matter) but I looked forward to this book because it’s a front-runner in the sub-genre of memoir that I claim as my turf. Someday I too will write a coming-of-age story set in that curious window of time that opened with the arrival of “free love” and slammed shut at the onset of AIDs.  That Patti’s story happens to take place between two famous people didn’t matter to me, because neither of them were famous yet.

I won’t say much about what takes place in the book–too much potential to be a spoiler. I’ll let you discover her talent for memoir. I’ll only quote this, because I’ve read it in other reviews, and it captures the style of Patti’s writing–“Robert loved Andy Warhol and considered him our most important living artist…documenting the human mis-en-scene in his silver-lined Factory. I didn’t feel for Andy the way Robert did. I hated the soup and felt little for the can.”

What puzzled me most about Patti’s story was the confidence the two shared in their talent as artists. Even as they cast about for a medium that will make their work “work”–it takes forever for her to find a guitar, or him to find a camera–they never EVER doubt themselves, even when they find themselves penniless in a derelict hotel. Where do you get that kind of self-confidence?

What I loved most about this book was Patti’s ability to capture the fluid expectations of that time around sexual roles and responsibilities. She’s capable of helping Robert dress to go out hustling, of critiquing his photographs documenting his S&M demi-monde, without feeling threatened, apparently. Their own dyadic bond never breaks, even as their art and hearts take them in different directions. Pretty cool for two people who were “just kids.” 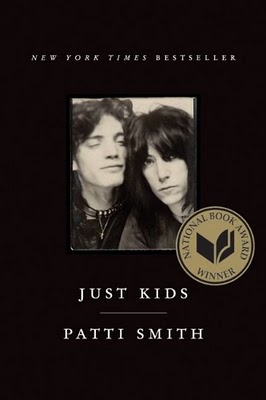