Posted on May 31, 2011 by first person productions

I began attending Carmel Junior High in September 1968, and turned 12 the next month. Difficult things to be, a twelve-year-old, a seventh-grader. In so many ways I was still a child, even though I had become a “young woman” two summers before, if you accept the arrival of menses as the mark of that transition.

I still lived in fantasies most of the time. The hypnosis that came over me while reading could stay with me for hours or even days, depending on the book. When forced to close the covers and meet the world, I went disguised. They might see the plump, shy red-headed girl that was me. But inside I moved about in the persona of whatever hero or heroine had absorbed me.

The problems began when I fell into the appeal of gang story lines.  I think it began with The Cross and the Switchblade, passed to me by my devoutly Methodist grandfather. The movie “West Side Story,” when it came to the Carmel Theater, affected me like a drug. Then in 1967 came The Outsiders, ordered from the National Scholastic book club catalog that last year in elementary school—I can still picture the classroom at the end of the hall where I sat when the box of books arrived, I opened the pages, and fell into the world of Ponyboy and his Greasers and Socs. 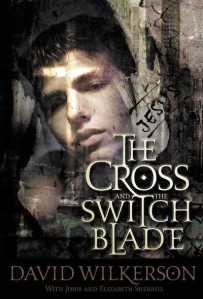 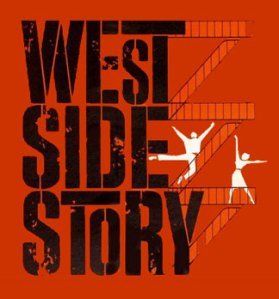 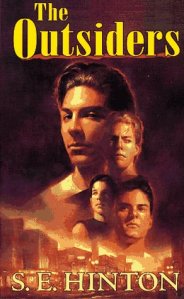 Wikipedia helpfully tells me “The Outsiders deals with themes of friendship and coming of age.” Could anything BE more relevant to my world, on the threshold of junior high?

The religiosity of the young priest in The Cross and the Switchblade didn’t move me; I loved his adversaries, the dark unsaved boys of the ghettos. As for “West Side Story,” it was the character “Anybody’s” I chose—tomboy, tough, and committed to a male identity she’d been cheated of—a position I totally understood. The frisson of sexuality lurking in the name “Anybody’s” suited me too; if she did blossom into a woman, you can be sure she’d be rough trade, nobody’s debutante. But Ponyboy Curtis in The Outsiders was an even better fit. As I prepared to enter the halls of junior high, I merged these three into my new identity.

Every transition contains a chance for a new start. Your first year of junior high is a good example. The old gang from your grade school is diluted by the new rituals of changing classrooms; the new cast of teachers know nothing about you. I had one friend from sixth grade who carried the “gang bug” from The Outsiders to Junior High along with me; her name was Kathy. We kept our gangland play to discussions in her bedroom. Who would you most want to be? Ponyboy’s older brother Sodapop whom everyone loved, so handsome with his dark-gold hair, his wheat jeans and blue shirt? The too-sensitive Johnny? Reckless, powerful Dallas?

But then Kathy’s mother wouldn’t let me play with her anymore. (The result of a misunderstanding over a session with a Ouija board; I don’t think her mom ever knew about our gang fantasies.) Now my “Outsider” fetish had to express itself alone. As school started that fall of 1968, I honed my inner Greaser while appearing in the halls of Carmel Junior High as Betsy from Audubon Drive.

Your work as a seventh grader commences with finding out the unwritten rules of this new environment, reworking your circle of friends to fit who you intend to be, dealing with themes of friendship and coming of age, just like those Outsiders. I flunked at this task. I failed to discern the rules; dropped old friends and failed to make new ones; retreated more into the shell that was “Betsy” on the outside and a Greaser on the inside.

Part of the childhood I couldn’t leave behind was the desire for props for my fantasies.  I couldn’t dress like Ponyboy and Sodapop at school; damn the dress code that forbade wheat jeans for girls. I decided that what I needed was a switchblade, something dangerous and appropriately ganglike, a hidden talisman.

Initial explorations at the Carmel Hardware revealed nothing but hunting knives and pocketknives of the Swiss Army variety. Not sufficiently ganglike. I decided a homemade knife, maybe a shiv would do better. Fumbling in the household jumble drawer, I found a broken pocketknife and electrician’s tape. Downstairs in my father’s workshop I carved a handle from a scrap-end of a 2×4, freed a good blade from the broken knife, and secured the two pieces together with the black tape.

Then I made a sheath for it out of folded cardboard, which I secured to the big binder-clip inside the front cover of the blue fabric-covered 3-ring binder I carried each day, clasped over my chest like schoolgirls have done for 100 years.

Satisfaction! Walking the halls of Carmel Junior High, glorying in my secret knowledge of my secret weapon, I felt as powerful as the oldest boys in the Outsiders’ gang.

Then the shit hit the fan. I don’t remember how it happened, what caused my grip on my notebook to slip in the seventh grade hall between classes, which caused the knife to go flying out if its sheath. It clattered and spun across the floor. Kristie, that girl who had teased me to tears about my “orangey pantyhose” and made me miserable a million other ways, saw it and screamed. “A knife! Betsy has a knife!” You’d think I’d dropped a smoking grenade. Kids scattered. Teachers closed in. Off to the Principal’s office I was marched.

My father was called. Since he worked at home, it was an easy matter for the principal to summon him to the school premises. Waiting for him, I was forced to surface too quickly from the depths of my fantasy. Like a diver with the bends, my ears buzzed, my skin itched, my field of vision shrank to a gray tunnel with only the blue notebook on my lap visible at its other end.

“Why did you do it?” the principal asked. “Why?” Soon enough the other kids who’d witnessed the incident would be asking me the same thing. What answer could I offer?

I had no idea why I had felt compelled to do this particular thing, now so obviously an act of really bad judgment.  I fell back on my powerful imagination, and cooked up a story on the spot.

My father arrived. His reaction was something none of us expected. “A homemade knife? Good for her. But she should have a better one.” That’s all he said.

On the way home, he stopped the car at the Carmel Hardware. Once inside, he purchased one of the smaller Bowie knives for me. “Here you go. You’re old enough for a good knife.” Inarticulate with relief, I rode the rest of the way home silently, deeply grateful—not for the knife, but for his support. He never asked me why I had felt it necessary to make and carry a knife.  And I never asked him why he never asked.

I sincerely doubt it was because he understood that season of my life. My father lived in his own world enough of the time; keen perception about what it’s like to be a 12-year-old girl doesn’t seem very likely. But maybe I underestimate him. Maybe he knew exactly who I was, and how to help me discover who I could become.

At least he knew how to protect me from those who didn’t understand, and for the moment, that was enough. 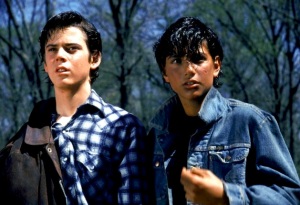 Postscript: A few years later I discovered that the 16-year-old who wrote The Outsiders, S.E. Hinton, was a girl. I had always carried a little seed of doubt about the author’s gender, triggered by that passage that described the color of Sodapop’s jeans as “wheat.” That’s too precise a color term for a boy to use. But confirmation of the author’s female-ness deeply depressed me. I had taken instructions on how to come of age from another girl who was masquerading as a boy. Now where to look for a persona?

My blog "True Stories Well Told" is a place for people who read and write about real life. I’ve been leading life writing groups since 2004. I teach, coach memoir writers 1:1, and help people publish and share their life stories.
View all posts by first person productions →
This entry was posted in Sarah's memoir and tagged 1960s, Carmel. Bookmark the permalink.