In the early Fall of 1968 the recruiters came to Carmel Junior High from the big seed corn companies. They arrived to sign us up for social security cards so we could work for them next summer detasseling. I was not quite 13.

I certainly don’t remember consciously thinking, “hmmm, corn detasseling, sounds like fun.” But I was caught in that awkward doldrum between childhood and teenage life. Not yet in high school, I couldn’t enroll in summer school to make the humid, dull, Indiana summer days pass. When the detasselers came offering 90 cents an hour for our labor, with free transportation to the fields—I signed up.

The year passed and when July of 1969 rolled around, I showed up in the high school parking lot in the pre-dawn dark to begin my work as a field hand. As instructed, I carried a sack lunch and a drinking cup. That first day the razor-thin corn leaves slapped my bare arms, etching a fine criss-crossing of slits like paper cuts. Mosquitoes lurked in the humid microclimate under those leaves and pounced on every inch of bare flesh. I quickly learned to wear long pants and an old white shirt of my father’s.

That first day we were segregated into teams by gender. My group or girls worked under a team leader named Rex. He showed us the rudiments of detasseling, set us to our rows, and then began stalking us as we worked our way up and down the field. Any sign of malingering—talking, slowing down, crossing rows—he’d pounce like the king of cats. Your pay could be downgraded a nickel for the day, or worse, you could be told not to return.

As situations involving evil despots are wont to do, Rex’s tyranny bred solidarity among the masses. Sharing the beratings by Rex made me friendly with a pair of pals from Frankfort, a town about 30 miles northwest of Carmel.

We found we shared a certain outlook. An orientation toward “flower power” was in the air that summer, having taken two years to drift from Golden Gate Park to central Indiana. It was on the radio, it was in the news, and there in the cornfield deflowering the plants, it was in us as well.

We began bringing our guitars along on the corn bus so we could play folk songs together during our lunch break. Before long, the girls (whose names escape me) invited me to come home with them for a weekend. My mother called their mother, and it was arranged. With my overnight bag and guitar case painted with flowers and stars and stripes, I boarded my corn bus that Friday and at the end of the day rode to Frankfort on theirs.

We spent the weekend playing at being the Hippies of Frankfort. Frankfort was a county seat with a population of maybe 10,000, and it was still dawdling along in the 1950s when I got there in the summer of 1969. The shops around the courthouse square still thrived, unbeaten by suburban malls. The town park, with its swimming pool, sporting fields, and shady picnic area, was the hub of adolescent summer life. We set up our Hippie encampment on a blanket with our guitars under the shade trees. We traded our detasseling duds for Hippie outfits—bell-bottoms embroidered and patched, peasant blouses, accessorized with strings of beads. I tied on a leather headband with a star on the forehead. We let our freak flags fly.

We played “Blowin’ in the Wind” and “Where Have All the Flowers Gone.” We sang “House of the Rising Sun” without noticing how absurd lyrics about bad boys in New Orleans sound coming from the mouths of teens in Frankfort, Indiana.

Did we attract attention? You bet. Not as much as we would have liked—a protest march or an arrest would have been nice—but definitely the kids of Frankfort checked us out. This was pleasurable enough that I went back to Frankfort with the girls for several more sleepovers during that detasseling season. When the season ended, we vowed to keep in touch—and we did, with old-fashioned pen-pal letters.

I turned 14 that October. Frankfort’s High School Homecoming weekend came not long after. My girl friends arranged a party—a real party with boys invited. One of their friends—again I can’t recall a name, so let’s call him some cornball tag like Ron or Don—asked me if he could take me out on a date. A date! How cornball is that! But I said yes, realizing that this ‘dating’ was something that probably lay ahead for me, if I didn’t find the real Hippies and run off to a commune in the meantime. Why not get a practice date in, since he asked.

The next Friday, he drove over to Carmel, all 36 miles, to pick me up. Not caring much about him or dating, I have no memories of dressing, waiting for him to arrive—I only barely recall bringing him into the house to introduce to my parents. He drove us back to Frankfort. We practiced small talk, alone for the first time together. I carried a small overnight case, having arranged to save him the drive back to Carmel at night’s end by staying with my girlfriends.

This date was peeled from a 1950s playbook—the dinner at the drive-in, the stop at the school dance, where both us were too shy to dance. He drove circuits around the capital square, out to the drive-in and back. Occasionally we’d pause while Ron/Don rolled down a window to chat with friends, introduced his “new girl.” He glowed with happiness. I glowered.

That was the dullest date in the history of male/female relations. No wonder my Hippies felt the need to swap all that for free love and flower power.

Certain things became crystal clear to me through my granny glasses, peering out between my curtains of hair at the world of 1969. Field work is not the job for me; Ron/Don is not the boy for me; this 50s world is not the place for me.

It would take me longer than I liked to escape, but I was beginning to amass the skills escape would require. My Hippie act was coming together. Pulling flowering tops out of corn plants led to my own first taste of “flower power.” 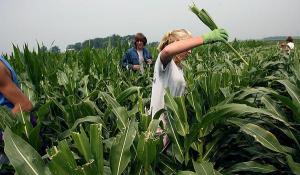 Corn Detasseling from the Kokomo Tribune, July 26, 2007:
Nothing has changed.

My blog "True Stories Well Told" is a place for people who read and write about real life. I’ve been leading life writing groups since 2004. I teach, coach memoir writers 1:1, and help people publish and share their life stories.
View all posts by first person productions →
This entry was posted in Sarah's memoir and tagged 1960s, Carmel. Bookmark the permalink.