Reviews have been appearing about Alexandra Fuller’s new book, Cocktail Hour Under the Tree of Forgetfulness. I haven’t read it yet but I’m eager to, as I fell deeply under Alexandra’s spell when I read her first memoir, Don’t Let’s Go to the Dogs Tonight: An African Childhood, several years ago.

I read that book while in the throes of my Awful Childhood Memoir period. At the time I thought I might have had an awful-enough childhood to get a book out of it. But after reading a string of them–you know the ones, Running with Scissors, The Glass Castle, and their ilk–I have begun to doubt my material. I think I only had a rather uncomfortable childhood, not one of epic proportions. But I digress.

The thing I loved about Don’t Let’s Go to the Dogs Tonight was the potential I recognized in the author’s use of a child’s voice as narrator. The child Alexandra observes her parents’ out-of-bounds behavior and reports on its effect on her. Racists, alcoholics, mad proselytes for their own mad worldview, they have plenty of adverse effects. Children die. Children are uprooted and moved across country time and again. Children are abandoned at schools that are more like prisons. Life hangs by a thread and still the cocktails are served and the dogs root through the refuse thrown from the porch. All of it told in a first person, present tense voice, often in dialogue that propels you into a child’s world with such speed it leaves behind adult doubts of “how could she possibly remember all that?”

This is a voice I would like to achieve in my own writing. Which reminds me how important it is for writers to READ.

The two memoirs form a fascinating diptych of mirrors, one the reflection of a child’s mind, the other of an adult’s. Images bounce and refract over the years; the reader catches a glimpse of the adult in the child, and the child in the adult. Taken together, as they ought to be, the books transport us to a grand landscape of love, loss, longing and reconcilliation.

Can’t wait to read the new one. While I wait for it I think I’ll reread the first. 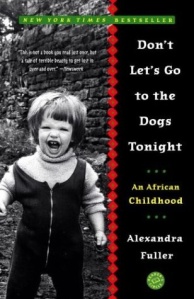