Getting and Spending in Carmel Indiana, 1960s

This was written in response to the writing prompt, “The role of money in your life.”

I have always had a sense of myself as an earner, a participant in the economy, not just a consumer. I was born to free-lance.

The earliest money I earned was for memorizing poems. My father would pay a quarter for a poem recited by memory. One quarter, no matter whether the poem was a 4-line Ogden Nash ditty or seventeen stanzas of “The Highwayman” or “Dangerous Dan McGee”. I became very fond of Robert Service poetry. Also Lewis Carroll. I can still give you “Jabberwocky” by heart, but very little else has stuck.

My brothers and I also received an allowance of a quarter a week, for which we were to perform certain assigned jobs, designed to teach us about the basic practice of getting and spending. My assigned job was counting the trains that went by my grandparents’ house. I don’t recall how I earned it when we weren’t visiting the grandparents. My brothers each had an assigned job too—David’s was finding the moon each night. I don’t know what Andy’s was.

Of these earnings, a tenth was supposed to go in the collection plate, and we were taught to place our sticky pennies into little paper envelopes for that brass vessel.

I was more interested in spending my money at the drug store. Twelve cents would go to a comic book, and ten to a vanilla phosphate, my favorite beverage. Candy bar, perhaps, if no new comic books were on the revolving rack—Bonomo Turkish Taffy, which required someone with a cast on a limb to whack it against and thus reduce it to fragments. After a penny-candy store opened in downtown Carmel, sometime about 1964, the change from my quarter after those purchases at the drug store would go to a few bits of candy—root beer barrels, or sticks of peppermint, perhaps. 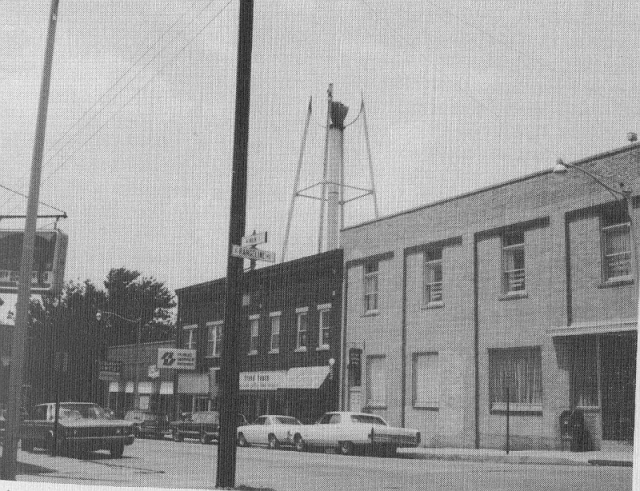 When I got a little older, my ways of earning expanded. The lady next door owned the Carmel movie theater. Every month she had schedules printed and subcontracted their distribution to my family. Delivering to every door in Carmel began as my oldest brother’s job, expanded to the next brother, and finally, about 1963 or ‘64, I was taken into the trade. (The population of Carmel was 1,442 in 1960 but 6,568 in 1970,  so presumably I was needed to handle the rapid growth in doors needing delivery.)

We were paid a nickel a piece—a lucrative business as Carmel grew. I soon had the whole business to myself, as the brothers graduated to newspaper routes. I biked to Carmel’s ever-expanding suburban neighborhoods and then walked door to door, curling the pastel card-stock programs into a screen door handle or tucking them under a doormat. I was soon earning several hundred dollars a month.

I enjoyed the movie program delivery business very much, mostly for the opportunity to spy on how other people lived. In winter I’d do my deliveries in the twilight gloom of late afternoon. I could see into living rooms decorated for Christmas, or see a family around the dinner table, in a Norman Rockwell glow. Somehow I knew our home life was odder than theirs, and I relished the clues of how “normal” people lived.

More earning streams followed as I entered junior high. My skill as a draftsman brought me commissions for greeting cards, posters for the League of Women Voters, and such. I had little original artistic vision, but a good hand as a copyist—show me anything in any style, and I could do a pretty good job of mimicry. I soon had a steady business going with neighborhood ladies and their volunteer causes.

Meanwhile my friends began their working lives scooping ice cream at Baskin Robbins or working the counter at Dairy Queen. I tagged along into a DQ job at age 13 but was let go at the end of my second week. No reason was given and I didn’t ask. I blame my inability to conceive of making myself useful between customers.

The earnings I didn’t spent at the drug store, hardware store toy aisle, or penny-candy shop went in the bank. My old-fashioned passbook filled with entries, deposits swelling to several hundred dollars, approached five, then passed that milestone.

That’s why I thought I could afford to buy a horse. And that’s where this story ends, and another begins…

My blog "True Stories Well Told" is a place for people who read and write about real life. I’ve been leading life writing groups since 2004. I teach, coach memoir writers 1:1, and help people publish and share their life stories.
View all posts by first person productions →
This entry was posted in Sarah's memoir, Writing prompt and tagged 1960s, Carmel. Bookmark the permalink.

3 Responses to Getting and Spending in Carmel Indiana, 1960s