It’s a generational shibboleth. I was born in 1956–the dividing year for Baby Boomerhood. That was the year that, according to the demographers, the Leading Edge (1946-55) yielded to the Trailing Edge (1956-65.) Since I was born in October, I guess that puts me on the Trailing side. The fact that I preferred the Monkees to the Beatles seals the deal.

Davy Jones’ death cannot go without recognition by me, revealed as the bubble-gum teeny-bopper that I was in 1966 when the Monkees was my favorite TV show and Davy was my favorite Monkee.

The tambourine. The British accent. The slight build, just my size. (I probably already outweighed him in 1966.)

The TV show that featured  music videos 15 years before MTV first aired.  The bouncy pop that slyly veered toward subversion. No Rolling Stones, but not Tommy Boyce & Bobby Hart, either. (Another of my favorites. Gawd this is embarassing.)

I strung the Christmas lights around my bedroom to create psychedelic atmosphere–even though they created interference with my radio–and I sent my ears reaching out to connect with the world of the Youthquake. I sewed bell-bottoms out of brightly floral fabric and braided flowers in my hair. I learned to play the guitar. I practiced singing with a British accent just like Davy. I lived in the world of the Monkees beach-house beach-party as much as possible in Carmel, Indiana, playing with my little friends at being the rock band that’s “too busy singing / to put anybody down.”

The New York Times obit describes Monkees fans as “Tweeners before the word was applied to that demographic.”

Guilty as charged. It’s a burden, being a person who once preferred the Monkees to the Beatles. I’ve been trying to live it down ever since. But just this once, I’m letting my teeny-freak flag fly.

“Another Pleasant Valley Sunday,” anyone? 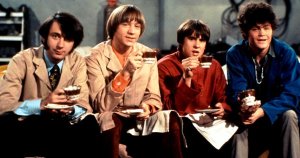