Thoughts on “The Courage to Write: How Writers Transcend Fear”

Ralph Keyes has been peeping in my windows.  At least that’s how it felt as I made my way through his book The Courage to Write:  How Writers Transcend Fear earlier this summer.  Keyes’ book is a litany of the fears writers face every excruciating step of the way–from facing down the blank page and its relentless blinking cursor, to standing before a writing group to squeak out a few paragraphs we don’t think are too god-awful, to the nearly unbearable wait for reactions once a successful work is sent out into the world.

Those mornings I had some time to write, I’d sit on my couch with coffee and toast and read a few pages of his book before getting started.  As a newbie writer I’ve only encountered the earlier fears he writes about.  I am still duking it out on a daily basis with my twin urges to write! write! and those that quickly follow, those that feel like an electric shock and make me want to lay my hands over the words that reveal the goings-on inside my head.  But it’s clear Ralph Keyes knows me well.

Reading The Courage to Write made me feel, if not quite serene, that my stomach-churning fears about writing are normal, productive even, and that I’m not the only one whose anxieties manifest as kooky superstitions.  I think Mr. Keyes would smile gently from his spot amidst the shrubbery in the front yard and nod encouragingly at my justifications when the doorbell rings mid-day.  “Why yes, Attractive FedEx Delivery Person, it is 1pm, and I am still in my pajamas. But you see, I am only able to wrestle words onto paper if I move directly from morning coffee to dining room table, teeth unbrushed and hair askew, and let the words start to unspool before my conscious self wakes up and has a chance to dig out its red pen.  Sorry about the coffee breath, it’s just that I’m, you know, writing…” 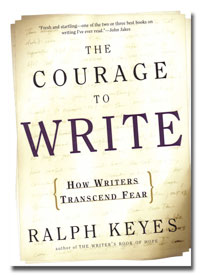 I’m not suggesting it’s an easy read.  The first half of the book leaves you with the sense you’ve been methodically stripped naked.  Keyes names every fear you’ve ever had about yourself and your writing, with unflinching but kind-hearted candor.   He doesn’t just call out those fears that are acceptable, the ones writers joke publicly about–the writer’s block, the pointed suggestions from an editor, the tepid, standoff-ish reviews, but also the more fundamental fears about ourselves, our abilities, and the darkness of our souls that both the process and products of our writing reveal.   I responded to each fear he ticked off with a yelp of recognition or an “Oh crap, I hadn’t even thought about that yet.”

I’m still puzzling over one set of fears he discusses, but there was a grain of truth that made me squirm in my seat when I read about them and the idea has stuck with me ever since.  I think what he was saying is that writers are often chased by two seemingly contradictory voices inside their heads.  One voice is the steady drumbeat of doubt, asking who the hell you think you are to be filling up air space with your pedantic drivel.  This is actually the more attractive voice, the one people are willing to admit to.  The other fear is about how exquisitely vulnerable we are when we acknowledge that we think we might have some tiny measure of talent, and we’d desperately like for you to notice it too.  This is doubt’s embarrassingly forthright cousin and it snaps back, “Oh please, cut the bullshit!  You totally think you have something worthwhile to say.  You stand in the shower and repeat that perfect, effervescent phrase you wrote this morning.  You shiver with delight over the ooh’s and mm hmm’s you’ll elicit from your writing group buddies tonight.  You want to lap up their recognition.  Worse yet, you think you deserve it.”  Anne Lamotte said something similar in Traveling Mercies, I think, about suffering from a monumental inferiority complex, second only to her insanely conceited views of her own abilities.  I’m still trying to wrap my head around the contradiction here, but I think that Keyes is reminding us that, on some level, writing is about 360-degree vulnerability. 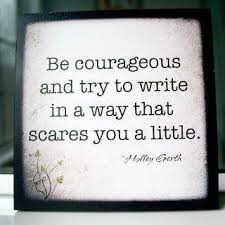 Luckily the second half of the book helps you pull on a few clothes.  After you stand naked in front of the mirror and take a nice long gander, the author pats your hand, reminds you that every writer winces at their stretch marks and love handles, then hands you a robe and gently leads you back to the keyboard.  Use it, he urges.  Use that discomfort and fear to find the stuff that needs to be said.  It’s supposed to hurt.  That’s how you know you’re doing it right.  I don’t think he’s encouraging us to simply grit our teeth and plow through our fears, but to get know them a little, hear what they might be trying to tell us, and use their energy to fuel our writing, whatever that looks like.  Need to sit in your PJ’s and start writing before your inner-editor wakes up?  Ok, get cracking.  Can’t bear to ask for feedback until your work is absolutely done, because you know you’ll crumble if you don’t get every last dark shadow and disturbing bit out all at once?  Fine, do that.  Need a writing group to cheer you on, to lavish those first halting paragraphs with so much praise you’ll be able to muster up the courage to write the rest of it, even the part that’s been scaring you for so long?  Great, find those people and invite them over.  Open a bottle of wine, feed them a little cheese, and tell them what you need.

The only parts of the book that occasionally clanged were the many quotes and anecdotes about famous writers’ quirks and hang-ups.  But even here Keyes can’t help but endear.  He admits that some reviewers of a draft of the book found them distracting, but others liked them so he decided to keep them in.  I mostly found the anecdotes validating and sweet, but occasionally my snarky side piped up.  “Easy for you to say, Ernest-freaking-Hemingway.  Boo hoo, Ms. Allende, it took publishing your third wildly successful novel for you to stop putting ‘housewife’ down as your profession.  Cry me a river.”  It didn’t seem possible that it could still be hard for world-renowned writers to write, that it could really be that big of a challenge for them to overcome their misgivings as they stand atop the writing world, seemingly secure in its acclaim.  But I think Keyes’ point here again is that the fear never really goes away, not for anyone.  Or if it does, it’s probably a sign that we’re just skirting around the edges of the truth, staying inside the roped-off walkway, unwilling to leap down into the bubbling pit and slog our way through the mess.

What I loved most about the book is that Keyes is so clearly on our side.  He wants us to face down our fears and write, even if it hurts.  He’s peered in the window and seen us looking our worst, but he thinks the sheen of sweat and our faces screwed up in attempts at courage look just about right.  I joke that for me writing is cheap therapy.  I don’t benefit from the insights a good therapist would have on the baggage I’d trot out before her, but there’s something about the process of brewing the thoughts in my head into words on a page that feels almost as valuable.  Writing is awful.  It’s embarrassing and scary and exhausting.  And yet there are days when it’s all I want to do.

I stumbled on Ralph Keyes’ book at the library a few months ago, renewed it as many times as I was allowed, then went out and bought myself a copy.   His book sits on a little table next to my couch, ready for the next time I need another perfectly-tuned, not-so-gentle nudge to strip down and write.  I’ll probably pick it up again tomorrow. 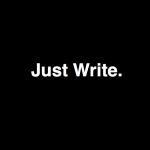 My blog "True Stories Well Told" is a place for people who read and write about real life. I’ve been leading life writing groups since 2004. I teach, coach memoir writers 1:1, and help people publish and share their life stories.
View all posts by first person productions →
This entry was posted in Book review, Guest writer. Bookmark the permalink.