The season of vicarious wanderlust on True Stories Well Told rolls on through end of June. 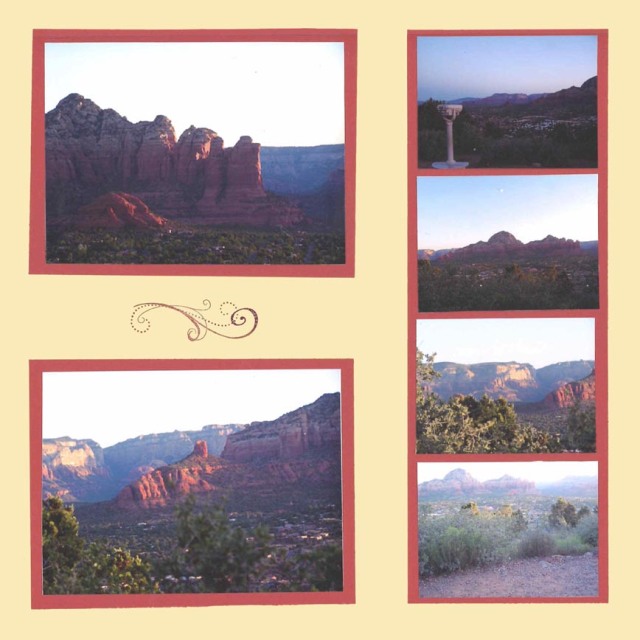 Taking these pictures of the Sedona sunrise was a simple act of clicking the shutter. Getting to the spot where I took them required a bit more effort.

When we went to bed Wednesday night, John had been adamant that he was too tired to get up to view a sunrise, no matter how potentially breathtaking it might be. I wasn’t sure I’d have the confidence to do it on my own, but I set the alarm for 4 a.m. just in case. I woke up frequently during the night, and looked at the clock each time: 11:30. (Gosh, I’ve only been asleep for an hour or so.) 1:30. (Still too early. Go back to sleep.) 2:30. (Nope, not yet.) At 3:45 I turned off the alarm.

“I’m really comfortable. Maybe I’ll just sleep in, too,” I thought. And that’s when she started in on me.

Damn. No matter where I go, that little internal voice won’t leave me alone.

“But you said you wanted to do this,” she prodded.

“Look, I have no idea what the route to the airport observation point looks like. You know I navigate by visual clues.”

“So it takes an extra turn or two.”

I knew she could out-logic me, so I tried another approach. “It’s not that big a deal anyway. I’ve seen sunrises before.”

“Yeah, and exactly how many times have you seen one in Sedona?”

“Besides, when you get home, you’re gonna be really mad at yourself for not at least trying.”

Sometimes her nagging is actually helpful.

I jumped out of bed, not in a courageous leap, but quickly, so I didn’t have time to change my mind. Fearing I’d hesitated too long and might now miss the whole thing, I grabbed the clothes I’d laid out last night (also just in case) and hastily put them on. After a quick trip to the bathroom, I opened the door, closed it quietly behind me―and was startled by the darkness.

“Duh! You’re headed out to take pictures of a sunrise. If the sun isn’t up yet, that means it’s still dark outside.”

I knew that. Nonetheless, I wasn’t prepared to see it. Of course the room had been dark, but with the heavy draperies motels use, it’s not uncommon for it to be dark inside and bright outside. Good thing I hadn’t given it any conscious thought or I might not have gotten out of bed after all.

Once I got to the car, my next challenge was to orient myself on the map so I’d know which way to turn out of the motel parking lot. Normally when I’m on unfamiliar turf, I drive a few blocks, noting the names of the side streets I pass and the order in which I pass them. Then I pull over, find those streets on the map, and turn it around until the streets appear in the same order as I passed them. But since Motel Lady had told us that the Days Inn was on the far west edge of town, I was able to figure it out while sitting still. (Those readers who are as directionally challenged as I am understand this. Those who aren’t can stop laughing now.)

There was just enough light from the dashboard to see the street names on the map. Unfortunately, reading the actual street signs was harder. (If only my eyes were still as sharp as when I read Nancy Drew books under the covers. ) What if I’d already passed Airport Drive? How long would I go before I gave up and decided I’d missed it? The last thing I wanted to do was make a u-turn and look foolish.

At that thought, she spoke up again. “And exactly who is it, Nancy, that you think is hovering on these empty streets at 4:30 in the morning, waiting to point their finger at you and laugh at your incompetence?”

I stopped paying so much attention to my doubts and settled in to enjoy the ride. And suddenly there it was: Airport Drive. Wow, I’d found it!

From this point on the map showed no more street names, just a squiggly line that ended at Airport Mesa. No problem. I didn’t have time for the map now anyway. That squiggly line was in reality a narrow, winding road up the side of the canyon, and driving it demanded my full attention.

Motel Lady had said there would be a parking lot across the road from the vista point, but I didn’t know how far up the road it would be. I hoped I’d see it in enough time to slow down safely before having to turn off. At 25 mph, that seemed likely. (I hadn’t noticed any speed limit signs, but driving this winding road in the dark made 25 feel plenty fast enough to me.) Even without the map, though, I was confident that the parking lot would be on my left. (There was, after all, nothing on my right but air.)

Suddenly there it was, the vista point parking lot. I’d found it on my own without any miscues or even one u-turn!

After gathering my camera, journal, and flashlight, I double-checked to make sure I’d put the key in my pocket. (I certainly didn’t want a repeat of the San Francisco vista point experience.) Then literally grinning from ear to ear, I walked across the road to watch the sun rise over the red rocks of Sedona, Arizona.

In 1988, on my first solo travel adventure, I was driving a friend’s car from San Jose to Marin County, California, when I saw a sign for a Vista Point. “Why Not?” I thought. So I got off the highway and headed up the side of a mountain. That time, too, I made sure I had the car key with me before locking the doors. Unfortunately I didn’t know that unlike my Camry, my friend’s Pontiac Firebird required two keys: one for the ignition and one for the door locks. I obviously had the ignition key, but my friend had failed to give me the one to unlock the doors. For the details of how I got the car―and me―off the mountain, read that 1988 story.

My blog "True Stories Well Told" is a place for people who read and write about real life. I’ve been leading life writing groups since 2004. I teach, coach memoir writers 1:1, and help people publish and share their life stories.
View all posts by first person productions →
This entry was posted in Guest writer and tagged Sedona, travel. Bookmark the permalink.