Journal of a Camp Host: Excerpts

baThe season of vicarious wanderlust on True Stories Well Told rolls on through end of June.

Excerpts from the book Journal of a Camp Host

Check out the book! http://www.journalofacamphost.com

Who would have thought a year ago (when we were snowmobiling on the endless trails of northern Wisconsin) we would today be down here, out on these sandy trails in a new Polaris mini-Jeep. The yellow coded “Long Leaf” trail is a challenge, as it’s barely wide enough to accommodate the Jeep, meaning the branches are in our faces a lot. Also some curvy turns are so sharp we have to watch that the top bars of the Jeep don’t catch the tree branches as we tilt-a-whirl on through. Then we hit a series of mounding bumps, sometimes dozens in a row, left behind from the 4-wheelers. What a RUSH, haven’t been on a ride like that since my last visit to Great America Amusement Park.

More care packages arrive, from my Mom and Mark’s daughter. Now I know how important it is to send these type of gifts to the troops abroad—you really look forward to them. It doesn’t replace being with family, but it sure helps fill the gap. We go into town to stock up on groceries and have our water camel refilled, gearing up for the upcoming two weeks of Holiday campers.

The weather is cooperating and as planned we are having guests tonight for a BBQ. Mark helps me prepare the shish-ka-bobs and sets up the mini-bar. I clean the shrimp, placing them in a serving tray with spinach dip and crackers on the card table outside on our patio. People stop in for a drink and snacks. Iris is on her cable watching everything going on. Next thing I know she’s up on the table and has the biggest shrimp from the bowl in her mouth. Luckily the guests thought it was hilarious and demanded I let her have the treat. This is not like her to help herself to the food, but I guess it was simply too temping. Back in ’07 my sister and her husband had invited us to Christmas Eve dinner and she was treated to a taste of caviar. Could be she was reminiscing of a Christmas past.

Volunteers gather at the Lake George Center for a potluck Christmas Lunch. What a feast! I don’t remember eating like that even at a commercial brunch, also great conversation and company. After lunch we team up for Trivia, and Mark shows off his gathered Jeopardy expertise.

Stopping for groceries on the way home, we see what we think to be the start of the Rainbow people coming into town, outside of the Winn Dixie supermarket looking for handouts. Another beautiful day outside so we enjoy the evening sitting on the patio again. The campground is only about one third full, not as busy as expected. Hopefully the New Years brings more campers.

Living in these close quarters, especially when the weather is cold, is a challenge in itself for any couple. Now Delancy East Camp Host’s car is dead and Eastwood is not feeling well enough to tackle the problem. He did not walk over for Christmas Eve and Letty says he’s always a big scrooge when the holidays roll around. She walks over one evening in tears and needs a ride for a cig run, closest point of purchase Club 88. So I leave Mark behind and we go for a few drinks and warm up by the fireplace. Being together 24/7 makes one much more sensitive to your partner’s shortcomings on a daily basis, we both agree, after some discussion on the topic.

She decides to go over to her sister’s for a few days until Eastwood moves out of his slump. But only a day or so later Eastwood speeds by in the car. I guess the warmer temperature helped it to start right up, no new parts needed.

Mark’s sister and her husband come up from Southern Florida for a visit and bring along their huge black Great Dane, Stella. This dog is larger than some small horses I’ve seen. Iris is not impressed by the dog’s size however, and almost busts through the trailer screen door to attack. She hasn’t been this upset since her last visit to the vet.

We have a nice visit once the animals calm down and are kept separated. Later we decided to go see the “picking group” play their instruments at Club 88. Weather has been warmer again and we sit on the front porch to listen and sip the 75-cent cold Bud Selects they serve in chilled mugs. Campgrounds is about 75 percent full and lots of day riders also deciding to pay the $6/vehicle to park here for the day.

We celebrate with a special bottle of Barefoot Champagne, a gift, and rib eye steaks on the grill. As usual, I never make it to midnight, but sit out by the fire with the Christmas lights on longer than on other nights of the year. Finally Iris and I retire and Mark says he wants to sit outside for a bit yet.

Crash—“HELP!” I open the trailer door to find Mark on the ground unable to walk. He had decided to polish off the rest of the whiskey and then walk over to East Delancy to visit. Unfortunately he didn’t make it back without stumbling and falling a few times, and was in quite a state by the time I helped him up through the trailer door. His disability really kicks him in the butt when he over-partakes of the happy juice. Of course I give him the “buddy system” talk again and help him to bed. The middle of the Ocala Forest is nowhere to be rolling around after midnight. You may become bear bait or worse!

Two fellows show up on foot at our site looking for the Florida Hiking Trail. They were turned around and trying to find their way back to their camp up near Rodman Dam. The trailhead is right across the road from us and I gave them a map of the entire Florida Trail system, as they explained they were trying to walk the whole thing. They had spoken with another fellow who said he did it and only had $84 to his name to spend. I thought to myself, the next thing they spend money on should be a compass. They decided to go on this “walkabout” (as they called it, like the Australian Bushmen) since they both recently ended up jobless and had nothing else to lose. I pointed them in the right direction back towards their camp and said a few Hail Mary’s for them both that night 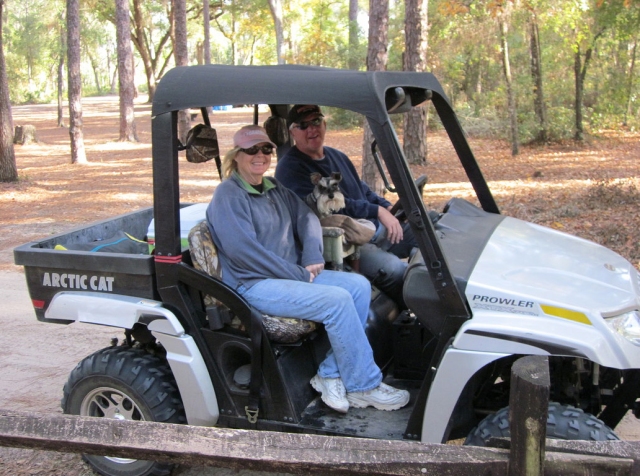 A good-looking fellow, “JR” is a bit younger than us I would guess, with crew cut and always dressed in a neat clean Forestry uniform. He, along with his superior Ocala Ranger, originally interviewed us for the volunteer position. He is great to work with and has a real love for the outdoors.

JR hit the trails today, as part of his duties, out patrolling the Delancy Loops.

A few hours later he pulls up alongside our site looking pale as a ghost. He had a close call with a 4-wheeler going too fast for conditions. The guy ran right up the front of JR’s OHV and flipped. Luckily no one was injured. But that guy picked the wrong person to hit—he was issued a ticket of course. I can only imagine what went through JR’s mind in those few minutes; his wife and child surely. He sat for a bit to compose himself, then headed back to the Ranger Station. All the trails are two-way traffic and even being on guard, you are always at risk of other bad drivers. Riding safe is somewhat of a gamble, especially on busy weekends and holidays.

Amazingly we have managed to “keep the peace” amongst a variety of visitors . . .riders, hunters, hikers and rangers. Like the delicate eco-system of this area, too much sway one way or the other would be cause for major concern.

After a 30 year career spent in the corporate world, while earning an Applied Science Degree in Marketing and Graphic Communications, author MC Hansen set out on a free-lance venture Camp Hosting with her cat and newly found handsome partner/photographer. JOURNAL OF A CAMP HOST is a comedic and romantic non-fiction journal of actual events that took place during their time in the Nicolet and Ocala National Forests. Also recorded, cross-country travel routes with some heart-felt lessons learned along the way.

My blog "True Stories Well Told" is a place for people who read and write about real life. I’ve been leading life writing groups since 2004. I teach, coach memoir writers 1:1, and help people publish and share their life stories.
View all posts by first person productions →
This entry was posted in Guest writer and tagged camp host, travel. Bookmark the permalink.