Ariel Levy: “The Rules Do Not Apply”

Once in a blue moon the stars align to allow me to read a book practically uninterrupted from first page to last. Usually it requires a long airplane flight to grant me that bubble of space/time I can disappear into, like (I Dream of) Jeannie into her bottle, and nestle there with nothing but a book.

For some reason last weekend was a quiet one. I spent it with Ariel Levy, coming along on her quest to “have it all” in her 2017 memoir, The Rules Do Not Apply, starting Saturday evening after picking it up at the library and ending Monday morning over coffee in bed. 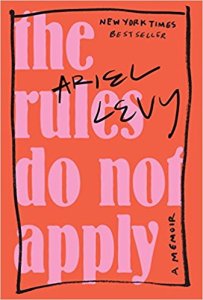 Ariel Levy’s memoir centers on the struggle between her career and personal ambitions that culminated in giving premature birth in a Mongolian hotel room at Thanksgiving, 2012. The baby lived only a few hours.  In the aftermath of that tragedy, Ariel saw the rest of her life come apart like fragments of that Jeannie’s bottle, shattered.

One paragraph sums up the clockwork that puts this tragedy in motion:

I wanted what we all want: everything. We want a mate who feels like family and a lover who is exotic, surprising. We want to be youthful adventurers and middle-aged mothers. We want intimacy and autonomy, safety and stimulation, reassurance and novelty, coziness and thrills. But we can’t have it all.

Levy’s memoir of a white, privileged, feminist 30-something woman’s experience follows normal desires through the looking glass into gay and trans relationships where normalcy is, perhaps, even more sweet, and into professional newsrooms where, for an ambitious young woman, recognition and advancement is also addictively sweet.

Levy is a journalist and her writing has both the strengths and weaknesses of that trade-turned-profession. She writes with clarity and confidence, and turns an unsparing eye on herself as well as others. She does what I’ve always hated about journalism since my days in J101 at Indiana University: sticks the microphone in the tragic victim’s face and asks “how does it feel?” Even when that face is hers.

And yet. In spite of herself, Levy comes across as an unreliable narrator, whose life choices made me squirm, even as she castigated herself for those choices. The unsparing eye can distort even as it regards. The last time I felt this combination of “squick” and “must keep reading” was when I read Marya Hornbacher’s Wasted: A Memoir of Anorexia and Bulimia.

Back to Ariel Levy: Two quotes sum up the push and pull of this sad, true, story. She closes her preface with this reflection: “People have been telling me since I was a little girl that I was too fervent, too forceful, too much. I thought I had harnessed the power of my own strength and greed and love in a life that could contain it. But it has exploded.” Much later, she interviews Maureen Dowd, who tells her, “Not everybody gets everything.”

Levy’s use of language is wonderful, as one might expect of a writer for the New Yorker. Better yet, she found a good structure for this book, and a delightful (IMHO, not everyone on GoodReads agrees) way to end it–not easy for a mid-life memoir. When young (ish) people write memoirs, necessarily, the book ends before the life chronicled winds down. She gives her story three endings, in which she fantasizes about what happens next, leaving you to choose and hope too.

I’ll close with this quote from “Esil” on GoodReads: “I’m not sure I would recommend this so much because of the story Levy has to tell, but more because of how she tells her story.”

Have you read The Rules Do Not Apply? What did you think?