This is the fourth episode of a memoir that is unfolding, one chapter each month, here on True Stories Well Told. Stay tuned for more of the adventure as teenage Suzy’s family moves to Europe, builds a sailboat, and takes up life on the high seas circa 1961. Click here to read the earlier episodes.

Our first landfall was in North Africa: Casablanca, Morocco.  We descended here to take a tour of the city with an African we’d met onboard ship. The white buildings with ornate shapes and tile decor stood out in stark contrast to anything we’d ever seen.  We learned that “Casablanca” meant “white house.” I’d never see the skin color of these people, not white or black, but a dark brown, as if they’d been sunbathing every day.  Their clothing was of dark colors, too.  The women wore veils that covered their faces, except the eyes. Small children flocked to us begging for coins, their faces scarred from disease.  Their language sounded confusing and frantic, but the tone reminded me of fast music.  Dirt, filth, and pungent odors permeated everything.  I thought of the missionary family and wondered if their town had this squalor.  It appeared impossible that rising out of this grime stood the most gorgeous buildings I’d ever seen.  The ornate mosques reminded me of “Scheherazade and the 1001 Nights,” a story my fifth grade teacher had read to us.  Monkeys on leashes dancing to organ grinders sashayed up to us for coins.  We even saw a monkey smoking a cigarette. 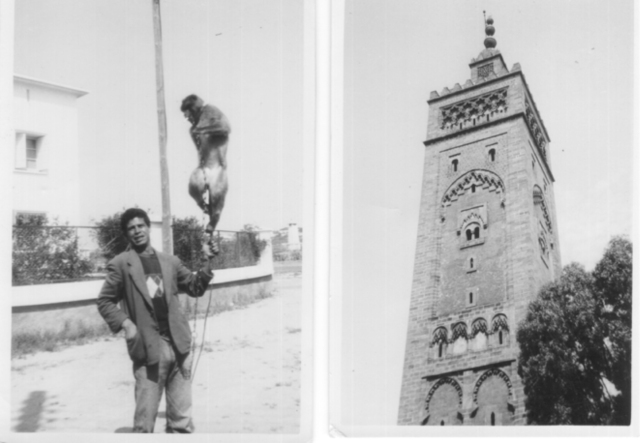 We re-boarded the ship and sailed on to Gibraltar where it slowed to a stop and dozens of small boats came out to sell things to the passengers.  Long ropes thrown up and baskets of colorful trinkets, bracelets, and scarfs came on board.  We leaned over the edge of the ship to see these strange boats filled with merchandise.  The Augustus sailed on past Gibraltar into the blue Mediterranean. 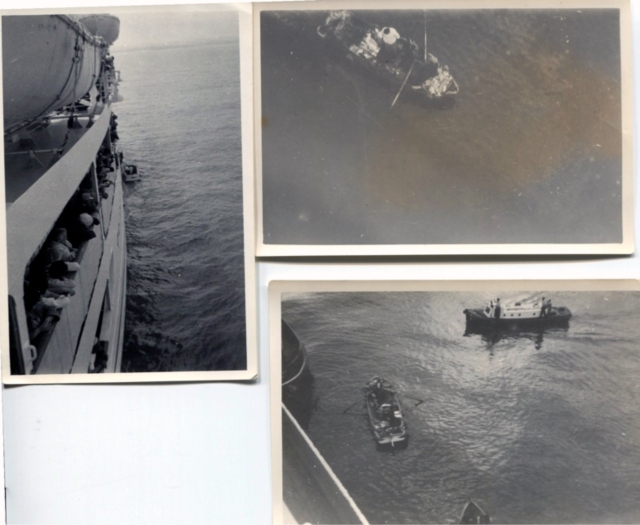 We arrived at our destination of Barcelona, Spain after five days at sea.  Our suitcases in hand, we headed down the gangplank to foreign soil, a foreign language, and foreign customs officers.  Our trunks sat on the docks.  They’d been brought up from the depths of the ship. The customs officer told us to open our suitcases and the trunks.  Worrying they might arrest him; Dad tried to explain that he’d packed a revolver in one trunk, but couldn’t remember which one.  He’d brought it as a security measure to have on our sailboat. He’d heard stories of pirates commandeering private boats or just trying to steal from them, so the revolver was for our protection.   Dad pointed to the Guardia’s pistol and then to the trunks.  At that point, the Guardia dumped our trunks onto the docks and the customs officers rummaged through them until they found the pistol and confiscated it.   I stared at the police in fear.  The Guardiawore triangular-shaped, hard plastic hats that made them appear sinister. They wore guns and screamed at my Dad.   Angry and embarrassed, Mom cried watching our belongings being scattered on the docks. Once they found the pistol, they left us to repack everything.  The Augustus, our home for the past five days, lay empty beside the dock.  Everyone else had disembarked and gone on with their lives while we faced an uncertain future.

Dad located two taxis, and he explained we needed a hotel for the night.  He went in one cab with several of us and Mom in another with the others.  Our cabs circled around the strange city until we stopped at a small hotel where we got rooms.  Upon investigation of the bathroom, I discovered the pull chain flush toilets and “bidets.”   I decided they must be for washing feet. The room I shared with my sister had two beds and flimsy bed covers.  The room was sparse with only a large cabinet against one wall.   I’d never seen an armoire before and at first didn’t understand what it was for, but upon further inspection found hangers in it. We put our coats in it.  Mom told us not to bother with unpacking because we would be on the night boat to Mallorca the next evening.  The elevator was old and rickety, so I used the stairs.

After getting settled we headed out for a walk on the Ramblas, the main avenue of the city.  The sights and sounds excited me.   We discovered that just crossing the street was dangerous. Motorbikes, Vespas, and bicycles dodged the car traffic without adhering to the traffic laws.   The diesel odor of the cars and buses permeated the air.  People shouted at us.  The looks and gestures soon became too much for Mom and she sought a bench. An old man came up to her waving his hands and making wild gestures.  Mom tried to just ignore him.  She had Frank and Conrad sitting beside her when he motioned to the boys she tried to understand.  “What is he saying?  Why is he yelling at us?”  Mom’s face turned red with anger and frustration.  We couldn’t help her.  She motioned to us to follow her, and we headed back to the hotel.  We found out later that it cost money to sit on the benches. Our first meeting with a Spaniard hadn’t gone well.

Later in the evening we descended from the upper floor to the dining room for dinner. We sat at a long table put together just to accommodate us.  The menus in Spanish left us wondering how to order.  “We want hamburgers and French fries.” called out Frank and Conrad. When told they weren’t available they both cried.  Dad chose everything for us.  They served a salad first, but none of us trusted what we might find in it.  The main course was chicken with mushrooms and fried potatoes.  I’d never eaten mushrooms before, so I picked at the chicken, but ate the potatoes with relish.   Dad ordered ice cream for dessert.  Even though it tasted different, at least it was familiar. With our first day in Spain over, my sister and I rushed into our pajamas and fell asleep as soon as our heads hit the bed.  My last thoughts were of this strange country that didn’t have any traffic laws, but had little baths for our feet.

Suzy Beal, an occasional contributor to True Stories Well Told, has been writing her life story and personal essays for years. In 2016 Suzy began studying with Sheila Bender at writingitreal.com.  Watch for new chapters of her travel memoir to be posted! Please leave comments for Suzy on this post.

3 Responses to Aboard Ship, continued